The Secret's Out: It's Time to Buy Celgene

PREFACE
Celgene may simply be the most compelling biotech company in the world. With the stock down to $101 from $140 less than a year ago, now may be the time to own this biotech marvel.

RECENT NEWS
Celgene's largest drug is Revlimid and while it has been one of the greatest successes ever in biotechnology, it faced a patent lawsuit and decision that hung over the stock. News came out in late December that an agreement had been reached where Celgene would allow for generic brands to sell starting in 2026.

While that's a full year before the patent expires, we now can now rest assured that Revlimid will have more than another decade to grow and sell without competition. The stock rose 10% on the day when that news was released.


PIPELINE
Before we get into the details of what does exist, let's look at the incredible pipeline for Celgene relative to all of biotechnology in the United States. In the image below, we have plotted the number of Phase III trials on the y-axis and ranked the largest biotechs on the x-axis. 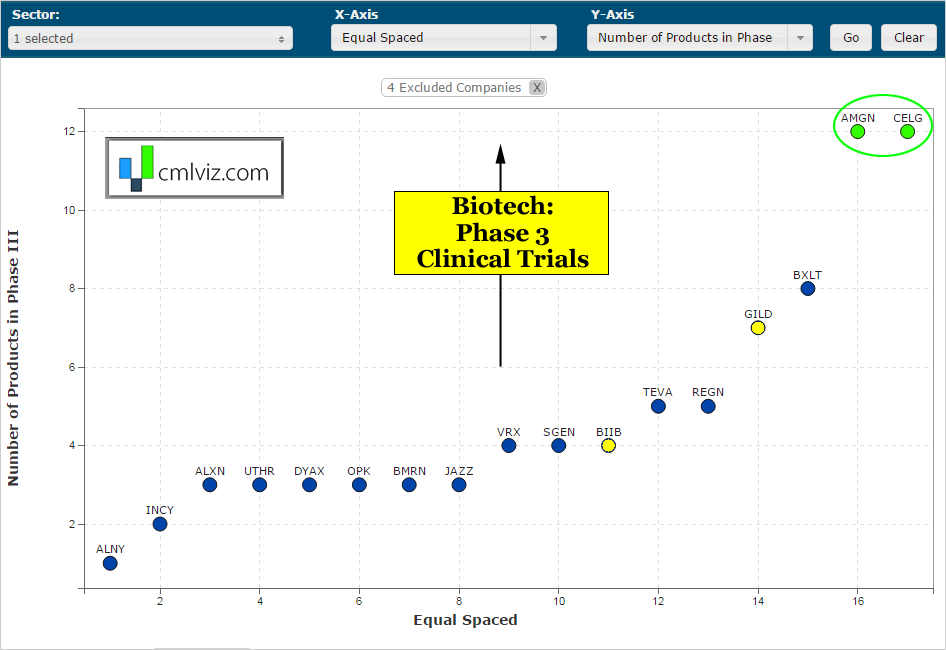 That's right, Celgene has more products in Phase III than any other biotech, save for AMGN, where it's tied.

Now we can do the same thing with Phase II trials. 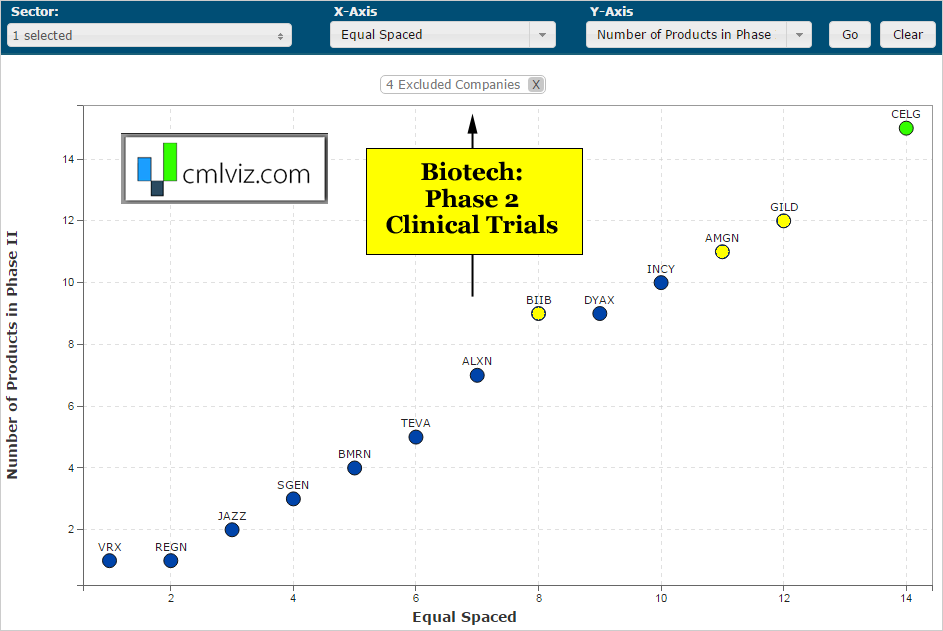 Biotech data runs deeper than headlines and deeper than the data non-professionals have access to. That advantage is no longer acceptable to us.
Try CML Pro. No credit Card. No Payment Info. Just the Power.

CURRENT PRODUCTS
In the last year, CELG has generated over $9.2 billion in revenue. Here's a chart of Celgene's revenue (TTM) over the last sixteen years.

That mountain of revenue is not only at an all-time high, it has increased consecutively to new all-time highs every quarter for the last ten years. Even given that fantastical streak, revenue is still up 20% year-over-year and 42% over the last two-years. We're talking about absurdly large growth in a mega cap biotech.

We write one story a day to uncover new opportunities and break news.
Try CML Pro. No credit Card. No Payment Info. Just the Power.

REVLIMID
REVLIMID accounts for 60% of Celgene's revenue and hit $5.8 billion in sales last year. On the latest earnings call, which Wall Street took as a 'miss,' REVLIMID generated sales of $1.56 billion which represented growth of 20% in the US and 15% internationally from the year-ago period.

But Celgene is not a one hit wonder. Here's how the Motely Fool puts it:

At its heart, Celgene is an immuno-oncology and inflammatory disease specialist. These two areas also just happen to be two of the largest and fastest-growing drug markets in existence.

Further, "Revlimid is being studied as a maintenance therapy for multiple myeloma, in first-line (ABC-subtype) and maintenance indications for diffuse large B-cell lymphoma, first-line follicular lymphoma, and relapsed/refractory indolent non-Hodgkin lymphoma. These added indications, plus growth in existing first- and second-line multiple myeloma, could push Revlimid above $10 billion in global sales by 2020" (Source: Motley Fool).

OZANIMOD
Celegene acquired Receptos for over $7 billion in 2015 and it did add a wall of debt to Celgene, as we can see in the chart below. 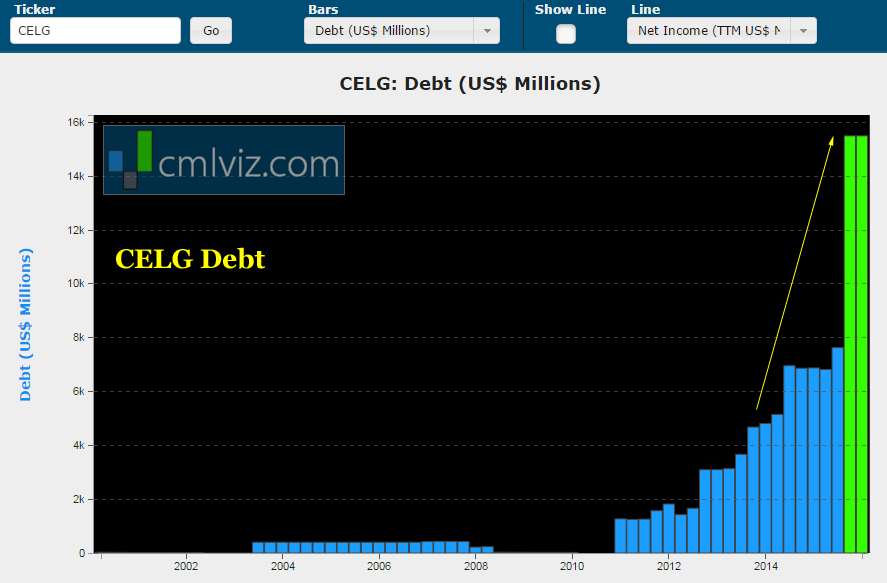 But the careful analyst sees that this is a massive win for the company.

The focal point of the acquisition was a drug called "ozanimod" that presents possible usage for multiple sclerosis and irritable bowel disorders. Upon acquisition of RCPT, Celgene made a bold case that the drug could ultimately yield $4-$6 billion in annual sales (remember, Celgene's total sales in the trailing-twelve-months is $9.2 billion). Yes, the initial forecasts from Celgene was a potential 50% growth in revenue from the acquisition.

But, it gets more bullish if you believe Celgene's management. On the most recent earnings call Celgene stunned everyone when it said... try the full research in CML Pro . This reality reflects a non-trivial possibility that this drug could run as high as Celgene's current total revenue in several years.

It has a breast, lung and pancreatic cancer treatment ABRAXANE which saw $967 million in sales in 2015 -- a 14% rise year-over-year. Myeloma drug POMALYST/IMNOVID which had sales of $983 million. Fourth quarter sales were up 29% and 77%, respectively from the year-ago period.

Finally, Celgene has the Plaque psoriasis treatment OTEZLA which saw $472 millionin revenue. OTEZLA has massive room to grow because of a unique advantage, there's every reason to believe that the growth will continue and OTEZLA has the potential to hit the "blockbuster" threshold of $1 billion in annual sales within a few years.

INNOVATION
Here is a chart of Celgene's R&D expense through time. 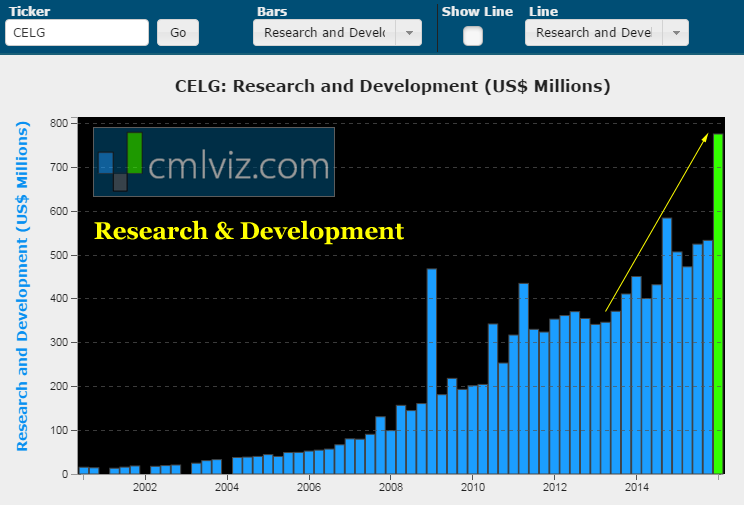 Do you enjoy understanding what's really going on in a company beyond the headline noise?
Then Join Us: Get Our (Free) News Alerts Once a Day.

THE PARTENRSHIP OF A LIFETIME
Celgene and Juno (JUNO) have entered into a ten-year collaboration that could generate a revenue base growth of 50%. Juno Therapeutics is a radical, promising and in the very sense of the word, transformational biotech. It has no revenue, but a market cap that tops $3 billion.

Here's how this company works, in English, from The Motley Fool:


"Juno's CAR-T therapeutics require the removal of a cancer patient's immune cells, selection and activation of the cells, and gene transfer to train the cells to attack the patient's tumor. At that point, the cells are grown in an incubator until there are enough to put back into the patient."
(Source: Fool.com).

That's right, the firm creates personalized cells and then reinserts them into the patient so she can attack the cancer herself. That's an attempt at curing cancer with no side effects. Here's what a recent FBR analyst wrote:


"Investors' discussions focused on the company's products in development for leukemia, lymphoma, and solid tumors but also on the science behind the treatments with questions centering on manufacturing and cell persistence. The company's pipeline is deep with 10 candidates potentially in clinical trials [] by early 2016."
(Source: Benzinga).

Juno and Celgene could revolutionize medicine, and this is yet another potential blockbuster win for Celgene, but not at the $1 billion level, at the multi-billion level.

The main stream media simply doesn't have the lexicon to understand breaking technology and biotech. It just doesn't.
Get free news alerts twice a week from us from us and you will be the expert in the room.

CONCLUSION
Celgene is very quickly becoming "The Champion of the World," and we just explained why.

The top analysts, asset managers and hedge fund managers are keenly aware of the data that will move markets and if we're not using this data, then we're trading against people that simply have more information then we do (like Phase III and Phase II clinical trial data). This is how the top 1% continue to create wealth at the expense of the rest of us.

Celegene is one of the precious few Top Picks for 2016 from CML Pro, but this was just a snippet of the fantastic reports CML Pro members get along with all the charting tools, the top picks for 2016, the single top companies in Artificial Intelligence, the Internet of Things, Cyber Security, Biotech, Banking, Consumer Services, Apparel and more. For a limited time we are offering CML Pro at a 90% discount for $10/mo. with a lifetime guaranteed rate. Join Us: Get the most advanced premium research delivered to your inbox along with access to visual tools and data that until now has only been made available to the top 1%.