Both companies are monoliths in the world of technology -- so which stock has more upside potential?

THE BATTLEFIELD
When it comes down to it, Facebook and Google are in a war for advertising dollars. While Facebook generates 97% of its revenue from ads, Google generates 80%. Facebook is the dominant mobile advertiser while Google is the absolute king of desktop ads with its search engine and ad words platform.

But now it's online video that has become the hottest battlefield. While Facebook claims it receives 8 billion video views a day, we know that Google's You Tube has more viewers aged 18-49 on mobile alone than any U.S. cable network. In fact, we can rank the top used video sites from our friends at Statista:

Now, let's put Facebook and Google in a head-to-head comparison of financials:

➤ Income Statement
* Earnings: Both FB and GOOGL show positive earnings over the last year with the edge to GOOGL.

* Revenue per Employee: FB generates larger revenue per employee ($1.4 million) than GOOGL ($1.2 million), but not enough to affect the comparison rating. Here's the chart: 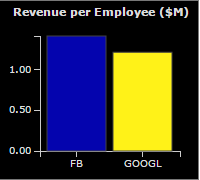 That revenue per employee number is critical. But it's the margins and growth where we see Facebook's real strength and differentiation.

➤ Margins
* Operating Margin: FB generates $1.80 in revenue for every $1 of expense, substantially higher than GOOGL's $1.34. Here's the side-by-side chart: 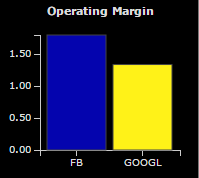 ➤ Growth
* Revenue Growth: Both companies are growing revenue but FB is growing revenue at 44% year-over-year which is massively faster than GOOGL's 14%. Here's the side-by-side chart: 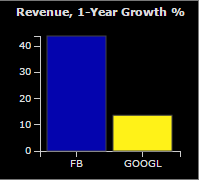 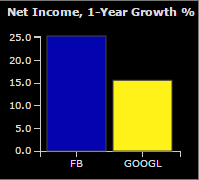 Ultimately, while both of these companies are colossal winners, we see Facebook with greater upside right now based on stronger margins, better free cash flow yield and greater growth in both revenue and earnings.

WHY ANY OF THIS MATTERS
Of course, this is just the start of analysis, not the end. There's so much going on with Facebook and Google we can't cover it all in one report - they span four different thematic shifts in technology and will battle each other for decades. But, to find the 'next Facebook' or 'next Google,' we have to get ahead of the curve. This is what CML Pro does. Our research sits side-by-side with Goldman Sachs, Morgan Stanley and the rest on professional terminals, but we are the anti-institution and break the information advantage the top .1% have.