Why Now is Time to Buy Gilead

PREFACE
Gilead has the largest revenue and earnings in all of biotech. It drives the largest revenue per employee and highest operating margins. It has the single largest drug success in the history of the industry. While the stock is down nearly 20% from its highs, it just secured two massive FDA approvals to defend two separate $10 billion franchises.

The charts we're about to look at are beyond breathtaking to borderline absurd. But after all that, the single most compelling reason to buy Gilead stock is even simpler, and perhaps, even more breathtaking.


CHARTS
Here's a chart of revenue per employee in $millions on the y-axis for all bio/pharmas over $15 billion in market cap. 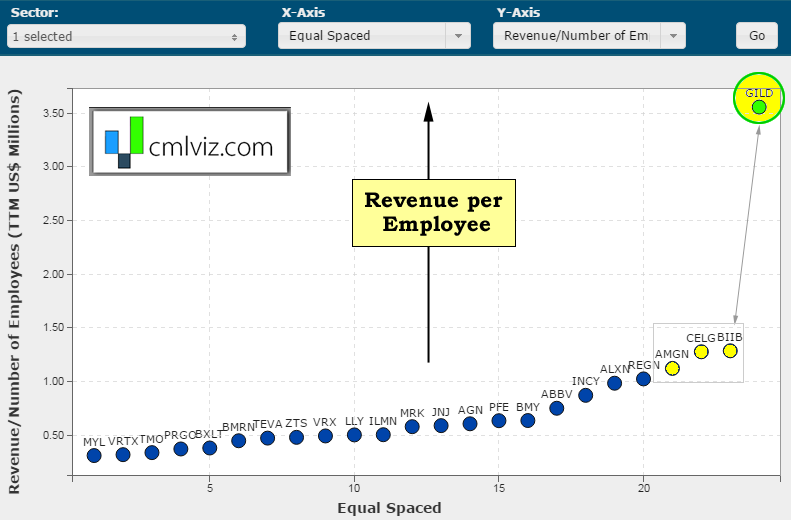 Here's our second chart. We plot the amount of revenue generated per $1 of expense on the y-axis for all bio/pharmas over $15 billion in market cap. 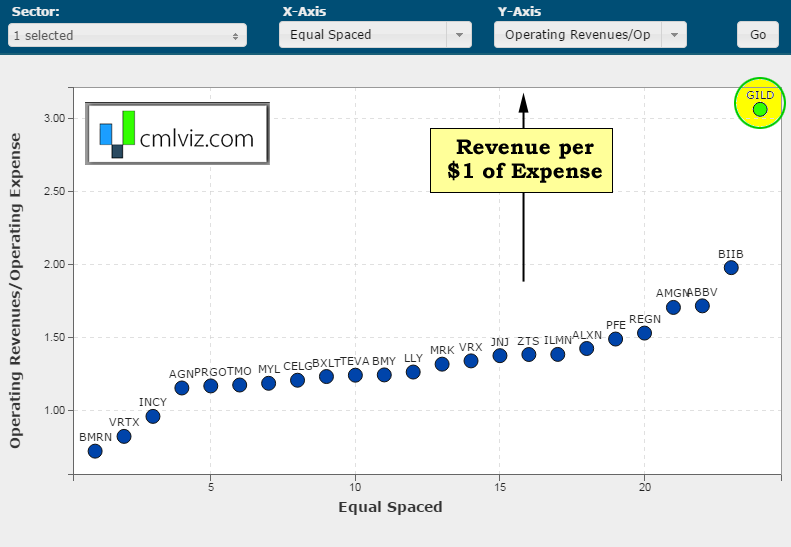 Do you enjoy using visualizations to understand what's really going on in a company? Get Our (Free) News Alerts Twice a Week.

But this isn't the reason to buy Gilead stock right now. 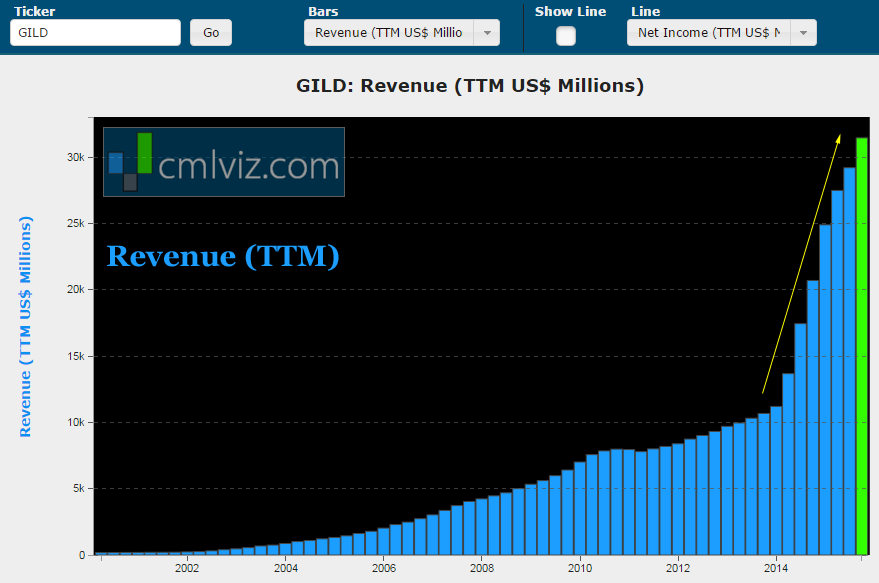 We see 52% year-over-year growth in revenue and nearly 200% growth in two-years. But, this too, is not the reason to buy Gilead stock right now.

While we have looked at revenue a lot, let's turn to actual earnings. Below we have plotted Gilead's net income (TTM) (after tax earnings). 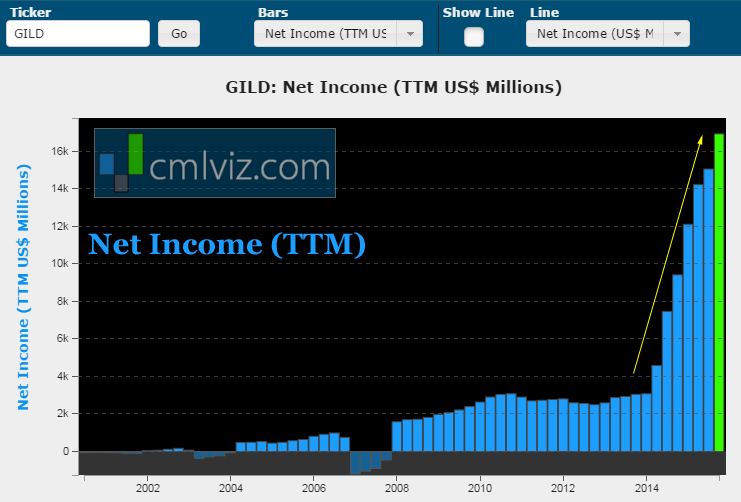 We can see earnings have risen nearly 80% year-over-year and 400% over the last two-years. But, again, not the reason to buy Gilead stock right now.

CONCLUSION
While Gilead's fundamentals are literally stronger than has ever been seen before in any biotech ever, these alone aren't the most compelling reason to buy the stock. Even further, the company defended two of the largest drug franchises ever in November with clinical trial data.

While Hepatitis C is divided into six distinct genotypes, up until now Gilead had a treatment for four of the six types. But, on September 21, 2015 Gilead reported positive results from a Phase II trial on a combination treatment consisting of Sovaldi and an experimental drug. The opportunity is an "all-in-one treatment for all six genotypes of hep C." (Source: Forbes).

But that's not the single most compelling reason to buy Gilead right now.

Gilead also owns 87% of the HIV market which accounts for nearly $10 billion in sales. But, Gilead's HIV drugs have their critical patents expiring in the period 2018 to 2022. But, on November 8th, Gilead announced that its new HIV drug, Genvoya, was approved by the FDA. Genvoya is as effective as Stribild (the current drug) but has milder side effects. European Union regulators have already recommended approval of Genvoya.

You see, the top 1% of wealth owners in the United States and their hedge fund managers are keenly aware of the data that will move markets; data that we have visualized in this article, and much more, like the data behind the most compelling reason to buy Gilead. If we're not using the same data and information, then we're trading against people that simply have more information then we do. That is a wealth losing strategy.

This is just one of the fantastic reports CML Pro members get. For a (very) limited time we are offering CML Pro at a 90% discount for $10/mo. with a lifetime guaranteed rate. Join Us: Get the most advanced premium research delivered to your inbox along with access to visual tools and data that until now has only been made available to the top 1%.