LEDE
Alphabet Inc (NASDAQ:GOOGL) quietly went where no one thought it would, and though the market has not caught on yet, it's a massive step at diversifying this mega technology company.

There are no two-ways about this story -- Alphabet is taking on Tesla, taking on Detroit and Germany -- and is creating a brand new business that could be the scale of Google.

Before we dig in, let's just take one step back and look at the remarkable revenue growth for Alphabet, even at scale: 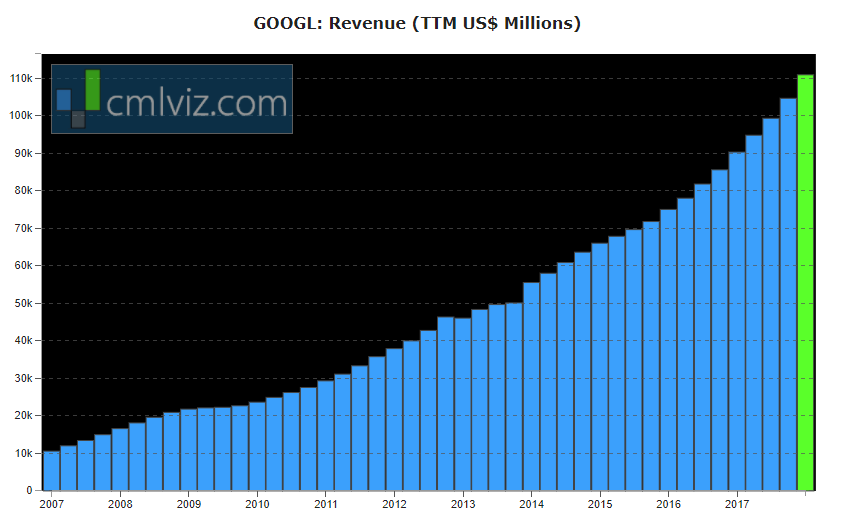 STORY
Of all places, the news broke in one of the smaller news sources we cover in real-time on CMLviz.com, but this is the story:

Waymo is the self-driving sub company of Alphabet, which we have been raving about for some time. Here is our most recent dossier covering this part of the Alphabet monolith: Google - There's More.

In that dossier we focus on the self-driving business that Alphabet's Waymo is pursuing, and how, even with a great head start by Tesla, it's Alphabet that may be the real winner when this finally plays out.

Here's a quick chart to visualize the opportunity, broadly:

We're looking at 134% compounded-annual-growth rate for the next five years ending at 10 million cars by 2020. But Google wants to create totally self-driving cars - not a vehicle which features self-driving capability.

In a tweet sent on May 9th, Waymo revealed some stunning progress on the number of miles the company has driven to help train its neural networks. Here is the tweet (click on the image to see the chart):

Here is some commentary from The Verge:


What's important about Waymo's milestone is the speed with which it logged the last million miles. It took seven years (2009-2016) to reach 2 million miles when the project was still a part of Google. Spinning the self-driving effort off into its own company in December - and adding 100 autonomous minivans to the fleet - seems to have accelerated things, because the project logged 1 million miles in the last seven months alone.


The point here is that it will take millions of miles to get this technology right and turn it into a real business and the company is doing it. And there's even better news -- or that is to say, news that proves this process is actually working.

California's DMV released its annual autonomous vehicle disengagement report on February 1st of this year and it shows that Alphabet Inc's Waymo cars are failing at a much lower rate, even as they are driving a whole lot more miles.

Here is a chart: 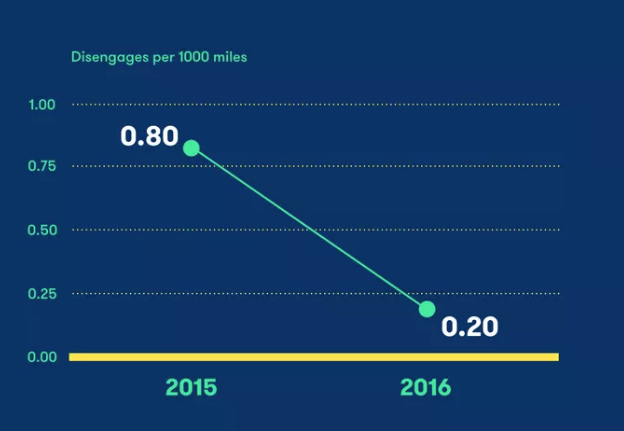 Dmitri Dolgov, the head of self-driving technology for Waymo said this:


This four-fold improvement reflects the significant work we've been doing to make our software and hardware more capable and mature.

And because we're creating a self-driving car that can take you from door to door, almost all our time has been spent on complex urban or suburban streets.

This has given us valuable experience sharing the road safely with pedestrians and cyclists, and practicing advanced maneuvers such as making unprotected left turns and traversing multi-lane intersections.


BREAKING NEWS
With all of this, one bit we hoped for, but never saw evidence for, was partnering on manufacturing, and that has happened.


Waymo has been negotiating a partnership with Honda since late 2016, when the company was still housed within Google. But now those talks are nearing completion, according to Bloomberg.

And rather than moving people, as was the focus of Waymo's deals with Fiat Chrysler and Jaguar Land Rover, the partnership with Honda will focus on delivering goods.


Waymo is ready to try co-creating a vehicle from scratch with an automaker rather than modifying existing models, as it has done with Jaguar and Fiat Chrysler. The Honda model may move people and goods, Krafcik hinted; it might be smaller than a truck and could come without a steering wheel or brakes.


SO WHAT
A partnership for actual manufacturing is a totally new world for Waymo, and it's a market that is the scale of Google. While Facebook deals with its realities of earnings all of its business from selling advertising space, Alphabet has quietly turned to other businesses.

We detailed all of them in our CML Pro dossier Google's Upside Is Absolutely Enormous and Unaccounted For.

Even in that dossier, we weren't ready for auto manufacturing.

SEEING THE FUTURE
It's understanding technology that gets us an edge. This is what CML Pro does.