Kellogg Company (NYSE:K) stock had been riding high, with extreme strength in its momentum. But, as is often the case with stocks that rally hard into a rumor of a deal, once the rumors are gone, the stock can suffer an abrupt move down. This is exactly the case we have with Kellogg Company.

CNBC writes: "Ever since Warren Buffett's Berkshire Hathaway partnered with 3G Capital to broker the merger of Kraft and Heinz last year, speculation has been rampant about which major consumer-packaged-goods company would be the next to the altar."

But, news broke today that the potential deal between the company and Kraft Heinz were now deemed "not likely" in the near term, sources close to the company told CNBC. That little dose of skepticism has pushed the stocks mountainous rally down for the day. Here's a two-year stock chart. 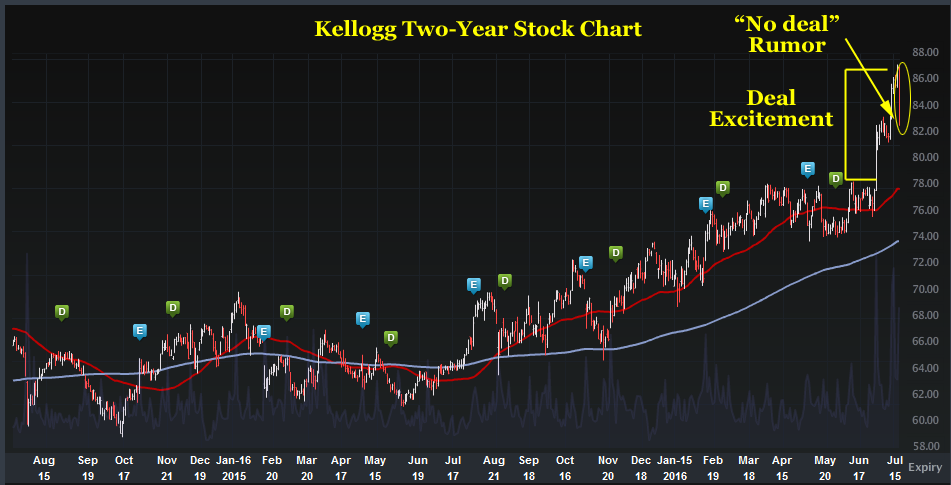 We can see a beautiful run up to multi-year highs, and now the one day drop on the possibility of a failed deal. The stock rose sharply into the rumor. Here's a snippet from CNBC:

"Speculation rose last week after a hedge fund that specializes in tracking plane tail numbers suggested that Kellogg was in talks to sell to Kraft Heinz. The rumors sent shares of Kellogg to a 52-week high Friday" (CNBC).

The option market is also showing a risk off response, with the implied volatility for Kellogg Company (NYSE:K) dropping 10% on the news. For now, the stock and option market appear to be digesting the "no deal" news as a matter of fact. Here's a quick look at what the option market is reflecting: 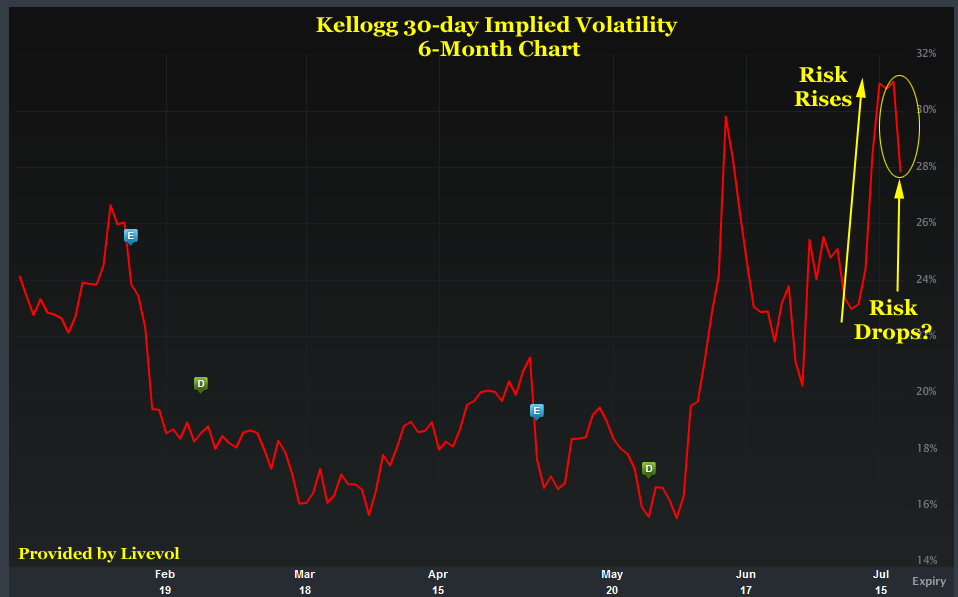 With the option market implied risk (volatility) dropping so significantly, one does have to wonder if perhaps there is now more risk to the stock price in the near-term rather than less. We leave that decision to the reader.

WHY THIS MATTERS
Our research sits side-by-side with Goldman Sachs, Morgan Stanley and the rest on professional terminals, but we are the anti-institution and break the information advantage the top .1% have.