Netflix is Tumbling: Is it a Buy?

Here's the two-year stock chart for Netflix, below: 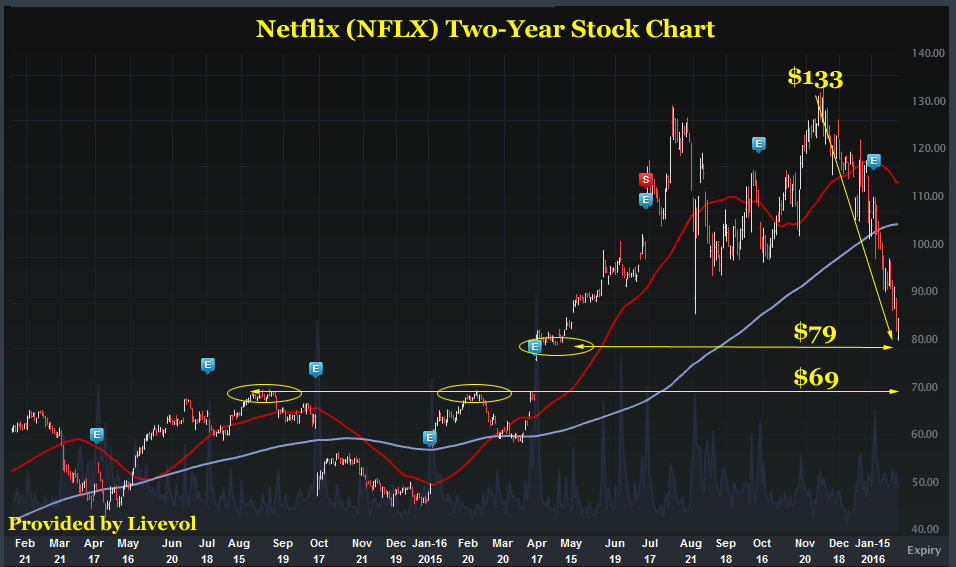 We can see that the stock is down from an all-time high of $133 to now in the low $80's. We can also see, roughly speaking, some possible areas of support should the stock fall further.

But the real question has become: "Is Now Time to Buy Netflix?"

In order to answer that question, we don't need a stock price, we need to fully understand what's going on with the firm. Stock prices fluctuate wildly, but businsses rarely do.

THE STORY
Earlier this year at the Consumer Electronics Show (CES), Netflix CEO Reed Hastings announced significantly expanded reach to 190 countries, making its Internet TV service available in 130 new markets including India -- but not China. "Today you are witnessing the birth of a new global Internet TV network."
Here's a great chart from Statsita that demonstrates the Netflix reach as of right now:

The bright green areas are the newest additions to the Netflix family of nations.

Netflix has become a colossal success because it has broken all of technology as a distributor, forever changing the way we watch TV and movies. It has won the war, and fended off some very powerful companies in doing so, making them look foolish in the process.

But, Netflix now relies more on original (exclusive) content than it used to as it has been dropping a substantial amount of other content. That allows for a new revenue source on the one hand (syndication of original content), but also means a totally new business line.

Netflix has also found its first competitor that is born of technology rather than media, and that's Amazon.com.


This is not just astonishing, it means that the company's conversion from content distributor to content creator and distributor is working on a scale simply no one in the world (even Netflix) could have imagined.

IMPACT
A content distributor without original content has a tenuous relationship with content providers. On the one hand Netflix has literally saved TV shows that were well on their way off the air until binge streaming took hold.

But, those same content creators didn't like that reliance and have started to create their own outlets to bypass Netflix. This includes DVD service from cable companies, the creation of HULU and of course, straight down the middle on demand programming from the cable providers.

But now that Netflix has created high demand, high quality original content, my goodness, it has turned into its very own border-less cable bundler. And, the more subscribers it gets due to its own content, the greater power it holds over the other content providers -- more eyeballs means more power, period.

Here's a chart of the company's all-time revenue chart: 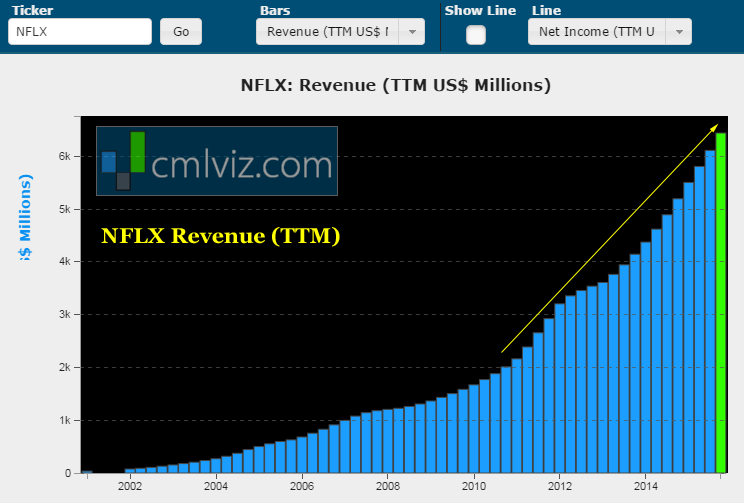 Revenue is up 23% year-over-year and has hit an all-time high essentially every time the company reports earnings. But, recent news has shown us that domestic demand has slowed considerably. Here's the chart from 2011 through 2015: 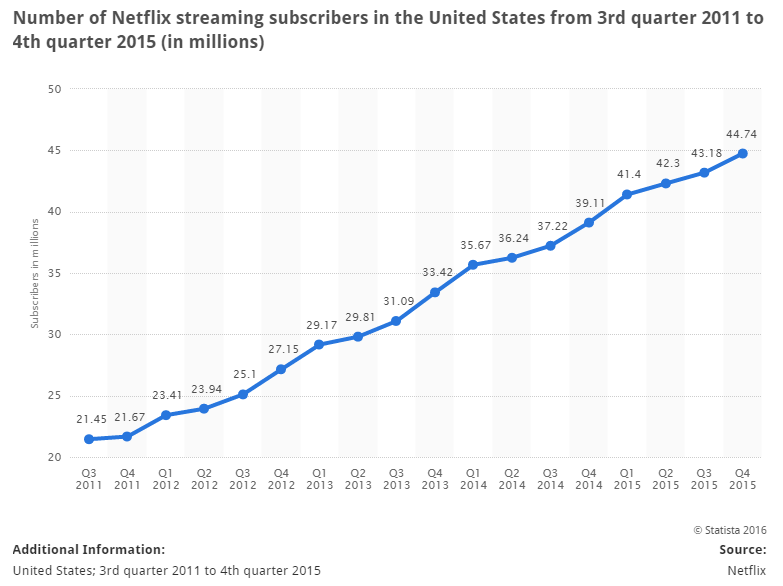 
We can see 14.4% annual domestic subscriber growth and just 3.6% quarter-over-quarter. That means growth is going to have to come from the upcoming international expansion, and that has enormous risk.

The media simply isn't equipped to understand technology beyond headlines.
Try CML Pro. No credit Card. No Payment Info. Just the Power. All of the Visualizations.

RISK
We will see great growth internationally for the next few quarters, but make no mistake, Netflix may be going through the largest pivot any large cap tech firm has gone through in a decade and the implications are huge. First, here are the forecasts for total Netflix subscribers (worldwide). 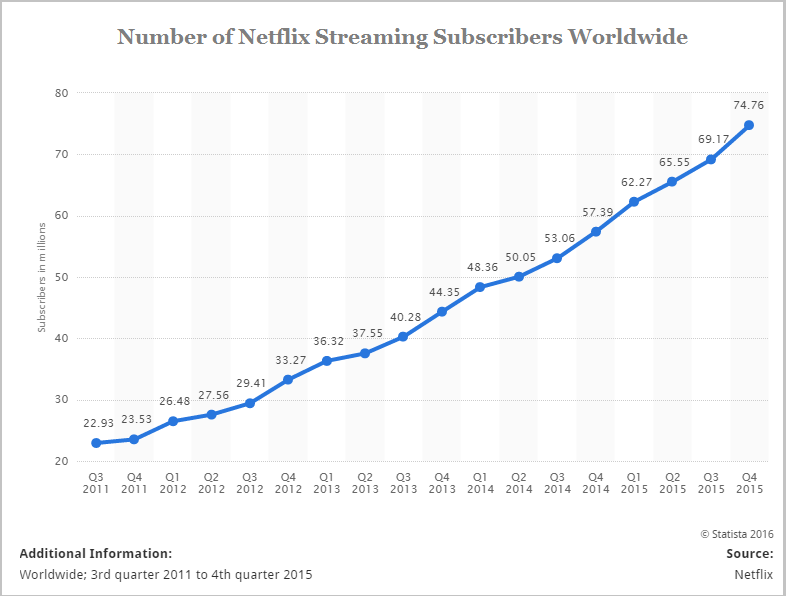 
The jump from 70 million in 2015 to 115 million by 2020 is coming almost exclusively from international expansion.

The company is going to need a billion dollars a year for the next couple of years to reach its expansion goals internationally. Netflix is betting the house on this expansion. Look what happens to that revenue chart when we add cash from operations in the orange line: 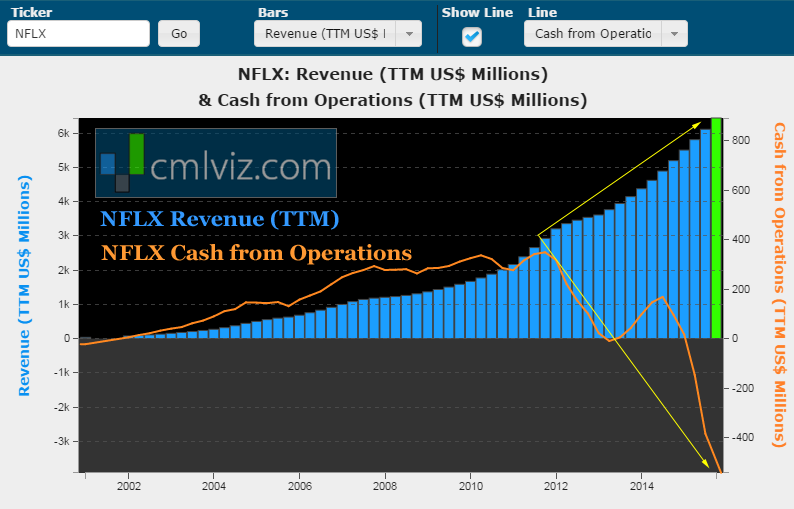 The incredible divergence between revenue and cash from operations means Netflix is going to have to go to the market for some more debt. Here's how that trend looks as of today, and CEO Hastings clearly said that Netflix may have to go out and borrow more. 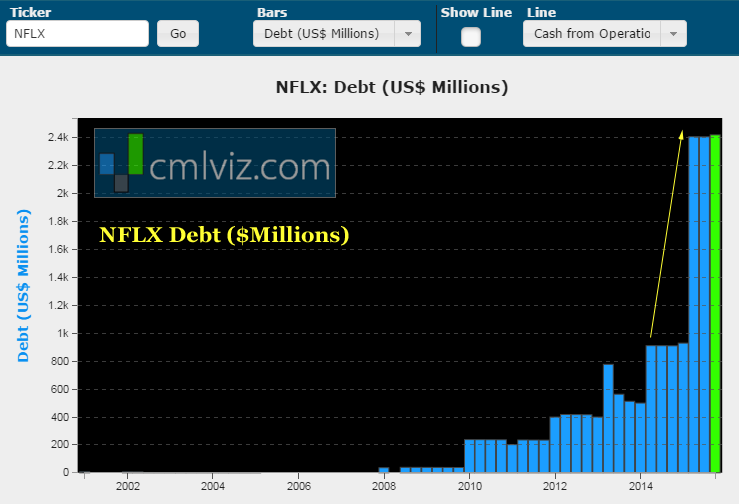 Debt now sits over $2.4 billion and should rise well over $3.5 billion in the near-term.

THE STAKES
Netflix is attempting to be the only global all-in-one content provider this planet has ever seen, and whether valuations feel stretched or not, a $35 billion market cap pales in comparison to what this company would be worth if successful. Yes, I'm saying that the price today is low if Netflix is successful.

All of the focus should be on the success of this incredible expansion and ambitious endeavour. The revenue streams Netflix will produce from higher subscribers will be substantially expanded with revenue from original content licensing and syndication.

Do you enjoy understanding what's really going on in a company beyond the headline noise?
Try our free news alerts once a day.

WHY THIS MATTERS
If any of the information we just uncovered feels like a surprise, in many ways it is. These charts, data and trends are known by analysts that represent the wealthiest 1% but they have no interest in sharing.

Back to the original question: Is Now Time to Buy Netflix? We answer that question specifically in CML Pro as well for the other 'Top Picks' that are breaking down the doors of artificial intelligent, the Internet of Things, Cyber Security, driverless-car technology and many more themes. The information asymmetry that exists between pros and non-pros has transferred massive wealth to the top 1%. That information asymmetry is no longer acceptable to us. In fact, it infuriates us.