This is a snippet from the original CML Pro dossier published on 6-20-2017.

LEDE
Nvidia Corporation (NASDAQ:NVDA) is a Spotlight Top Pick that continues to disrupt several industries that shows more upside in those businesses even as the stock prices soars to new all-time highs, almost weekly.

Today we look at the cognition problems Wall Street and the main stream media have with the opportunity. 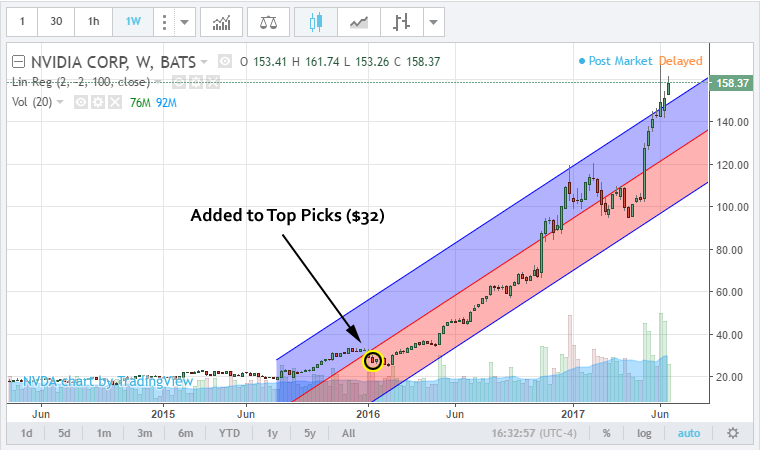 The marvel behind Nvidia stands squarely on the footing of its strategy to become the driving force underlying large technology segments and to power those segments with every major company. This edge allows the firm to benefit from segment growth, rather than to make a bet on any specific provider. With new product development and continued innovation, NVDA is a true technology disruptor.

While we lay out the magnificent opportunities ahead for this company in our Top Pick dossier The Crown Jewel of Technology's Future, we want to focus on another part of the story today -- cognition.

But it's the reason behind "there's more" that we are after today, and that reason is cognition.

COGNITION AND A NEW OPPORTUNITY
The gaming side of Nvidia's business still makes up more than half of revenue, and while it's plainly clear that the company has several burgeoning new businesses with the cloud, self-driving cars, healthcare, and several other fields, one area that the world didn't even know existed five years ago is the move to crypto-currency mining.

The gaming segment normally shows a bit of a lull in this part of the calendar year, the new found demand for Nvidia's GPUs within crypto-currency mining may have nicely brushed aside the normal cyclical lull, and that's cause for yet another stock rise and a reminder.

Michael McConnell is an analyst at Pacific Crest and he just got back from his trip to Asia, which is home to several distributors of Nvidia's GPUs. Here is a snippet of what he found (with our emphasis added):


Meetings with desktop graphics card manufacturers indicated a sharp reversal in sales trends expected for the seasonally weaker 2Q, with surging demand from cryptocurrency miners in China and Eastern Europe since early May[].

We note this is a significant decrease from excessive desktop graphics card inventory levels of 2.5 to 3.5 months in China, and 1 to 1.5 months in the U.S. entering the month of May.


WHAT THIS IS NOT
We're not ready to jot down a new check box indicating a totally new business line for Nvidia, but what we are prepared to do is remind everyone that the demand for accelerated computing, whether it be for artificial intelligence and machine learning or other uses, is rising.

Any attempt to draw a line in the sand that indicates the potential growth is going to come up short, broadly, due to new uses and demands that we aren't even aware of yet. There is a cognition problem when valuing this market because the public (and Wall Street) doesn't understand it yet -- and that could mean more upside when we look over the long-run -- as in, 5-10 years and new markets that are not understood come to fruition.

Crypto-currency mining likely isn't a whole new business line for Nvidia, but rather a reminder that faster, smarter, and better in computing will never end, will never run out, and will never be satiated.

And while we're at it, we can hammer the point home with another Nvidia story, in yet another specialized business segment that in and of itself is small, but can be an indicator of the future.

Going further, Nvidia released performance data on the new hardware, and it shook the competition:


NVIDIA Tesla GPUs have improved performance for HPC applications by 3X over the Kepler architecture released two years ago. This significantly boosts performance beyond what would have been predicted by Moore's Law, even before it began slowing in recent years.

Additionally, NVIDIA announced that its Tesla V100 GPU accelerators -- which combine AI and traditional HPC applications on a single platform -- are projected to provide the U.S. Department of Energy's (DOE's) Summit supercomputer with 200 petaflops of 64-bit floating point performance and over 3 exaflops of AI performance when it comes online later this year.


Not to be outdone, Nvidia's future release this year will be yet more impressive:


While a lot of that, or all of that, may be a bit too technical, it doesn't matter -- the point again is that demand for (and acceptance of) accelerated computing is in the early stages and we see it in niche markets like crypto-currencies and super-computers, as well as massive markets like data centers (read: the cloud) and self-driving cars.

Nvidia is the leader in a market with growth that is hard to pin down other than to say, we know it's big, we know it's growing and we know we don't know how big it can be or how fast it can grow. And this, is the point. The upside is misunderstood.