Nvidia's New Chip is a Marvel; Catastrophe Headlines are Overblown

LEDE
A Spotlight Top Pick is making news -- and it re-iterates the bullish thesis while pouring cold water on overblown headlines.

Nvidia recently announced its Volta chips. First, here is what the company said:


NVIDIA Volta is the new driving force behind artificial intelligence. Volta will fuel breakthroughs in every industry. Humanity's moonshots like eradicating cancer, intelligent customer experiences, and self-driving vehicles are within reach of this next era of AI.


When we look at the technical specs we see that Volta has over 21 billion transistors and 5,120 CUDS cores, making it the most powerful GPU architecture ever (according to the company). AMD's Vega 10 houses 12.5 Billion transistors on 4096 cores.

Here is a nice image with side-by-side comparisons:


Nvidia's data center business is booming, which we discussed in detail in the dossier The Real Reason Nvidia is Hitting New Highs, published on 11-10-2017.

Of all the businesses that Nvidia is in that are the future of technology, the data center (aka cloud) is present - it is today, not 5-years from today. It is the only business outside of gaming that can have a real impact on revenue and earnings in the immediate-term, as well as the next decade.

While Wall Street got spooked two quarters ago, last quarter Nvidia surprised everyone, and quelled fears with its data center business. In this case, one image says it all: 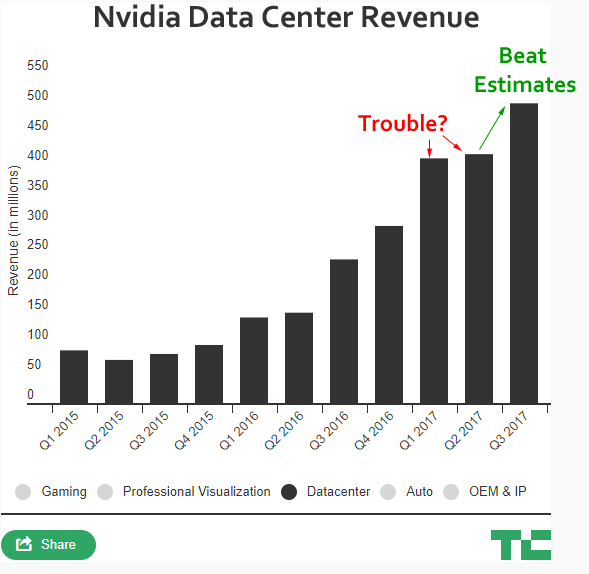 Amazon, Microsoft, and Google purchase from Nvidia, at scale, and this business line is a winner, right now. Tencent, Alibaba, Baidu, Facebook and Oracle also rely on Nvidia chips for their clouds.

And then a comment from Goldman Sachs right after the last earnings call:

"The ramp of Volta seems to be tracking well, and more importantly, has significant runway ahead, in our view, as a broader set of customers adopt the new architecture in the coming quarters."

THE REAL NEWS
There has been an article floating around from MarketWatch entitled "A warning to Nvidia and AMD: GPUs may not hold AI chip crown forever."

Even further, Forbes notes that there has been speculation that fixed function application-specific circuits (ASICs) might one day eclipse NVIDIA's GPU-centric approach. This argument has been fueled in part by noting Google's investment in its own custom ASIC for Deep Learning inference, the TensorFlow Processor Unit (TPU).

Nvidia responded by its own ASIC technology and also announced that it will open source this technology to enable others to build chips using this technology. It's called the TensorFlow Processor Unit (TPU). We get this from the company, now (our emphasis added):


Equipped with 640 Tensor Cores, Volta delivers over 100 Teraflops per second (TFLOPS) of deep learning performance, over a 5X increase compared to prior generation NVIDIA Pascal™ architecture.

A key differentiator for Volta is its Tensor cores, which enable it to process matrix multiplication operations in a highly efficient manner - key for neural network training.

Nvidia's Tensor cores are specifically designed for AI systems, and are 12 times faster than the company's previous series of chips, according to the company.

In an article from Quartz entitled "Despite the hype, nobody is beating Nvidia in AI", we can take a step even further back which reveals the rest of this narrative. Nvidia Founder and CEO Jen-Hsun Huang said "a GPU is basically a TPU that does a lot more."

As a note -- TPUs are custom-built for AI only, which means they're inefficient at tasks like transcoding video into different qualities or formats. It's that reality which prompted Jen-Hsun Huang to make his comments.

So, while Google explicitly mentioned performance improvements in its TPU over Nvidia's GPU technology, which were, of course, based on Nvidia's older technology, Nvidia is still the leader and (obviously) has its eye on the future.

That Quartz article goes onto read (our emphasis added):


Nvidia has also been investing since the mid-aughts in research to optimize how machine-learning frameworks, the software used to build AI programs, interact with the hardware, critical to ensuring efficiency.


And while TPUs have an inarguable lead over GPUs in small independent tests, Nvidia is breaking the barriers with its GPUs and, now, its TPU technology.

IN SUMMARY
Google created a custom ASIC that beats general-purpose hardware for a very narrow application -- as in, it can only run Google's machine learning. Having said that, let us never underestimate Google, its deep pockets and history for innovation.

Still, there is no reason, in our opinion, to believe the catastrophe headlines. Nvidia has a large lead in main stream 'everything AI,' and will quite possibly take the lead in application specific technologies as well.

As a further reminder of Nvidia's incredible success in cloud hardware, have a read of the last four CML Pro dossiers:

We maintain our Spotlight Top Pick status on Nvidia, see competition as a natural evolution and evidence of a booming market. Nvidia has market share, better technology and we have every reason to believe this lead will be maintained (if not grow). As for the data center business in and of itself, we have this trend as a tailwind:

The worldwide public cloud market is forecast to rise from $154 billion this year to nearly half a trillion dollars by 2026.

The author is long shares of Nvidia at the time of this writing.