This is a snippet from a CML Pro dossier.

Here are our most recent three dossiers on Invitae:

02-24-2019 Invitae's Journey to Become the Amazon of Genomics: Interview With CEO

Story
By now you should all be well aware and deep in the guts of the Invitae story, as we have covered it from a tiny thought to a full blown $2 billion market cap.

We are analysts of record making us one of only eight firms in the world that cover Invitae in the world renown Thomson First Call (Refinitiv) analyst group. 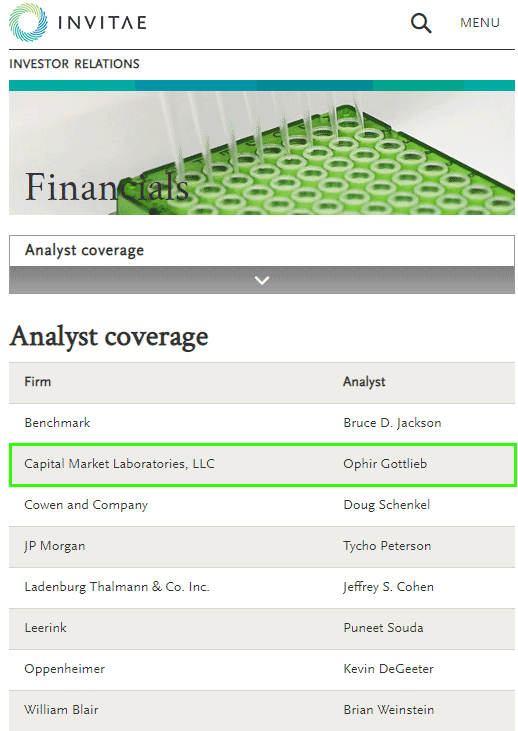 The title seems innocuous enough, but the impact of the press release is rather large. Here are a few snippets, directly from the note, and then our commentary.

* Laboratory services are often the starting point to any medical procedure. During a doctor's visit, a physician will recommend lab work about 50 percent of the time.

* UnitedHealthcare is working to make it easier to identify and choose lab providers [] through the newly established Preferred Laboratory Network (PLN), physicians and their patients are likely to receive better health care value through improved access, quality and service at a lower cost.

* The creation of the PLN is an advanced way to work with selected lab providers to deliver care that places a greater emphasis on patient outcomes and the total cost of a person's care.

* Launching on July 1, 2019, UnitedHealthcare has selected the following labs to participate in its PLN: AmeriPath/DermPath, BioReference, GeneDx, Invitae, LabCorp, Mayo Clinic Laboratories and Quest Diagnostics. These labs were selected based on a rigorous quality review process.

* Choosing a lab in the PLN may lead to shorter wait times for services, online scheduling for patient service centers, higher quality of care and lower cost.

* Services accessed through the PLN are at a lower average cost than other lab providers.

* We expect physicians who refer to labs in the PLN to notice prompt turn-around times for lab results, ease-of-use when ordering labs electronically as well as easy access to physician-to-lab medical director consultations to support patient care.

Analysis
Invitae already has a coverage moat which we have discussed for nearly three-years now.

When Sean said in our one-on-one interview "this is going to be a winner take most industry," a part of that stems from the reality the getting payors (read insurance companies and medicare) to just pay for the tests that have been delivered is actually a real sticking point.

But Invitae has a special moat -- and here it is, in one old chart and one newer chart. 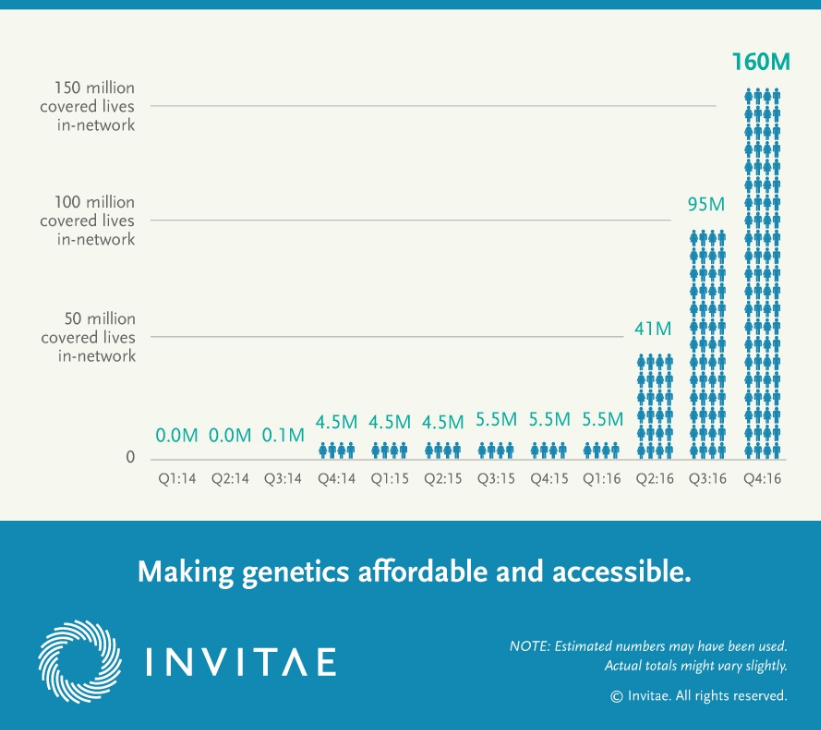 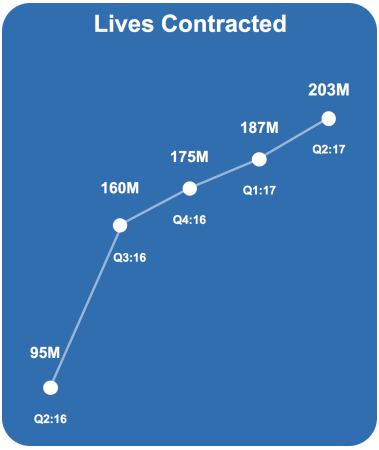 But from their 10-K, we get this (our emphasis added):

As of December 2018 , we have entered in to contracts for laboratory services with payers covering approximately 264 million lives, comprised of Medicare, most national health plans, and Medicaid in 37 states, including California (Medi-Cal), our home state.

When insurance covers a certain firm, the collections start to move more quickly.

Invitae's tests are basically covered for "all" people.

Those 50 million people are now going to have a Preferred Laboratory Network of just seven labs, and Invitae is one of them. And, as one moat grows, so grows the other.

The Machine Learning Moat
There is no other genomics company that we're aware of that has even conceived of the idea of a network, not to mention building one. Invitae is singularly focused on this, and for good reason -- it's the basis for a multi billion dollar business.

Here is what the company presented and CEO Sean George re-iterated nearly a year ago.

* The best way to build the future, is a network of information managed on a patient in order to improve health care at a lower cost. The more patients we can get with more novel information with more industry partners to improve their outcomes.

* Like all new network business, the value of the network increases with each new patient, entry, data point.

Now recall, according to Invitae , the addressable market for this network is all the people in modernized health care systems – that's 1-2 billion people.

I was given a tour of Invitae's proprietary technology – something that Sean called their "Bloomberg terminal" for genomics, which is an accurate description. It's a powerful dashboard that pulls in data, some of which is built with machine learning (ML) and AI, and an impressive repository of on demand research in real-time which is accessed with every sample and variant they receive.

Sean relayed a story to me that one of their new hires that came from a different genetic testing company started using the dashboard and simply noted that he could do 100 times more testing (this was a little hyperbole, of course) and analysis due to the technology when compared to his former firm and its (literal) paper based research and Google searches.

I left that part of the tour thinking both that Invitae has a legitimate moat that no one really seems to understand, and that other genetic testing companies may be doing more harm than good.

That second thought has been reiterated by recent NY Times articles surrounding 23andMe and that nearly 90 percent of participants who carried a BRCA mutation would have been missed by 23andMe's test, geneticists found.

I also understand fully now that this field is not about collecting blood, running it through an Illumina machine, and getting a test result. It's vastly more complex, and requires exceedingly high expertise per scientist and even then, would be in sufficient without the addition of exceedingly strong technology to help the scientist.

Further yet, a piece of Sean's "Genomic Network" became ever clearer when I understood that the ML and testing conclusions get stronger and more accurate as data grows, and that is exactly how other technology moats are built, like Facebook, for example.

Keep in mind that with each new sample they receive that's more data. More data means better results, which means higher utility, which will likely bring in more data, which will mean even better diagnostics. It is self-fulfilling.

Here is a chart of Invitae's samples (number of tests): 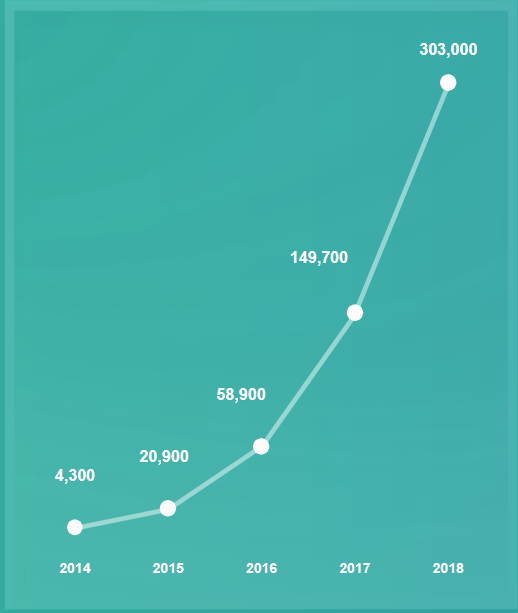 The company has guided that number to at least 500,000 for 2019. Look for a beat there -- a big beat. This new declaration from United Health Care should drive more business yet, and drive the learning moat yet deeper.

CONCLUSION
The genetic diagnostic industry, as we know it, is dead. Those are the words of CEO Sean George to me in our interview. The future is a network, in which there will be essentially one winner, where information is used by the entire network and patients are treated throughout their lifetimes, likely, for some, from birth to death. Not to address just an one-time fear or event, but an entire life cycle. This news furthers the bullish thesis for Invitae.

Invitae's selection as one of the seven in United Health Care's new PLN furthers that network -- and that furthers the bullish thesis for Invitae. It's understanding technology that gets us an edge to find the "next Apple," or the "next Amazon." This is what CML Pro does. We are members of Thomson First Call -- our research sits side by side with Goldman Sachs, Morgan Stanley and the rest, but we are the anti-institution and break the information asymmetry.

The precious few thematic top picks, research dossiers, CEO interviews, and alerts are available for a limited time at a 80% discount for $29/mo. Join Us: Discover the undiscovered companies that will power technology's future.

The author is long shares of Invitae and long call options at the time of this writing.