Roku, ROKU One-on-One with Roku CEO, He Notes: There is Huge Upside in Account Growth

One-on-One with Roku CEO, He Notes: There is Huge Upside in Account Growth 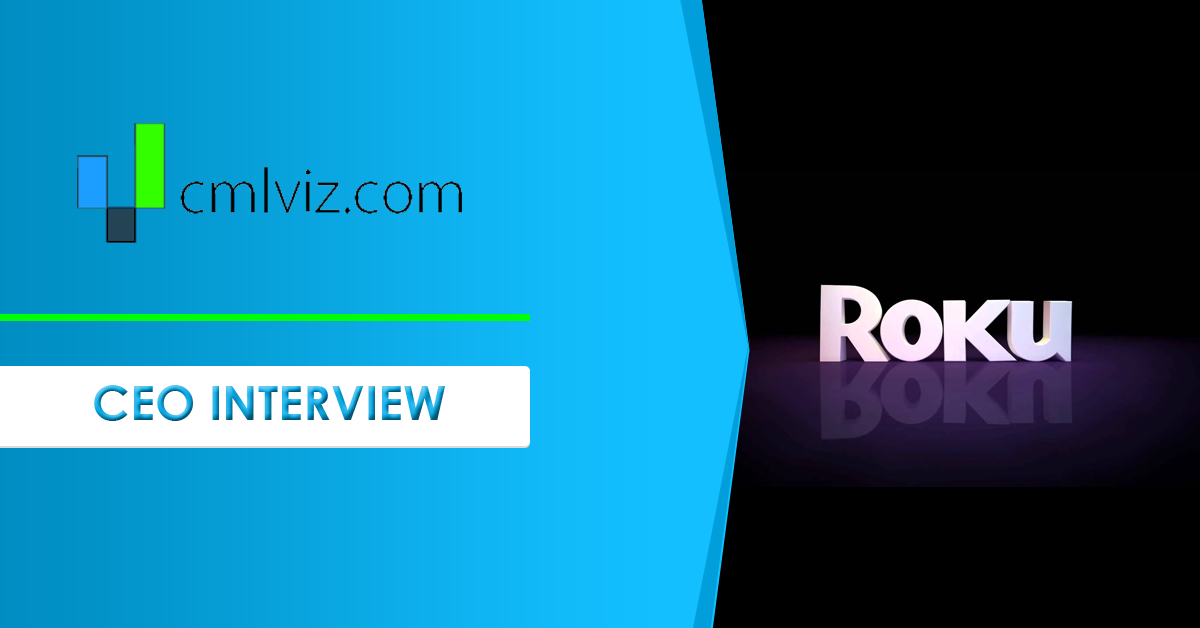 One-on-One with Roku CEO, He Notes: 'There is Huge Upside in Account Growth'

This is a snippet from CML Pro.

The market's reaction has been violently bad. We spoke with the CEO, and he is as bullish as ever. So are we.


We'll first cover the actual earnings numbers, then turn to the interview.

* Platform revenue: $100.1 million (up 74% year-over-year) versus analyst estimates of $103.2 million. That was the miss. It did represent 58% of total revenue vs. 46% a year ago with over two-thirds coming from advertising services.

* The company saw 100% video ad sales growth in the quarter.

Platform revenue is, correctly, where Wall Street should be focusing. Roku is now a full-blown ecosystem play, not a hardware play.

Active Accounts: 23.8 million, up 43% year-over-year, versus estimates of 23.1 million, with more than half of new accounts coming from licensed sources, primarily Roku TVs.

* Guidance: Roku raised full-year revenue guidance to a range of $722 million to $732 million, which is above the fiscal year forecast by analysts of $722.84 million.

That forecast moves 2018 revenue to increase 42% year over year. That's up from Roku's target of 40% given just last quarter and the 31% forecast growth at the start of the year.

* Gross Margin Guidance: The company raised full-year gross profit outlook growth to 63% year-over-year, up from 61% previously and from 43% year-over-year when the company provided its outlook at the beginning of 2018.

Those were all facts.


Tiernan got on the phone with CEO Anthony Wood for us, and here is that conversation, along with some statements he made during the earnings conference call itself.

On the conference call Wood noted the company's continued double-digit growth in subscribers, he remarked, "There is huge upside there." And regarding the company's monetization of those users, via fees and ads and sponsorships, he added ""we still have a ways to go there till we tap that out."

Mr. Wood went on to say (our emphasis is added):


We had a really great quarter, we beat our outlook for the fifth quarter in a row, meaning that in all five quarters now since we went public, we've beaten.

And, I would say, they should focus on some of the metrics that matter most, including active accounts and average revenue.


Wood also boasted of the company's software continuing to be the "number one licensed TV OS in U.S.," shipping one in four smart televisions sold in the U.S. He noted that video ad sales, the single biggest component of Roku's platform revenue, had more than doubled, and that:

Another important metric, average revenue per user, or ARPU, rose by 37%. That is attributable both to growth in active accounts, and also the ways Roku is able to monetize the accounts.

On both scores, Wood emphasized what he sees as substantial upside.


There is huge upside there [in active account growth].

There are a billion broadband subscribers, worldwide. [And] monetization per user grows as people watch more TV; we still have a ways to go there till we tap that out.

And it [monetization] grows as we create more ways to upgrade our software, with new forms of advertising and advertising measurement. That has also a ways to go.


The Roku Channel, a free, advertising-supported collection of programming, introduced a year ago. His comments surrounding that were:


[The Roku Channel has] become very important part of ad inventory, and of how we deliver ads, and as a source of engagement.


Asked about the Web-based version of the Roku Channel, which went live a quarter ago, Wood said it is "going well," but that it was "still too early to tell" what kind of contribution it is making, or will make, ultimately.


The strategy for the Channel is to keep adding more platforms, and regions, and content categories, including the recent addition of news channels.


Wood commented on the rising activity in linear television advertising initiatives. For example, a venture-backed startup called EDO that analyzes millions of TV spots to try and correlate them with consumer behavior. He seemed unfazed by the competition.


We are confident that OTT [over-the-top] advertising that is one-to-one targeted, that native internet advertising, is a superior solution to the legacy advertising available on linear TV.

OTT brings things such as measurement and knowledge of the customer that are so important, that linear TV just can't offer.

The bullish thesis for Roku appears to be stronger, not weaker, after this earnings report.

Every advertisement on ROKU to its users is custom for that individual user. Further, according to Nielsen, 10% of 18 to 34-year-olds in the U.S. are only reachable on the Roku platform in the living room.

Not only are tens of millions of people totally unreachable by traditional TV, even the ones that are, if they are on ROKU, they get personalized ads. That reminds me of two other companies that did this to create two of the six largest companies in the world: Google and Facebook.


So, yes, we can see, from a third-party verification, that the idea of personalized TV ads, which a few years ago seemed like an absurd proposition, are working.

We learned in the first week of November that:

Over the past 12 months, streaming TV services have seen a 292% increase in plays and a 212% increase in viewing hours, while publisher apps have seen declines of 16% and 19%, respectively, across those fronts.

And right when people thought mobile was everything and streaming TV in the living room was in trouble -- no.

Connected TVs - such as those connected to Roku players, Amazon Fire TV, Apple TV, etc. - now account for as many streaming TV plays (38% on TVs) as mobile devices (39%). They also account for more than twice the viewing hours, with a 56 percent share to mobile's 25% share.

Research firm Conviva noted that Roku accounted for 40% of viewing hours, while Amazon fast growing still only made up 18%.

Here is a chart of the average weekly time spent with over-the-top TV in the United States (in hours): 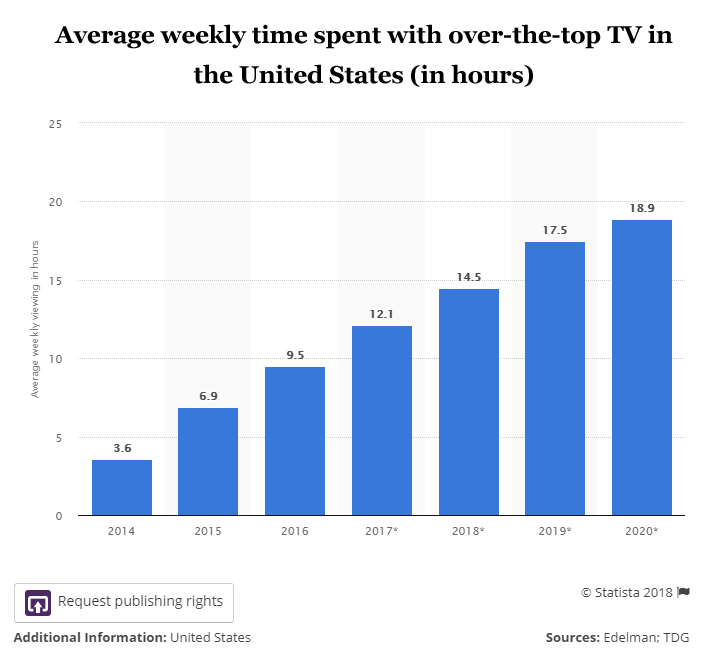 Another way to see this thematic is through the pay TV penetration rate in the United States. 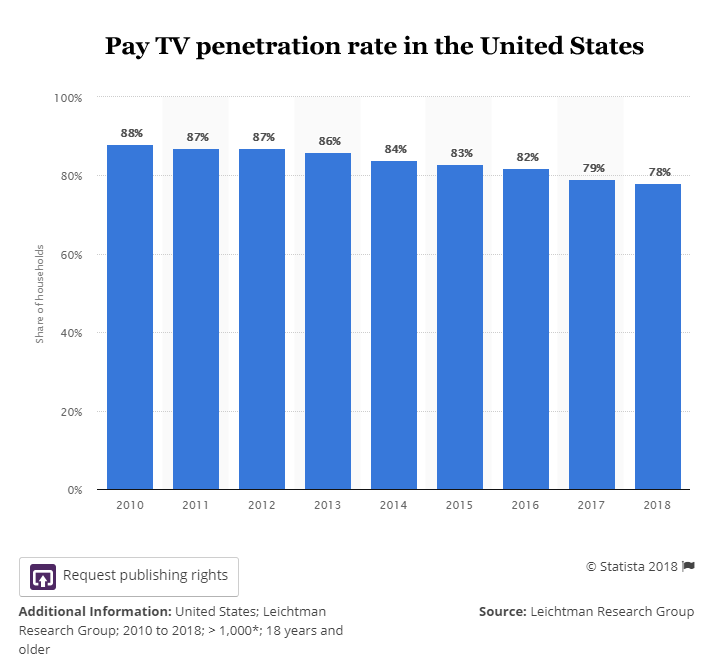 There are so many ways to show it -- that streaming OTT devices are the future and that traditional pay TV cable is not. Remember, now this is critical, not only are consumers pushing away from cable TV, but advertisers actually prefer the streaming model.

When consumers move in a direction that pleases the money (the advertisers), it happens faster. Roku is the undisputed leader, is growing faster than its own forecasts, and has yet to even scrape the tip of the iceberg for this massive thematic shift.

We are looking well beyond the next few years with Roku - toward a tectonic shift away from linear TV, where streaming is everything. A world where content is so rich, that Netflix, Amazon, Google, Disney, Apple and many others will compete for eyeballs, while Roku simply gives them access to the eyeballs.

It's no certainty that Roku will win, but we try to find companies that are ahead of the curve, that play a vital role in the guts of technological themes, and for now, we see Roku as one of those small companies with the potential to grow substantially.

We're not sure Wall Street understands the company, but when we look under the hood, we see a robust hardware, advertising, and platform business. We see a company that happily gives up gross margin on hardware, because the real gold mine is simply getting people to stream video -- because, in the company's view, there is a very good chance they will be streaming with Roku powering the platform.

The author is long shares Roku, at the time of this writing.