BREAKING
Starbucks Corporation released earnings after the market close and the company missed on revenues and earnings per share. The stock is dropping slightly in the after-hours trade.

STORY
Starbucks reported $5.24 billion in revenue for the quarter which was a miss to analysts' expectations of $5.33 billion. The revenue miss appears to have come from slower same store sales growth than expected. Starbucks Corporation reported same store sales growth of 4% in what the firm refers as the "Americas," while expectations where as high as 6% and last quarter's number showed a robust 7% growth.

Earnings per share came in right on analyst expectations of $0.49.

THE GOOD
While the revenue miss and slowed same store sales for Starbucks Corporation have pushed the stock down about 4% in the after-hours trade, there was good news. The company's loyalty program grew 18% year-over-year and now stands at over 12 million members. But that number is meaningful.

Starbucks Corporation has more money on cards than some large banks have on deposit. 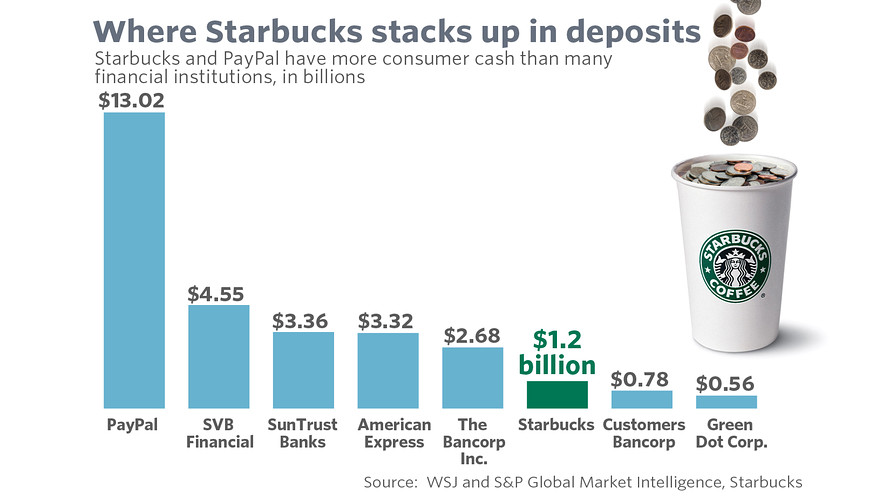 As of fiscal 2016, "41% of Starbucks transactions in the U.S. and Canada were conducted using a Starbucks card" (MarketWatch). If we add into the equation the new cold brew coffee and the addition of a fresh bakery, Starbucks Corporation still has room to grow by expanding its store productivity.

While the company has the morning commute taken care of, the new drink menu including cold brew and the fresh bakeries have broadened the time window for productivity of stores and as that trend catches on, Starbucks Corporation (NASDAQ:SBUX) could find itself with a growing revenue and earnings base with the same infrastructure.

The author is long shares of SBUX.

WHY THIS MATTERS
Though it may seem odd, Starbucks is actually one of the most innovative companies in the world when it comes to mobile payments. While companies like Apple, Google and PayPal come to mind, Starbucks is equally as innovative. But, there is one company, one technology, that is powering all of mobile payments, and it doesn't matter if it happens on an iPhone, Apple Watch, Google Watch, Samsung Pay, or anything else. It's this company that invented and patented the technology behind it and already has 1.5 billion chips in devices.

It's identifying trends and companies like this that allows us to find the 'next Apple' or the 'next Google.' This is what CML Pro does. Our research sits side-by-side with Goldman Sachs, Morgan Stanley and the rest on professional terminals, but we are the anti-institution and break the information advantage the top .1% have.