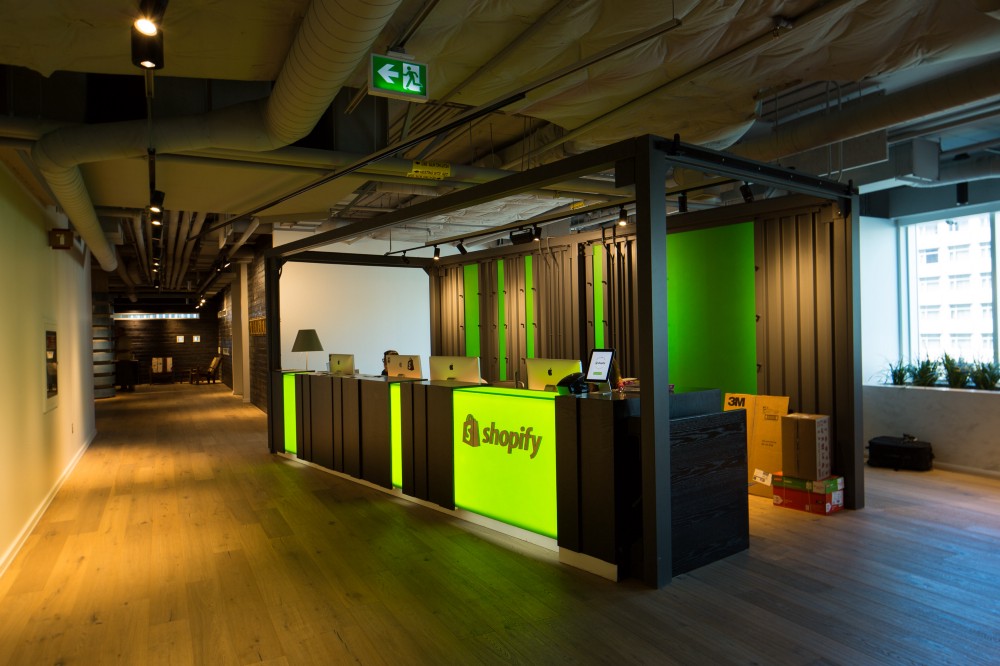 Shopify Inc doesn't have to be good, it has to be knock down drag out great for the stock to keep heading higher. Having said that, yeah, we believe it will be just that.

The company had just crushed earnings and was trading at $81.72. In the one month since that dossier, Shopify Inc is up an additional 10%.

The bullish thesis for this company is so compelling we dare not even begin to speak of it in any kind of shortened way and instead refer you to the Top Pick dossier: Shopify is the Pick-Axe to the E-commerce Gold Rush

UPDATE
In the midst of this second run after earnings, Shopify Inc actually sold more than half a billion dollars worth of stock in an equity offering to boost its cash balance. The market did not like that news at first glance, but since has decided there was good reason for the raise and the run has continued.

All can be forgiven when a company grows revenue at 84% (TTM) year over year with subscription solutions up 60% and merchant solutions revenue up 92%. But, the news that may also have turned the market back to bullish surrounds yet another business line that the company is pursuing.

First we take a step back and look at the growth in charts. We start with revenue (TTM): 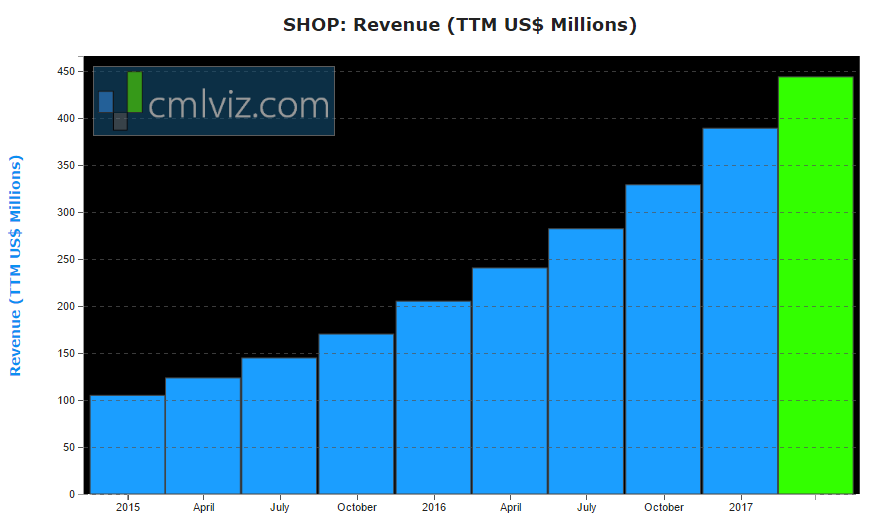 Revenue (TTM US$ Millions) for Shopify was $444 million. Last year it was $241 million, which is a 84.5% one‑year change. The company is also driving positive cash from operations: 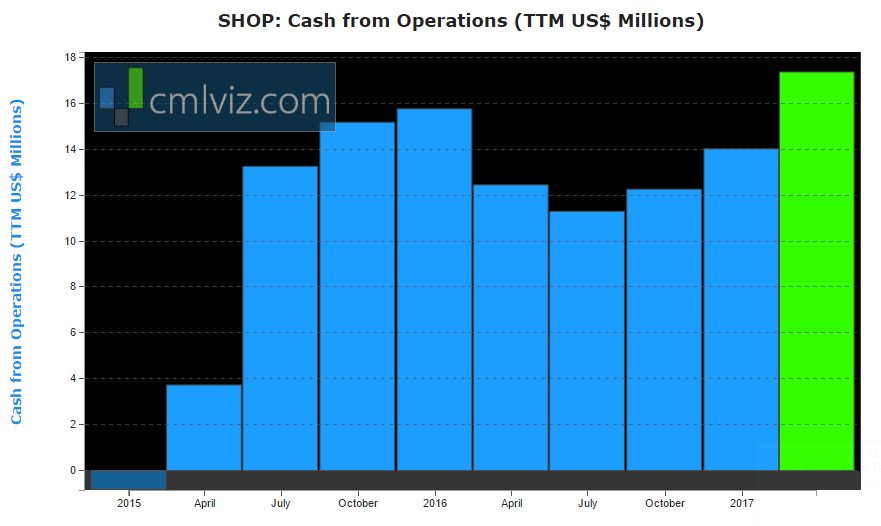 But, let's not lose sight of some other realities. The company has not turned a profit and appears nowhere near: 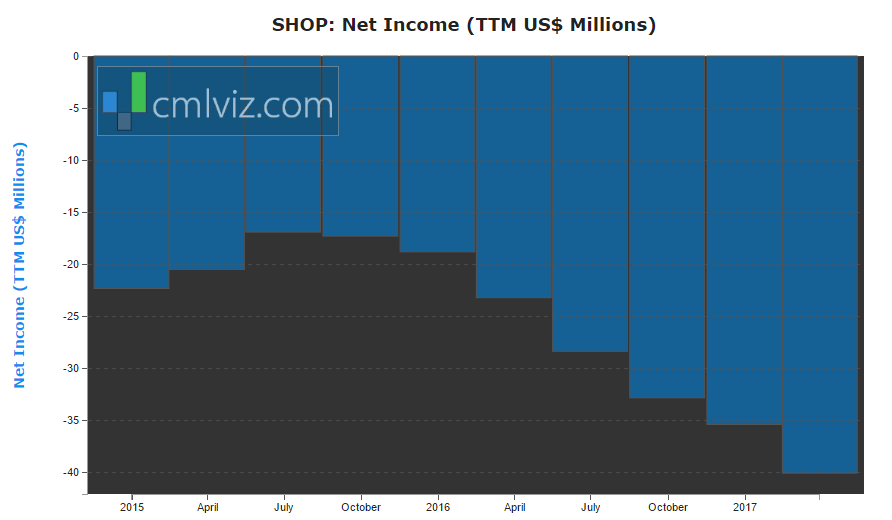 But here's the reality we are watching.

There was a point in Shopify's early days that it was a foregone conclusion that Amazon.com would simply crush the company. It turns out that the mighty Amazon is in fact not only unable to crush the new comer, but has succumb, and is now a major partner. Even further, Amazon shut down its "Webstore," which would have been the direct competitor to Shopify Inc.

The partnership with Amazon then, in a total reversal of fortunes, gave Shopify Inc a moat against its smaller peers. The history is magnificent.

Now we have more updates from Shopify Inc:

APPLE, SHOPIFY, GAMING
On May 25th of this year we learned that Shopify Inc released a new software development kit (SDK) called Unit Buy, giving game makers the ability to add support for sales of physical goods within a game.

This move comes on the back of a reality in the gaming business that e-commerce is now a legitimately new market for them to drive revenue. Here's a snippet from a nice article written by Shoshanna Delventhal for Investopedia.


Unit Buy gives players the in-game option to buy branded products related to the games they are playing-like ordering from a traditional retail store, but without the requirement of leaving the game.

It's a win-win for convenience-loving game enthusiasts and entertainment companies increasingly benefiting from a rise in recurring revenue and in-game purchases over traditional sales from new game downloads.


*The new SDK will integrate with Apple Pay and will work across mobile, console and PC platforms.

And then there's more...

CREDIT CARD READER
On April 20th we learned that Shopify Inc announced its own credit card reader. Here are the press release highlights, with analysis to follow:


And here are some the features:

* Integrated with the Shopify ecosystem.

* No charge for new and existing Shopify merchants without a Shopify POS solution; retails for only $29 USD in the Shopify Hardware Store.

So, why do we care?
This is subtle, but Shopify Inc is becoming the Alpha and Omega for small businesses which often times have to piece together various technologies to make their online and brick-and-mortar stores work. It becomes a tiresome, confusing and costly amalgamation of technologies, each of which is a point of failure, and worse yet for Shopify Inc, a potential competitor.

Now, with its first ever in-house made hardware, "any of our merchants can use Shopify to power every aspect of their business, at every interaction" (Craig Miller, Chief Product Officer).

When we combine this reader with Shopify Pay, that messy, multi-pronged process has been eliminated. "With Shopify Pay, Shopify says it has whittled down the number steps required for checkout from 16 to two. Among the merchants who've tested the feature, Shopify Pay has increased checkout speed by 40 percent" (ZDNET).

Friends, we love this move, and remind everyone how much this deepens Shopify's moat. At this point, merchants are totally beholden to Shopify when we consider the data storage, payment processing, store hosting and avenues it opens up with Amazon. It's a shrewd move and one that does make this company more valuable.

We maintain our Spotlight Top Pick on Shopify Inc, and while we note rather urgently that the market is getting toppy, in the long-run, Shopify has a long way to go, while also noting the risks of execution and competition.

The author is long shares of Shopify Inc at the time of this writing.

WHY THIS MATTERS
It's finding the technology gems, like Shopify, that can turn into the 'next Amazon,' or 'next Apple,' where we have to get ahead of the curve. This is what CML Pro does.