Shopify: Risk Alert and The Depths of Trickery

LEDE
Hello all. This is Ophir writing.

We noted in great detail the rationale and impact of short seller Andrew Left's narrative on Shopify in our recent dossier The Reason Behind Shopify's Drop.

But, we have news, now, that we must urgently convey ahead of an event.

STORY
This dossier will not go point-by-point to cover, explain, and at times refute the short narrative presented by Andrew Left -- that was the purpose of the prior dossier. Today we remind all of our members that more bad news is coming -- Andrew left told everyone so much. But we also face the possibility of chicanery from Citron research that is almost inconceivable.

MORE BAD NEWS
On October 11th, 2017, Reuters published a story Citron's Left says follow-up report on Shopify likely. The takeaway from that story is quite simple:


Short-seller Andrew Left of Citron Research said on Wednesday he was investigating various aspects of software company Shopify Inc's business and would "most likely" publish a follow-up to an Oct. 4 report that sent its shares plunging.


Left told Reuters that "I am looking at many parts of the business." Then he revealed what it is that he will be criticizing if not catastrophizing.

* He wants Shopify to disclose data on so-called customer churn, or the rate at which clients leave, a key metric to evaluate companies that sell subscription services.

As for Shopify's defense of itself, at first it was quite weak, me must say:


We vigorously defend our business model and stand resolutely behind our mission and the success of our merchants.


But that defense gained some momentum, through of all places, Twitter.

And then he followed it up with a rather appropriate message:

The totality of the response from Shopify was less than vigorous, but, the company is also in a quiet period, something Andrew left surely knows. Read this carefully -- this is one of those times where every word matters (our emphasis has been added):


In order to avoid giving analysts, journalists, certain registered investment advisors, private investors, and portfolio managers an unfair advantage that would amount to insider information, company executives are forbidden to speak to the public about the business during the four weeks prior to the close of the business quarter; a span known as "the quiet period".


That quiet period has been extended by many companies to not only include the quarter end, but the 4-weeks prior to an actual earnings announcement.

Now, follow this logic carefully. Shopify's quarter end is (was) Sep 30, 2017. The company is expected to announce earnings for that quarter on November 1st according to an estimate by Wall Street Horizon. Last year the announcement came out on 11-2-2016.

Four weeks before 11-1-2017 is 10-4-2017, and what do you know, Andrew Left dropped his bomb about Shopify on, you guessed it, 10-4-2017. So, you see, while investors want Shopify to stand up and go point-by-point to refute the accusations, their hands are tied, or, there could be a view from the general council that their hands are tied.

Just to be fully transparent, this "quiet-period" (which is different than the quiet-period before an IPO) is in fact not a law, it's a suggestion, by the SEC.

So, yes, Shopify could have, hypothetically, gone on Television and major media and point-by-point addressed the Andrew left accusations, but it's also possible that the company could not.

Now, let's read the tweet from Shopify's CEO again, with that context.

This is a little bit of tea leaf reading, but my interpretation of that tweet is simply that Shopify does feel they are in a quiet period, and the next time they can address these accusations is on the earnings call.

Whether you agree or disagree with this conclusion is up to you. You have the facts, and some of them are fuzzy -- which is to say, what and when is exactly a quiet-period?

I have spoken with many companies as an interview for Top Picks and always danced around quiet periods and have been told several times that they prefer not to speak until a date such that the SEC could not consider our discussions in bad timing. So, yes, this is a thing, it's not a little tid-bit that a crazy Google search uncovers.

The best possible view of this for that are anti-Shopify and pro-Andrew Left, is that he levied his accusations openly, bluntly and was likely ready to take on a response from the company.

The truth likely lies somewhere in between, but not the middle.

NOW WHAT?
This is when I write about a ton of objective data and make it clear what the bullish and bearish narratives are. But I've already done that in the prior dossier. So now it's just a guess, so I will give you my guess, but this time I can't hand you facts, which is what we would all prefer.

I think Andrew Left can wreck a stock. We've seen it -- he uncovered a massive fraud in Valeant and did some good for the pubic as well, bringing drug pricing to the forefront of the news and to the floor of the United States Congress.

We also know he can have zero effect -- he shorted Nvidia (oops) and MBLY with a price target of $11. MBLY was acquired by Intel for $67 (oops, again).

I don't know what's going to happen. Shopify is yet to turn a profit, but that is very much on purpose. They are growing unlike almost any other legitimate tech company and the stock is still up 100% in the last year.

Here is the revenue chart from the prior dossier: 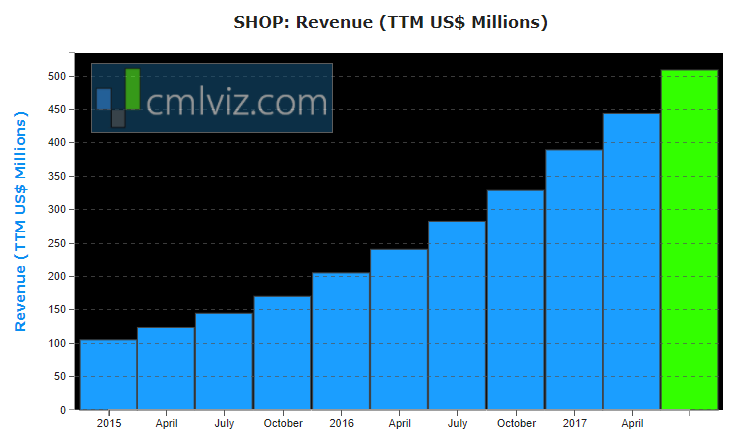 POSSIBILITIES
Thomson First Call has an average estimate of -$0.01 EPS for the quarter that ended on Sep 30th. So, the losses are shrinking. Estimates are actually for $0.02 EPS in the quarter to follow.

If, on the earnings call, Shopify raises EPS estimates, whether it be due to a direct response to Left's attacks or simply because the company is doing better than analysts have projected, the stock could absolutely rip higher.

But... and this is a big one, if the company misses estimates, and further yet takes down guidance for EPS in the next quarter to the point of a loss, even if we are talking about pennies in earnings per share, the stock could crater.

Normally, these reactions would all be rather subdued, but with the short narrative out there and the media attention to it, along with yet to come, but soon to come, new accusations, this has become the Wild West. It's dangerous, lawless, senseless, and everyone is out for blood.

So, this is the new reality we live in because of Andrew Left, and no objective data I can provide, even that thorough analysis from the prior dossier, can take that risk off.

CONCLUSION
We re-iterate our Spotlight Top Status on Shopify and much of that has to do with its enormously powerful partnerships -- Amazon, eBay, and Facebook's Instagram, but also the undeniable, even by Andrew Left, thematic trend of e-commerce. Here are our favorite two charts:

That chart comes to us from the Federal Reserve Bank of St. Louis (FRED). You're reading that right - even in the US, we're still at less than 9% of retail sales done online. eMarketer projects that number rising from 8.7% today, to 14.6% in four years.

And here are the retail e-commerce projections worldwide 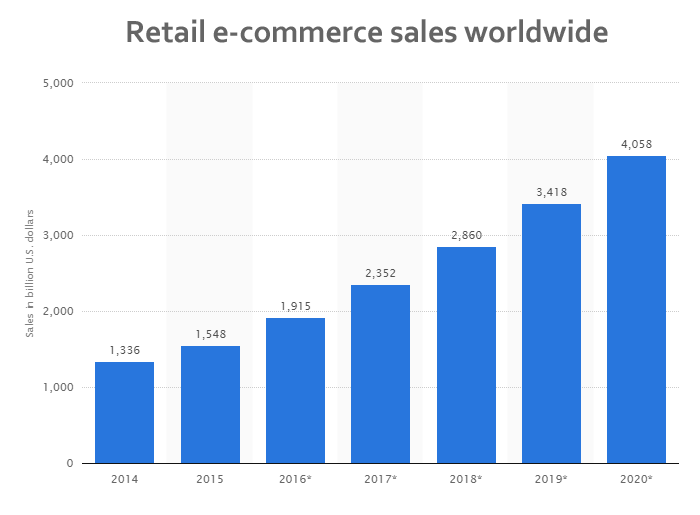 So that's it. We see those trends, and Shopify's growing moat, and remain bullish, even though that bullish call could leave us looking a stock, that in the short-term, gets decimated from an exogenous, albeit powerful, force.

SEEING THE FUTURE
It's understanding technology that gets us an edge on finding companies like Invitae early, finding the gems that can turn into the 'next Apple,' or 'next Amazon,' where we must get ahead of the curve. This is what CML Pro does.

The author is long shares Shopify at the time of this writing.