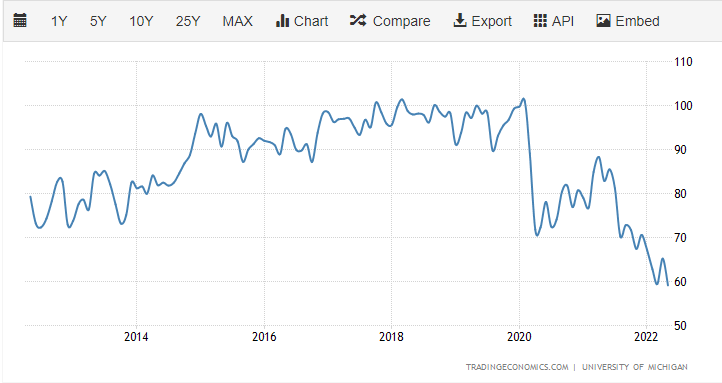 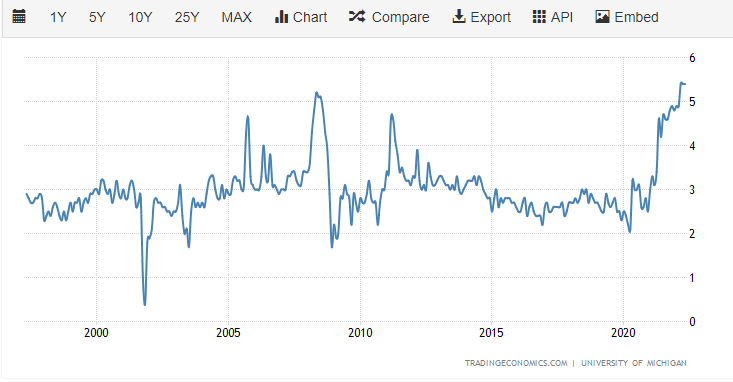 But the markets liked it... today:

• Consumer sentiment as measured by the Michigan survey fell across all major measurements and were well below estimates data shows. The 59.1 reading is the lowest in more than 10-years.

Headlines of the Day
Investors exhibit panic-like buying as stock market bounces
Stock market internals suggest investors are exhibiting panic-like buying behavior as the market indexes rally, according to the Arms Indexes of both major exchanges. The Arms is a volume-weighted breadth measure that compares the ratio of advancing stocks to declining stocks to the ratio of advancing volume to declining volume, in order to gauge the intensity of the market's move. The Arms tends to fall below 1.000 when the market rallies, and many technicians believe a decline below 0.500 implies panic-like buying of rising stocks. In afternoon trading on Friday, the NYSE Arms was at 0.410 and the Nasdaq Arms was at 0.313.

The 10-Year Treasury Yield May Have Peaked. It Makes Stocks Look Better.
What might seem like a rare piece of good news for stocks comes from the bond market. The soaring yield on 10-year Treasury debt looks as if it may have hit its high point, or be close to it. If that is true, both growth stocks and dividend-paying names would benefit.

Beef prices climbed 24% in second quarter, with chicken up 14%
Rising prices for livestock, animal feed, freight and labor have raised costs for the owner of Hillshire Farms and Ball Park hot dogs, which it has thus far been able to pass along to customers.

Economic Data Results for 5-13-2022
United States Michigan Consumer Sentiment
The University of Michigan consumer sentiment for the US fell to 59.1 in May of 2022, the lowest since August of 2011, from 65.2 in April and below market forecasts of 64, as Americans remained concerned over the inflation.

United States Import Prices
Import prices in the US were flat in April, following an upwardly revised 2.9% jump in March and lower than market forecasts of a 0.6% rise. It is the first time so far this year that import prices have not risen.

Get The CML Close - End of Day Market Wrap

The Company makes no representations or warranties about the accuracy or completeness of the information contained on this website. Any links provided to other server sites are offered as a matter of convenience and in no way are meant to imply that The Company endorses, sponsors, promotes or is affiliated with the owners of or participants in those sites, or endorse any information contained on those sites, unless expressly stated."