The Fed's preferred inflation measure (PCE) dropped to 6.3% annually, down from 6.6% in the prior report, while the monthly change of +0.2% was the smallest rise in one and a half years.

Bettering the mood, the core PCE inflation index (PCE ex-food and energy) dropped to 4.9% from 5.2% last month and 5.3% from two months ago marking a back-to-back annual rollover.

Consumer sentiment, on the other hand, hit its lowest level in more than decade.

• PCE and Core PCE are down. Was this a mirage or the start of a trend? 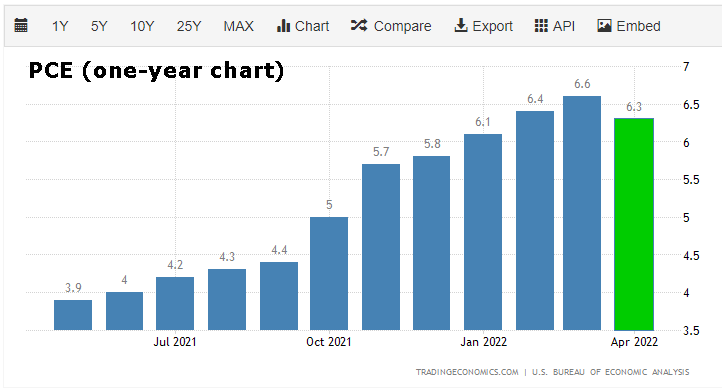 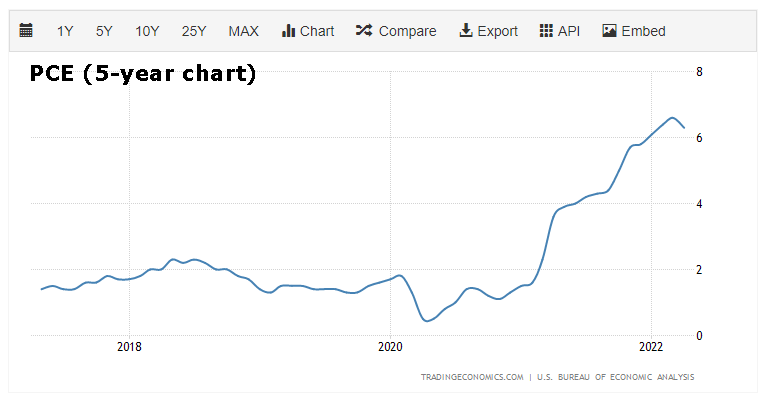 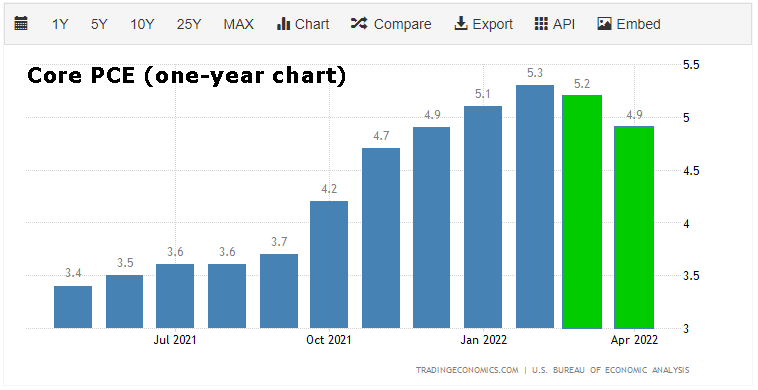 • Consumer sentiment is as bad as it has been since 2011. 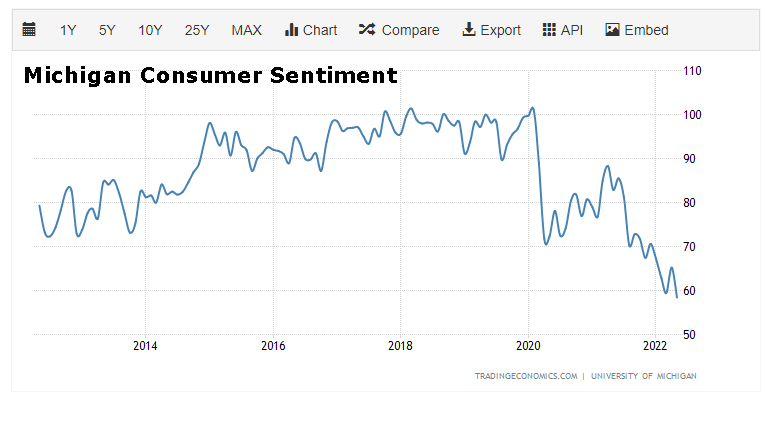 Headlines
Stocks close sharply higher after inflation data; Dow snaps longest weekly losing streak since 1932
U.S. stocks ended sharply higher Friday, with all three major benchmarks booking weekly gains, after the Federal Reserve’s preferred measure of inflation for April had the smallest increase in a year and a half.

Did US Consumer Spending Just Hit Its Peak?
The divergence between spending and saving suggests we may be witnessing “the last hurrah” in the strong consumer narrative. It’s not hard to imagine consumers, watching their savings being whittled down at the same time that stock and bond markets are delivering heavy losses, deciding it’s time to take a break from shopping for a while.

US Wage Increases Show Signs of Peaking in Welcome Sign for Fed
Slower pay growth may help the central bank rein in inflation. Smaller firms are reaching limits of how much they’ll pay out.

US Growth Seen Outpacing China’s for First Time Since 1976
Bloomberg Economics sees China slowing to 2% on Covid curbs. Such a growth rate would be weakest since Cultural Revolution.

Gas Prices Are Surging, Demand Is Slipping Ahead of Memorial Day Weekend
Demand for gasoline in mid-May fell to one of its lowest levels for this time of year in nearly a decade, according to government data. The drop is an early indicator that rising gas prices are prompting some Americans to change their driving habits ahead of Memorial Day weekend and what is typically the peak summer driving season.

Economic Data Results for 5-27-2022
PCE Price Index
The personal consumption expenditure price index in the United States increased 6.3% year-on-year in April of 2022, after reaching a record high of 6.6% in March.

United States Michigan Consumer Sentiment
The University of Michigan consumer sentiment for the US was revised down to 58.4 in May of 2022, the lowest since August 2011, from a preliminary reading of 59.1. Consumers continued to have negative views on current buying conditions for houses and durables, as well as the future outlook for the economy, primarily due to concerns over inflation.

United States Personal Spending
Personal spending in the US increased 0.9% month-over-month in April of 2022, following an upwardly revised 1.4% rise in March and beating market forecasts of 0.7%, in a sign consumption remains robust despite rising prices.

The Company makes no representations or warranties about the accuracy or completeness of the information contained on this website. Any links provided to other server sites are offered as a matter of convenience and in no way are meant to imply that The Company endorses, sponsors, promotes or is affiliated with the owners of or participants in those sites, or endorse any information contained on those sites, unless expressly stated."