What Really Happened on the Tesla Earnings Call

BREAKING
Tesla reported earnings yesterday after the close and CEO Elon Musk announced some news that was nothing short of shocking, if not incredulous.


THE NUMBERS
Before we get into the real story, here is a quick top line review:

Further, while just about every analyst I read warned of slowing growth in the current Model S, we learned this:


“
Q1 Model S net orders rose 45% compared to a year ago, and grew at a faster pace than last quarter.

Now, on to the bigger news:

THE REAL NEWS
The much bigger news came from Elon Musk's guidance. While he has long stood by what many have considered an absurd goal of selling 500,000 cars by 2020, he changed his mind. Now he has given guidance that 500,000 cars will be delivered two-years earlier, by 2018. He said that by the year 2020 deliveries will be "something like a million."


“
Tesla is going to be hell bent on becoming the best manufacturer on Earth.

That was startling news, to say the least. At first blush, the stock spiked in the after-hours trade, then it started falling. Here's what happened:

REALITY CHECK
Before the announcement of ramped up production, Tesla had a stated goal of reaching both profitability and positive cash flow by year end. With this new goal, those two metrics will be missed. In fact, before the bold new statement, analysts were already forecasting full-year cash burn of about $820 million (Bloomberg). If we factor in new capital expenditure guidance that provided on the earnings call -- which Tesla is still "re-evaluating" -- that cash burden widens to almost $1.6 billion.

Here is a chart of Tesla's debt, with the latest quarter included: 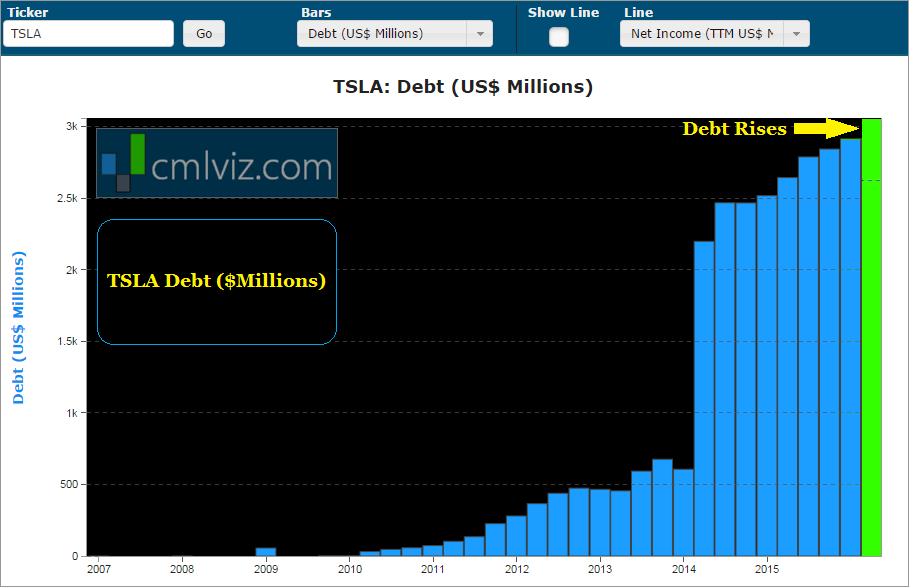 We do note that Tesla does have $1.44 billion in cash and equivalents per the latest 8-K filing and $318 million in accounts receivable. ElonMusk also said:


“
Increasing production five fold over the next two years will be challenging and will likely require some additional capital, but this is our goal and we will be working hard to achieve it.

The bulls saw Musk's vision as incredibly positive and there have been a number of upgrades. The bears see it as an "impossible" goal and just yet another reason for Tesla to raise capital. Actually, both camps are wrong -- here's what really happened:

REASON NOT INSANITY
Just like everyone else, Elon Musk was also blown away by the initial demand for the Model 3 -- which now stands at over 325,000 pre-orders which the firm estimates at $14 billion in future sales. Whether you like Tesla or not, whether you think it's a revolutionary new company or a cash losing machine, one thing that is simply inarguable, the best reason ever for a company to raise capital is to satisfy existing orders.

That friends, is a fact.

MORE
While the main stream media simply repeats everything analysts say, which means the media will repeat ad nauseum that Tesla has missed every production goal it has set, what the media will not do is use critical thinking.

Remember, Elon Musk is not speaking to Wall Street when he sets goals. When he says that the Model 3 will start manufacturing as of July 2017, he is pushing his team to meet the goal. The Model 3 will not be delivered by July 2017, but it will likely be built by October. A Wall Street driven CEO would have simply "guided" for a December 2017 manufacturing date and hoped to "surprise" to the upside while likely not.

HOW DO YOU KNOW?
OK, so now we sound like we're super smart and everyone else is stupid. So, the next question is, "how do we know that's what Elon Musk is doing?" Here's how:

Prior to yesterday's announcement, even the great bullish analysts felt that 500,000 vehicle deliveries by 2020 was likely a wing and a prayer, and if the firm even hit 70% of its goal (350,000 deliveries) that it supported a much higher stock price. Analysts do this to give themselves wiggle room if they are wrong.

OPPORTUNITY
The dip in Tesla shares was expected -- all CML Pro members were told to get ready for a dip to buy shares. The dip has happened.

WHY THIS MATTERS
Research must go further than the headlines into the trends that will shape the next decade. Tesla is just one of CML Pro's precious few 'Top Picks.' But, to find the 'next Tesla' or further the 'next Apple,' we have to get ahead of the curve. This is what CML Pro does. Our research sits side-by-side with Goldman Sachs, Morgan Stanley and the rest on professional terminals, but we are the anti-institution and break the information advantage the top .1% have.