PREFACE
Twitter has been going through a mass transformation -- and while some changes still feel like standard tech company changes -- one move that nobody is talking about, may be the most brilliant and effective attack on Facebook, yet.

Twitter's management finally gets it -- and this stock could rise substantially.

SHAKE UP
Before we get the most recent development, let's get through the mass changes Twitter has affected recently.

First, we saw an enormous internal shake up just a month ago. Four of Twitter's top 10 management jumped ship in a single day. 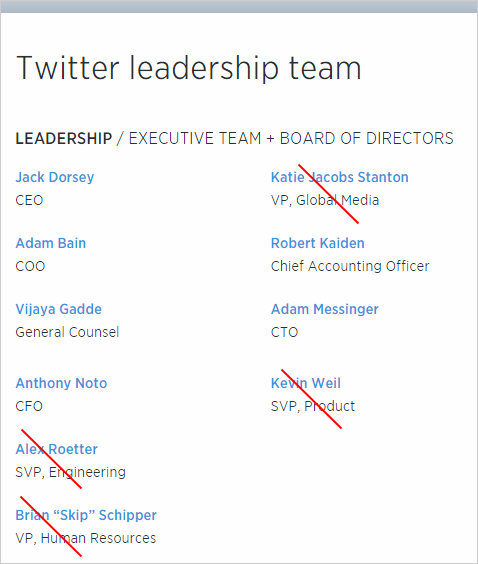 I. PROGRESS: STREAMING VIDEO AND GOPRO
With a $12 billion market cap, down from $35 billion, and $2.2 billion in revenue growing still at 58% (TTM), Twitter's valuation has reached the point of market madness. This contradictory state exists because the market has zero belief in Twitter's leadership and path. Changes were needed desperately, and changes have arrived.

On January 25th we learned that Twitter and GoPro would be partnering through Twitter's wholly owned live streaming service, Periscope. This is a change for GoPro, which until now had focused on the competing service Meerkat.

With what has been named, "GoLIVE," GoPro and Periscope/Twitter users can engage in real-time. GoPro's website reads:

This is quite clever, but it isn't the brilliant move that changes everything.

Twitter recently struck a partnership deal with India-based chat app – Lookup. Users in the country can now tweet on @lookuplite to get information and also make purchases (and book appointments) from a range of retail services.
Source: ZACKS

We're talking about payments and transactions, but there's more. Twitter is also providing free delivery during the holiday season. As of this writing, the service has been rolled out to Delhi, Bangalore, Mumbai and Pune.

India represents the third-largest Internet user base after China and the U.S. It's easily Facebook's second largest market at 125 million users. Here is the incredible growth in social media users in the country (Statista): 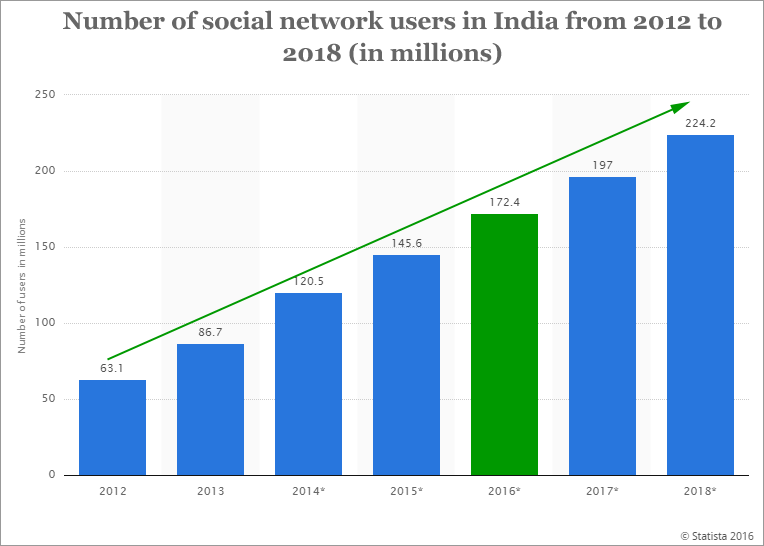 This is enormous, but it isn't the brilliant move that changes everything.

Twitter announced Thursday that it will start showing ads to its "logged out" audience, a group of roughly 500 million people who visit Twitter every month but who don't have active user accounts.

Twitter has long been telling us that the 320 million monthly average user (MAU) number is vastly understating its user appeal. And by vastly, we mean, the number looks more like 800 million users.

As of December 10th we now know that Twitter is going to start monetizing this base. Here's the all-time revenue chart, which still looks magnificent and does not include the new strategy. 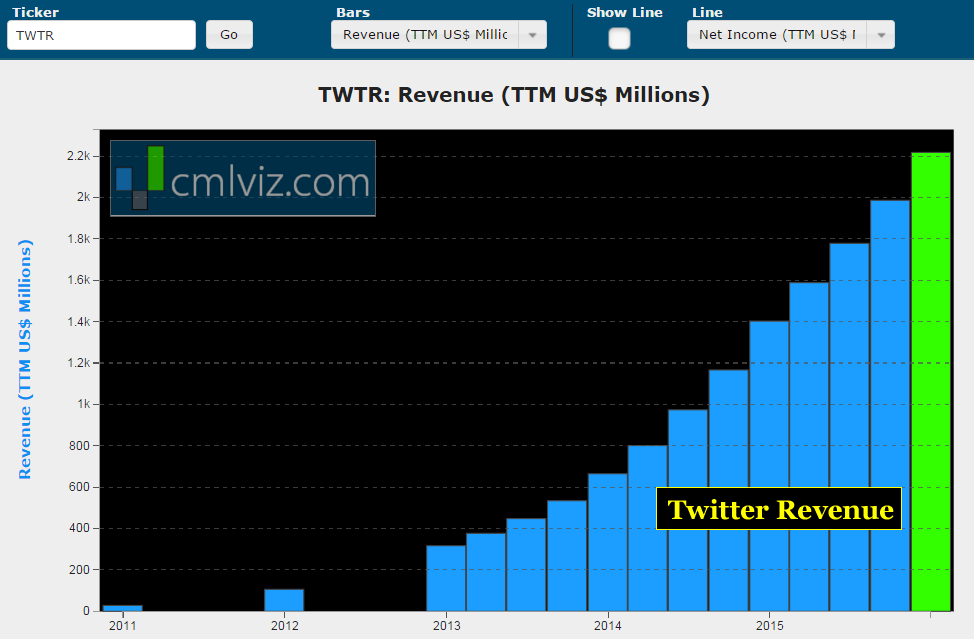 Note that while user growth has all but stopped, the monetization of its user base is exploding.

On Twitter's last earnings call, COO and head of revenue, Adam Bain, said that the company believes these ads will monetize at about half the rate of usual Twitter ads (Source: re/code).

Those 500 million more logged out users would mean an additional $1.5 billion in revenue or 75% more revenue with essentially no additional development for the product needed.

This too is genius, but it isn't the brilliant move that changes everything.

IV. PROGRESS: LIVE STREAMING VIDEO
In January Periscope was made available to stream inside Twitter feeds, as opposed to a link. Periscope already boasts 10 million active users and hosted more than 100 million active broadcasts. Video streaming and video ads are the fastest growing segment in advertising.

Online video advertising spending in the United States will hit $9.1 billion in 2016, up from $4.4 billion just two years ago. This is the battlefield and could breathe yet another massive revenue flow into Twitter. Right now facebook (FB) and Alphabet / Google (GOOG, GOOGL) are dominating. Now it's time for Twitter to make some room for itself.

This is also a fantastic move in the right direction, but it isn't the brilliant move that changes everything.

V. PROGRESS: THE BIG CHANGE
It's the smallest things, sometimes, that signal a change in thought process -- a change in understanding and approach -- it's one of these small things that just happened, and it means Twitter's management has finally turned off the over intellectualizing of its social media property it thinks peole need and turned to what poeple want.

Facebook has 1.55 billion MAUs. WhatsApp has 1 billion MAUS. Facebook Messengerhas 800 million MAUs. Instagram has 400 million MAUs. Each of these are owned by Facebook and each tower above Twitter. Apple (AAPL) has filed a registration with the United States Patent and Trademark office for new social media network -- vaguely named social groups.

The brilliance behind Facebook and (soon Apple), said in a very simplified way, is its ability to give people what they want. Facebook won't affect the Arab Spring or the political vernacular, but it will let people watch cat videos, share fun memes and generally be social in a digital environment.

Twitter has not done that. It's quippy, intellectual, and up until now, has felt "too good" for memes, cat videos and generally, "fun." 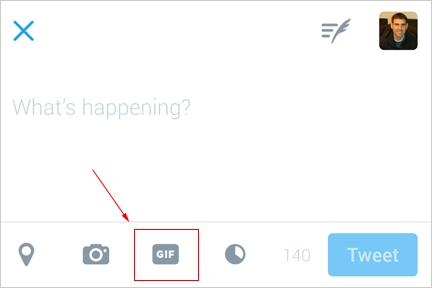 We have highighted the new .gif button library. These are images that play like movies, but require no special player. Here are some of the more popular ones on the web:

The best high-five in history

Now if you're starting to roll your eyes, hold on one second and read this comment from Facebook, when it allowed animated gifs to appear:

We built support for animated GIFs to help people express themselves in fun new ways on Facebook.

Animated .gifs are now dominating social media because they increase engagement. Increased engagement means more users, more time on the platform by users and more social interactions between users. All three of those descriptions are weaknesses for Twitter and all three translate into revenue from ad sales.

Further, some people claim that GIFs are the future of photojournalism (About Tech).

WHY THIS IS HUGE
The animated .gif library Twitter offers is not a game changer in and of itself. But it is a radical first time move that shows Twitter has addressed the difference between what people need and what people want.

For Twitter to grow it must go further than its overly intellectualized, pedantic and at times confusing interface and general attitude toward Facebook, Instagram, Snapchat, etc. Those firms are exploding in growth -- Twitter is shrinking. These are the facts and they are not disputed.

Twitter finally gets it, and if the company can make its spectacular intellectual social media company into one that is also welcoming, fun and engaging, well that deserves a .gif:

But, while most people are trying to find the 'next Twitter,' or the 'next Apple' we have to get ahead of the curve. This is what CML Pro does. Our research sits side-by-side with Goldman Sachs, Morgan Stanley and the rest on professional terminals, but we are the anti-institution and break the information advantage the top 1% have.