Seven Facts About Twitter that Have Been Purposefully Overlooked

PREFACE
So by now we should all know that Twitter announced a bit of a stunner when it beat out Amazon, Verizon, Facebook, Google, Yahoo!, Apple and a host of other companies to stream the NFL's nationally broadcast Thursday night football games. But facts have been either overlooked or purposefully misrepresented and it's time for the truth.

STORY
First, an article came out about Facebook's diving engagement rates in a story entitled "The worst thing that could happen to Facebook is already happening." Here's the quick recap in one quote

In the past few months, Facebook has quietly shifted into crisis mode.

[P]osts consisting of users' own words and images--fell 21 percent from 2014 to 2015, contributing to a 5.5 percent decrease in total sharing.


At the exact same time, Twitter is turning everything around and collaborating with Alphabet's Google (NASDAQ:GOOG) driving billions of impresssions on tweets a day. And then, the NFL happened:

While Wall Street has focused on Twitter's 320 million average users (MAUs), the company has time and again pointed to its additional 500 million MAUs that are not logged in. The NFL games will be made available to this non-logged audience as well.

Twitter's CFO, Anthony Noto, the former CFO of the NFL, said that Twitter and the NFL together was "a great, great product for logged-out users." The company is making strides to come out from under the underdog label and it's trying to be the next technology giant. In fact, an article from Social Media Today, reads:

While Facebook's pushing hard to promote their own live-stream offering, and YouTube's reportedly set to introduce their own, dedicated live-streaming app, don't think Twitter and Periscope are going to concede to the bigger players anytime soon."

Now, here we go with the real battlefield and we fight through the drudgery that is misinformation.

First: Since Periscope's launch last March, more than 110 years of live video has been watched via Twitter's live streaming video app everyday. But, as of August 12th, 2015 that number was just 40 years. So, we see nearly a triple. This data comes straight from Periscope on their medium channel.

Second: Since Periscope was enabled within Twitter users' timelines, it has reached more than 200 million live broadcasts. That's more than double the number of broadcasts Twitter announced just three months ago -- when it started the launch within user timelines. This data, too, comes straight from Periscope.

Third: Twitter also revealed that the number of direct messages grew over 60% in 2015 and yet more, the number of Tweets shared privately has grown by 200% in just the second half of last year. This information comes straight from Twitter's blog.

Fourth: "Twitter says that it has seen across-the-board increases in likes per-user favorites, retweets, replies, tweets and daily usage following the new timeline's debut." This comes straight from Twitter itself, this time via TechCrunch.

Fifth: Twitter was selected by the NFL to carry the live national broadcasts and submitted lower bids that the other large firms in the fray. This data was given to us straight from the NFL.

You see, these are the facts and they are not disputed. It's amazing what we can find when we stick with facts. And yes, there are facts that show slowing user growth. In fact, here it is, from our friends at Statista: 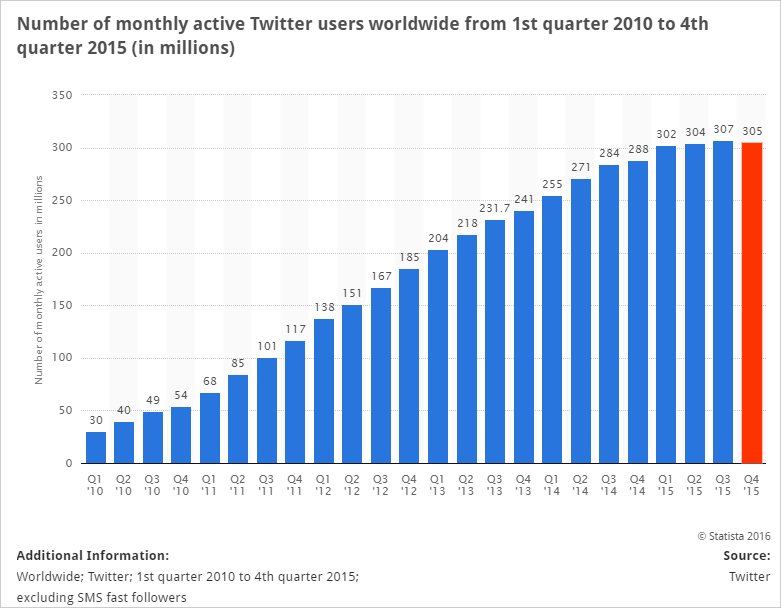 You see, facts. And since we're on the subject of facts...

MIS-INFORMATION
It was reported that one analyst said Twitter may have outbid other networks for the rights at a price tag of $100 million. Then this information came out:

We got word from the NFL's executive vice president of media, Brian Rolapp, that the NFL package didn't go to the highest bidder. Here's snippet from an article published by Social Media Today (emphasis added):

"We didn't take the highest bidder on the table," The NFL's executive vice president of media, Brian Rolapp, told Bloomberg.

R/e code reported "people familiar with the bidding said Twitter paid less than $10 million for the entire 10-game package, while rival bids topped $15 million." The implication that Twitter paid $100 million, as of right now, seems absurd and colored by a subjective bearish tone.

Of course there were more bearish takes. Morgan Stanley lowered its price target.

SEEING THE FUTURE
Apple, with its new social network patent filing, will soon battle for MAU, but no firm has Twitter's advantage -there is one king of real-time communiqués. But what we're really talking about here is the obfuscation of information. Our purpose is to provide institutional research to all investors and break the information monopoly held by the top .1%.

Now, to really understand why Twitter will finally be a winner, and then to go further, to find yet again the 'next Amazon' or the 'next Apple,' we have to get ahead of the curve -- with facts. This is what CML Pro does. Our research sits side-by-side with Goldman Sachs, Morgan Stanley and the rest on professional terminals, but we are the anti-institution and break the information advantage the top .1% have.