Preface
While the market is beside itself over rumors that potential bidders for Twitter have dropped off like flies, the actual news surrounding the company has been, objectively, quite good.

It's no longer speculation, it's objective: Twitter Inc. (NYSE:TWTR) is growing, it signed its largest video deal ever, and it is driving higher ROI to brands.

While Disney (DIS) and Verizon are rumored to be out of the bidding process and Alphabet (GOOGL) is out as well (likely a tactic but let's play along), the world seems to have forgotten that the bidding process is for a company not a stock, and that company is showing renewed strength.

As an aside, Verizon's sudden decision to rake $1 billion from its Yahoo! (YHOO) bid may be the early stages of a flip -- perhaps Twitter is the content engine VZ is after.

NFL
We'll start nice and easy. Twitter Inc. saw 2.1 million viewers at its peak for the first NFL game it simulcast. The week after it hit 2.3 million. Yesterday, we just learned from Twitter's VP of Data Strategy, Chris Moody, that yesterday's game saw 3.1 million viewers. here is his tweet:

Exciting to see how many people are tuning in for the @NFL on @twitter. Up 32% from the first game with 3.1M viewers last night. #tnf


And we can put the Twitter Inc. game by game viewership in to nice little bar chart: 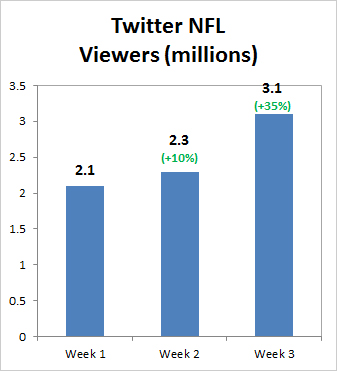 That's just under 10% growth week one to week two, and then 35% more growth week 2 to week 3. We note that the Twitter Inc. platform skipped one week which the firm did not have a license for. We also note that the 2.1 million number for week one is based on numbers during the game, not including pre-game.

But that's not even the tip of the iceberg.

ROI
Before we get to yet more growth, the kind that reads "revenue," we get more from Twitter Inc. (NYSE:TWTR).

In an official Twitter blog post that went wildly under reported, we found out that Twitter is winning in the ROI game. Check out some of these statistics that the company released based on research done in partnership with Applied Marketing Science:

"
When a customer Tweets at a business and receives a response, they are willing to spend 3-20% more on an average priced item from that business in the future.
"

The two companies did an analysis by vertical to include airlines, US quick service restaurant (QSR) and telecom industries. Here are the results:

Just to make these numbers perfectly clear, the research suggests, with all the bells and whistles removed, that when a company communicates with a customer on Twitter, the company makes more money.

But the Twitter Inc. blog post goes further to show that not only does revenue rise, but "customers who receive service via Twitter will create measurable upper-funnel impact." Here's another image, then the translation into English:

And for all the naysayers that will point to the risk of negative pubic tweets, Twitter Inc. (NYSE:TWTR) has a response to that as well.

That chart is for telecomm companies and it reads that "conversations that started with a negative Tweet resulted in higher brand favorability as well as 3X higher willingness to pay for their monthly wireless plan, compared to those whose original Tweet was positive." Yes, negative tweets are better likely because problems are seen as resolved quickly.

Finally, for the skeptic, Twitter Inc. shows another powerful result:

This chart demonstrates that between phone, web, email, in person and Twitter based customer service, Twitter is by far the least frustrating facility.

Oh, right, we wanted to talk about more revenue didn't we?

BIGGEST DEAL EVER
Reaching back a few days, we reprise a story we penned surrounding Twitter's recent video deal which is its largest ever through Amplify.

"
Twitter Inc. has had several deals through its Amplify video ad product, but according to Mike Park, the director of content partnerships and Amplify, Twitter has never signed a deal of this size before.

Takeover rumors aside, Twitter Inc. is showing measureable progress, ROI and large revenue deals. These are the facts, and they should not be disputed.

The author is long shares in Twitter Inc. (NYSE:TWTR).

WHY THIS MATTERS
Our research sits side-by-side with Goldman Sachs, Morgan Stanley and the rest on professional terminals. Of our Top Picks, Nvidia is up 110% since we added it. Ambarella is up 112% since we added it. Relypsa was taken over for a 60% gain and we are already up on Twitter when we added it to Top Picks for $15.60.