STORY
Twitter Inc. (NYSE:TWTR) is a CML Pro Spotlight Top Pick and news has started to flow from the company that is quite positive. Here are some updates:

Here are the facts: 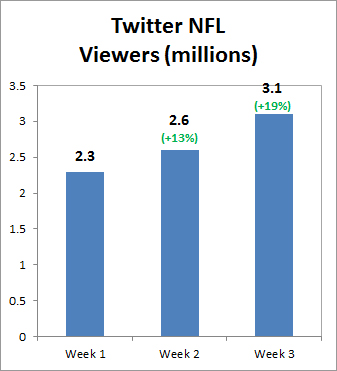 For those with a careful eye, you will note that the numbers are changing a little bit every time we post this chart. All I can say is that the data seems to move around a little, and I'll just assume it's different ways of computing the numbers. In any case, the growth is there and further it is in the face of shrinkage from linear TV.

Second, this exact same phenomenon is happening for Twitter with respect to the presidential debates. 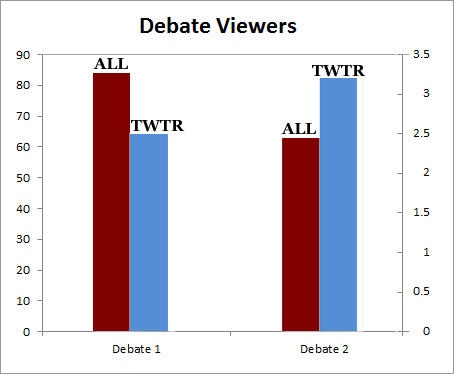 Twitter Inc. (NYSE:TWTR) viewership is up 28% while total viewership (mostly TV) is down 33%

"Ad inventory for all [] debates has sold out, and Twitter's livestream of the presidential debates is over-delivering on advertiser expectations.

Twitter's mid-roll ads in the pre and post-debate shows over-delivered on impression estimates by 377% with still one debate to go."

I have no idea what Kara Swisher and the rest of Wall Street are looking at, but the current time, using these metrics, Twitter is not only growing, it's growing in the face of shrinkage everywhere else.

Revenue Impact
The real question is whether or not this will impact revenue, and we really don't know. We do know that about 15% of the NFL viewers are coming from "logged out" users, which is the evidence the world needed to justify Twitter's claim that its reach goes well beyond its reported 313 million monthly active users (MAUs) but also into the large pool of 500 million additional MAUs that are logged out.

We also know this fact that just came out from the firm:

Largest Amplify Deal Ever
Reaching back a few days, we reprise a story we penned surrounding Twitter's recent video deal which is its largest ever through Amplify.


" Twitter Inc. (NYSE:TWTR) has had several deals through its Amplify video ad product, but according to Mike Park, the director of content partnerships and Amplify, Twitter has never signed a deal of this size before.


We also know that ROI is booming for brands that use Twitter Inc. (NYSE:TWTR). From that same CML Pro dossier we get this:

ROI
In an official Twitter blog post that went wildly under reported, we found out that Twitter is winning in the ROI game. Check out some of these statistics that the company released based on research done in partnership with Applied Marketing Science:
" When a customer Tweets at a business and receives a response, they are willing to spend 3–20% more on an average priced item from that business in the future.
"


The two companies did an analysis by vertical to include airlines, US quick service restaurant (QSR) and telecom industries. Here are the results:

Just to make these numbers perfectly clear, the research suggests, with all the bells and whistles removed, that when a company communicates with a customer on Twitter, the company makes more money.

But the Twitter Inc. blog post goes further to show that not only does revenue rise, but "customers who receive service via Twitter will create measurable upper-funnel impact." Here's another image, then the translation into English:

And for all the naysayers that will point to the risk of negative pubic tweets, Twitter Inc. (NYSE:TWTR) has a response to that as well.

That chart is for telecomm companies and it reads that "conversations that started with a negative Tweet resulted in higher brand favorability as well as 3X higher willingness to pay for their monthly wireless plan, compared to those whose original Tweet was positive." Yes, negative tweets are better likely because problems are seen as resolved quickly.

Finally, for the skeptic, Twitter Inc. shows another powerful result:

This chart demonstrates that between phone, web, email, in person and Twitter based customer service, Twitter is by far the least frustrating facility.

Twitter Inc. (NYSE:TWTR) Conclusion
Twitter Inc. is very quiet about guiding intra-quarter for revenue and EPS -- that's just their thing. But, they do provide data and press releases like those above. We can't say if revenue will meet or beat expectations, nor can we say anything about EPS. But, we can say that:

Second, We can also see a video advertising deal larger than any other of its kind.

Third, ad inventory for all [] debates has sold out, and Twitter's livestream of the presidential debates is over-delivering on advertiser expectations.

Fourth, ROI for brands using Twitter for customer engagement is high as is customer upper-funnel impact.

That's good enough for me to believe the turnaround is working.

WHY THIS MATTERS
Our research sits side-by-side with Goldman Sachs, Morgan Stanley and the rest on professional terminals. Of our Top Picks, Nvidia is up 100% since we added it. Ambarella is up 90% since we added it. Relypsa was taken over for a 60% gain and we are already up on Twitter when we added it to Top Picks for $15.60.

To become a CML Pro member it's just $25 a month with no contract. It's that easy -- you cancel at any time, instantly. But you won't cancel -- you'll have a blast.

Each company in our 'Top Picks' portfolio is the single winner in an exploding thematic shift like genomics, self-driving cars, artificial intelligence, Internet of Things, drones, biotech and more. For a limited time we are offering CML Pro at a 75% discount for $25/mo. with a lifetime guaranteed rate. Get the most advanced premium research along with access to visual tools and data that until now has only been made available to the top 1%.