Preface
Twitter Inc (NYSE:TWTR) monthly active user (MAUS) growth has returned, and it may be accelerating due to the revolution that is online video.

STORY
Twitter Inc has faced a horrendous spell of slowed growth in monthly active users and, in turn, revenue. The company's stock price is down 48% over the last two-years and 23% over the last year. But, the turnaround narrative is catching some bids, seeing the stock rise nearly 25% over the last six-months. Here's the evidence of growth recently, and the argument that growth will accelerate moving forward.

First, we can look at a chart that plots worldwide MAU counts for Twitter Inc (NYSE:TWTR) through time, from our friends at Statista: 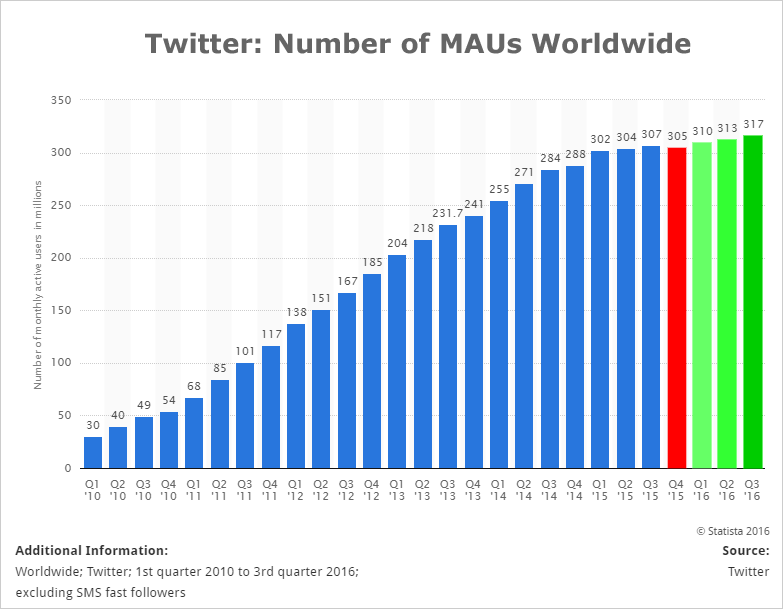 The panic set in when Twitter showed an user shrinkage in the final quarter of 2015, which we highlighted in red. But, since that report, we can see a slow but steady climb from 305 million MAUs to now 317 million MAUs, with each of the last three quarters representing all-time highs for the company. That growth however is rather anemic, never exceeding 2% in any quarter-over-quarter measure. Here is the impact that slowed growth has had on revenue: 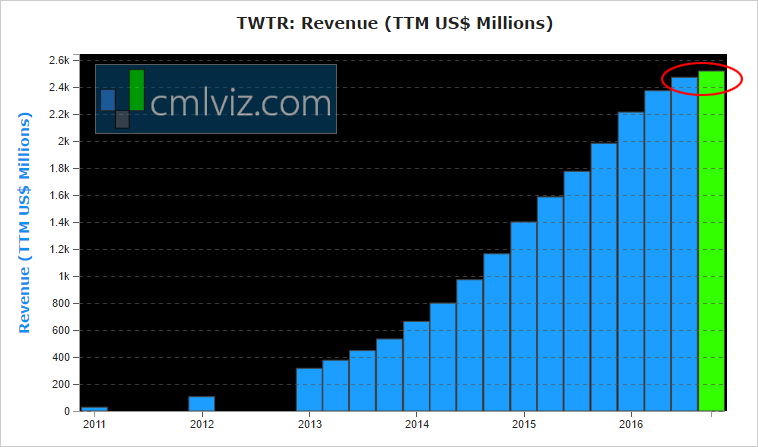 While revenue in the trailing-twelve-months for Twitter Inc has reached an all-time high at just above $2.5 billion, there is a legitimate risk that once the fourth quarter numbers are announced, that the trend that has persisted throughout Twitter's history will come to an end.

In the accompanying CML Pro dossier, we magnify this slowed growth with a critical chart.

The slowed growth has meant other challenges, not the least of which was the exit of Adam Bain, the head of revenue and Chief Operating Officer, as well as six new heads of product in less than five years. But, we have long believed, based on data, that Twitter Inc (NYSE:TWTR) is in fact in the midst of a successful turnaround.

TURNAROUND
There are far too many details to specify in this dossier, but broadly speaking Twitter Inc has turned itself into a #GoLive platform -- focusing on live streaming video from politics to finance and most famously, sports. The digital video advertising world is exploding. Generally speaking, estimates have come out that 80% of the content we consume online by the year 2020 will be video.

In the accompanying CML Pro dossier we detail this shift with a series of charts that show, with great specificity, the revolution that is online video and its consumption patterns over time.

Now, two reports have been published recently that point to Twitter Inc seeing yet more growth. We'll start with a rather tame note from Canaccord Genuity's Michael Graham (emphasis added).

"
Based on data so far this quarter (and extrapolating out to quarter-end) our TWTR engagement survey looks like it will grow 5.3% sequentially in Q4 over Q3.


Included in that note was a call for a 5.3% growth in engagement. But, James Cakmak or Monness Crespi Hardt came out today with a more bullish view:

Theoretically, the company could virtually double the ~320MM users it has on the platform by the end of next year, assuming churn is in check via enhancements being made to the timeline, notifications, and tweeting.
Source: BARRON'S
"


While the call is for substantial user growth for Twitter Inc (NYSE:TWTR), the analysis did temper revenue growth forecasts, essentially stating that it will take some time, even with a growing user base, for Twitter to prove its mettle to large advertisers that have forsaken the platform for Facebook and Google. The optimism for revenue started in the second half of 2017.

SO WHAT'S GOING ON?
The bottom line is that Twitter Inc made a huge bet to move toward live streaming video and it appears that the bet is working.

Just today Twitter Inc announced that Periscope was now fully integrated into the product, making live streaming video as easy as possible, much like Facebook has done with Facebook Live. CML Pro added twitter to Top Picks for $15.60 and we maintain our belief that the stock has upside in the long-term.

The author is long shares of Twitter Inc (NYSE:TWTR).

WHY THIS MATTERS
If you enjoyed learning about Twitter with facts and historical perspective, this may be up your alley: Our research sits side-by-side with Goldman Sachs, Morgan Stanley and the rest on professional terminals. Of our Top Picks, Nvidia is up 180% since we added it. Ambarella is up 60% since we added it. Relypsa was taken over for a 60% gain and we are already up on Twitter when we added it to Top Picks for $15.60.