STORY
On a rather calm Valentine's day afternoon, Jack Dorsey sent out this tweet:

And that tweet led to an SEC filing where it shows Jack buying over 425,000 shares of Twitter Inc stock in the last two days. Here is the SEC filing: 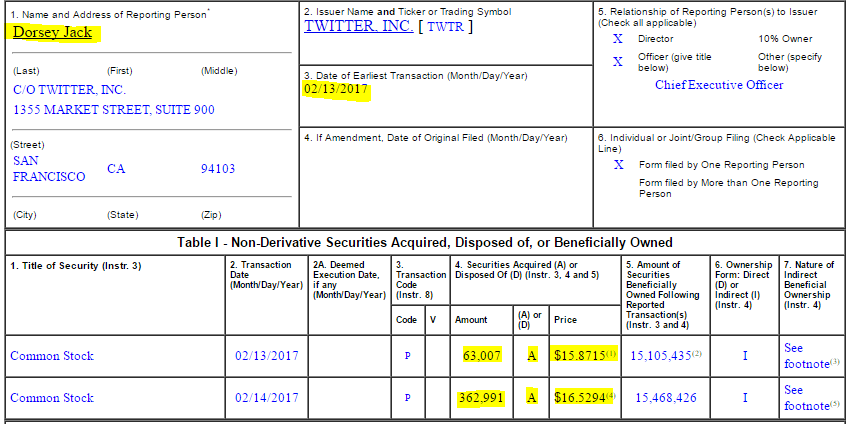 Twitter Inc (NYSE:TWTR) stock took a bath after earnings last week, but one very important stakeholder has just bought on the weakness.

A BIGGER STORY
There is another narrative to be weaved here. As Twitter has cleaned up its trolling problem -- or at least tries to -- and the stock price has plummeted, there is reason to believe that an acquisition may be brewing again. Except for one thing...

Now that Jack Dorsey has purchased stock, the rules and regulations that govern insider transactions may have put a kibosh on that takeover idea for at least a couple of months. The SEC doesn't look very favorably on a CEO buying a chunk of stock ahead of a takeover. But the real question has become -- did Jack Dorsey do this to stop a takeover bid?

He has been open about his preference to keep Twitter Inc (NYSE:TWTR) independent but the board of directors has been clear about its wish to sell the company. Maybe Jack just spun a little trick here -- he buys shares -- the company can't be sold for a while. It's just a thought.

The author is long shares of Twitter Inc in a family trust at the time of this writing.

WHY THIS MATTERS
If this kind of research on Twitter or other companies interests you then what we offer may be up your alley: Our research sits side-by-side with Goldman Sachs, Morgan Stanley, Barclays, JP Morgan, and the rest on professional terminals as a part of the famed Thomson First Call group. We do this research several times a week and we also have a list of spotlight companies.

Each company in our 'Top Picks' portfolio is the winner in an exploding thematic shift like self-driving cars, mobile data and connectivity, health care tech, artificial intelligence, Internet of Things, drones, biotech and more. For a limited time we are offering CML Pro for $19/mo. with a lifetime guaranteed rate. Get the most advanced premium research along with access to visual tools and data that until now has only been made available to the top 1%.