Tim Cook's Secret is Out: Apple Pay is Exploding

PREFACE
While Apple's earnings were digested by the market rather negatively, there was literally a single sentence that appears to have gone unnoticed but might have been the single most important thing Apple CEO Tim Cook said.

Here's how big China's mobile pay market is going to get. 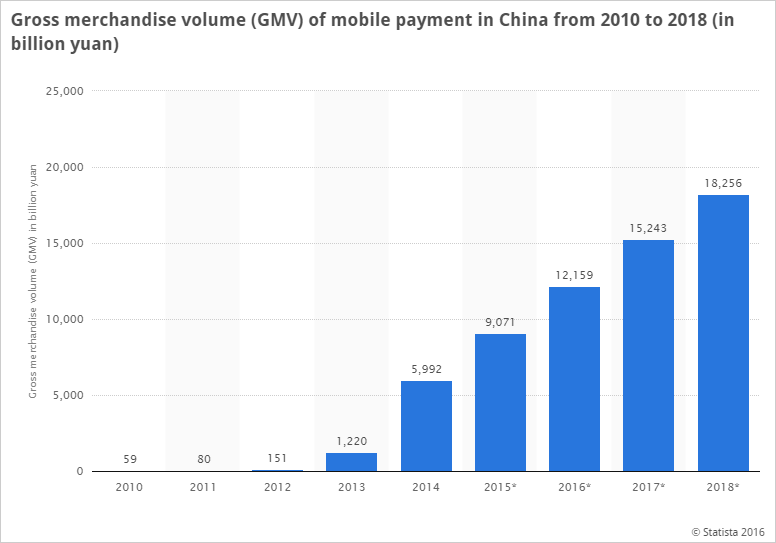 But the real news is how the impact of Apple Pay is going to be colossal for the company and what Tim Cook said, in passing.

STORY
While Wall Street has been calling Apple a "phone company," Apple has increased spending in research and development (R&D) by up 90% in just the last two-years.

Apple is investing in a lot of innovation and the iPhone is the hub that powers all of it.

APPLE PAY
Apple Pay is one of several products that Apple has introduced that is so large it could be a stand-alone business in and of itself.

Consumers have spent billions of dollars with Apple Pay. In the second half of 2015, we saw significant acceleration in usage, with a growth rate ten times higher than in the first half of the year.

APPLE'S DOMINANCE
The number of people getting into mobile pay is expected to hit nearly half a billion users within two years and they will generate three-quarters of a trillion dollars in transactions. The battleground is set.

Given what we know about market share and what Tim Cook revealed about Apple's growth, which is substantially higher than the rest of the market, it's time to recognize that Apple has already begun diversification away from iPhone revenue -- and Apple Pay is a piece of that diversification. 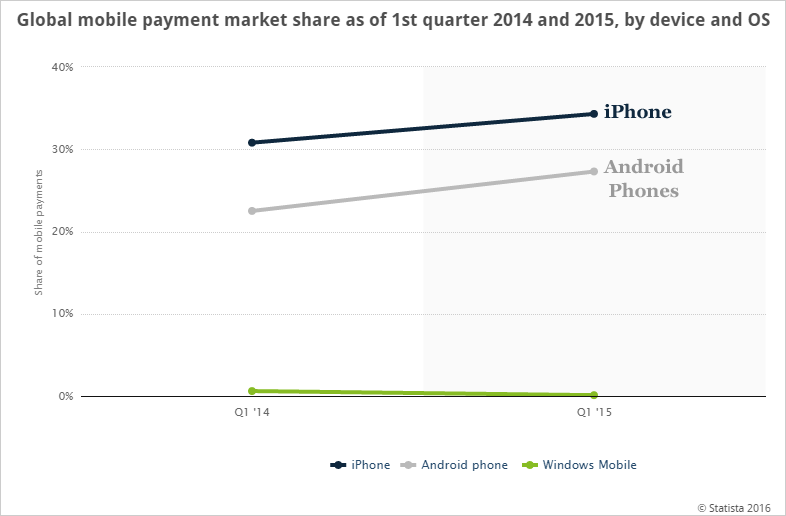 We can see that Apple's iPhone accounted for 34% of the market while Android phones came in at 27%. But there's more. Here's the chart, just looking at tablets: 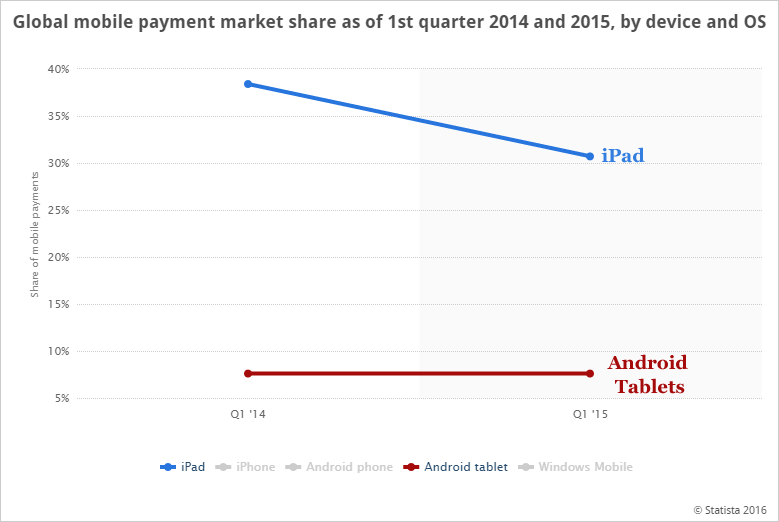 We can see that the iPad accounted for 31% of mobile payments, while Android tablets came in at 7.6%. All told, Apple's iPad and iPhone control a staggering 65% of the mobile pay market. Again, this is market expected to reach over $700 billion in two-years.

BIGGER FUTURE
If that $721 billion number in two-years feels small, try the further out forecasts from Bank of America:


"[Bank of America is] convinced of growth that measures fully 200 fold in just seven years. By the year 2022, the mobile payments growth will reach a combined total of around $3 trillion."

So that $700 billion market within two-years is expected to reach $3 trillion five-years after that. Apple is very quietly taking massive market share, entering China and signalling to the market that its growth rate is faster than previously forecast.

In the second half of 2015, we saw significant acceleration in usage, with a growth rate ten times higher than in the first half of the year.


COMPLICATIONS
Tech firms are obsessed with the getting their payment technology in front of people to send cash to friends using an app, even though it's a money losing business.

A VP of Paypal put it this way: "We think of it as an engagement play; there's a monetization aspect that comes second." Richard Crone, chief executive officer at Crone Consulting said that adding the ability for owners of newer iPhone models to send each other money could double usage of Apple Pay by those customers in 18 to 24 months.


"If I send you $50, and you are not on Apple Pay P2P service, you have to enroll in it. It's a viral application."
Source: Bloomberg

The bottom line is as mobile pay gains traction, people won't be using ATMs or credit cards as much. "If iPhone users start connecting Apple Pay to their bank accounts, they could bypass credit cards entirely when sending money to friends and potentially for in-store payments, cutting out middlemen" (Source: Bloomberg).

If you want to make a bet on which company will lead the mobile pay revolution, let's start with the one that has the best selling piece of technology ever, just suprased one billion active devices used in the last 90-days and saw it's mobile pay system growth rise 1,000% in six-months.

MONETIZATION
Although the charges in China are unknown, in the U.S. Apple gets 0.15% of all credit-card transactions and 0.5 cents per debit transaction, according to people familiar with the matter. Rickard Crone said "in three to five years, [mobile pay] could take 20 percent of credit transactions." For the record, Visa (V) and Mastercard (MA) combined have market caps above $260 billion and have combined annual revenues of over $22 billion.

Get one stock gem a day: Get Our (Free) News Alerts.

WHY THIS MATTERS
Apple Pay makes up just one little piece of what Apple is becoming. In fact, the Apple TV is a considerably larger potential business -- turning Apple into a bundler of apps (HBO GO, Showtime, ESPN, Netflix) which effectively turn it into one of the largest 'cable providers' in the world.

If any of the information we just covered feels like a surprise, in many ways it is. The analysts that represent the wealthiest 1% have no interest in sharing this information. But CML Pro research sits side-by-side with research from Goldman Sachs, Morgan Stanley, Merrill Lynch and the rest on pro terminals -- with one difference -- we made CML Pro available for the public.

Apple is one of just the precious few on the CML Pro 'Top Picks' list. Can you imagine the other 12 names on the list that cover artificial intelligence, Internet of Things, cyber security, automotive technology, biotech, apparel, restaurants and more.