The Companies Buying Back Stock; And Then The Real Secret

PREFACE
A hot topic of late has been stock buybacks. Is it a worthy investment of money or a borderline accounting shenanigan to boost earnings per share (EPS)?

Couldn't the money better be spent on a dividends or research and development? Or is this a wonderful line in the sand drawn by the best companies in the world saying out loud, "our stock is worth more than the market says, and we're buyers in size right now?"

We'll review this with beautiful visuals, and then we'll talk about the single most powerful metric that the top .1% are using and beating the market because of it.

STOCK BUYBACKS
Let's examine all technology and biotech companies over $30 billion in market cap. We'll start with the raw numbers -- simply rank the companies buy the size of their stock buy backs, without adjusting for company size. Moving down the line we see Microsoft coming in at number two, then Qualcomm, Oracle, and finally our first biotech, Gilead. Note that we won't find Facebook (FB) or Amazon (AMZN) on this chart -- the firms do not purchase their own stock -- and since they don't pay dividends, we know they invest all free cash flow into R&D.

But let's do this together with a bit more finesse. Next we will chart these same companies, but we will rank them by stock buy backs per dollar of asset. The story is quite different. 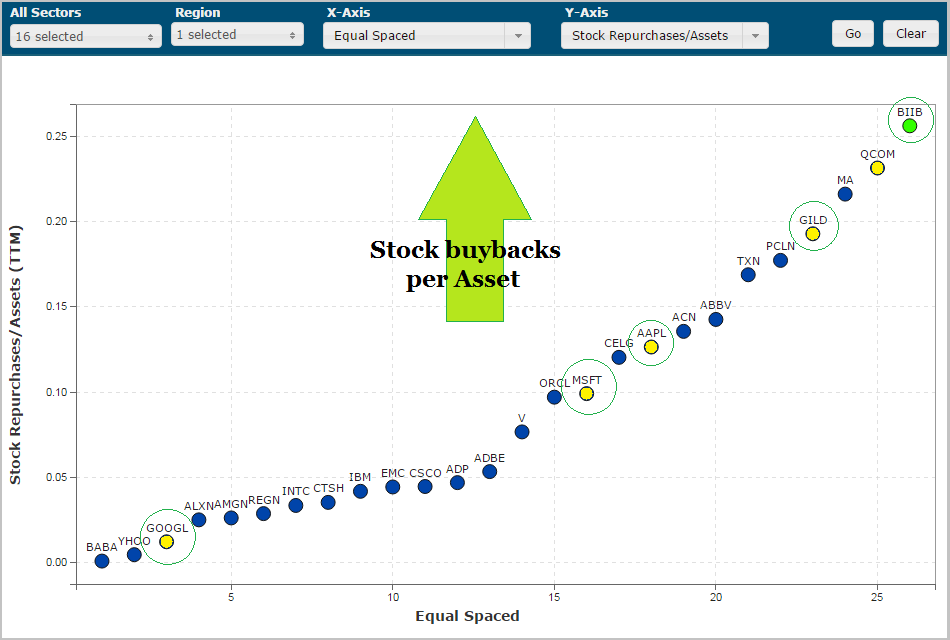 In fact, the bear market in the IBB biotech index in 2008 saw a 33% drop. In the latest fall, the bear market has seen IBB drop 40%. Yes, the biotech sector is in a worse bear market than during the "Great Recession," and we haven't even seen a correction in the broader market. In fact, the Dow Jones Industrial Average is up on the year.

We note that on this chart, Apple and Microsoft hardly look like outliers.

Finally, we note that Qualcomm comes in second on this chart -- no matter how you slice it, Qualcomm's woes in revenue growth have turned the company to buybacks, not investment. In fact, here is a chart isolating QCOM -- the blue bars chart R&D while the gold line charts revenue: Finally, let's really dig into this data and plot stock buy backs on the y-axis and R&D on the x-axis: We can see that no other company in the world spent more on R&D than Alphabet / Google; check it out way on the right hand side of this chart. Intel and Microsoft come in second and third. Again, this population only includes companies that buy back their own stock. If we added Amazon to this chart, it would rival Google for the largest spending in R&D.

Now, let's get to what really matters -- the gem that really drives stock value.

THE NEXT HUGE WINNERS
How a company spends its cash is critical to its life blood. Buybacks are good to a point, but investment in R&D is better as long as revenue growth continues. It turns out there is one single measure that if you take the top five companies in the entire large cap market over the last two-years, they have doubled the S&P 500. If you take the top 10 companies, they have tripled the S&P 500.

We won't hide it from you -- this isn't a teaser -- here it is: revenue per employee:

Friends, this is the information that the top 0.1% use. This is how the greatest transfer in wealth we have ever experienced has moved money to the top 0.1% from everybody else. It's just access to information, that's all. Our purpose is to provide institutional research to all investors and break the information monopoly held by the top .1%. Here's how we do it: