PREFACE
March 21st was Apple's big day -- they revealed new products, updates and ideas for the future. But, two announcements were absolutely seismically disruptive, and we're going to talk about one of them.


WHAT WE LEARNED
Apple released tvOS 9.2 and introduced support for folders for apps. We'll look at a picture together that will seem totally benign -- then together we'll see why it's not only not benign, it's actually one of the most combative moves the company has ever made under any CEO: 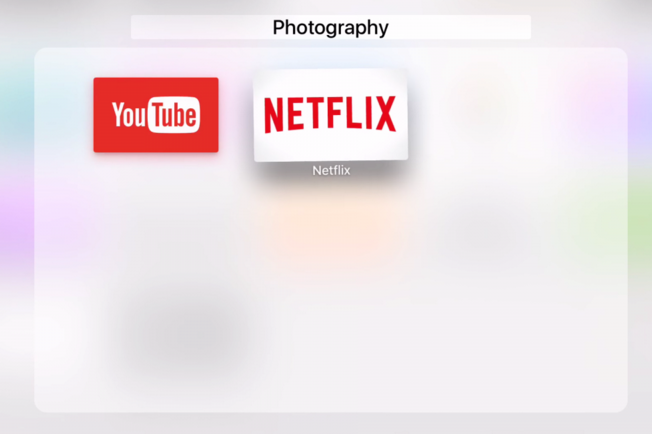 It looks simple enough doesn't it? Here's why just that little bit was an atom bomb.

APPLE TV: INTRODUCTION
A review of Apple TV from WSJ has such a good title, that I'll just leave right here: Apple TV Review: A Giant iPhone for Your Living Room. And a quote:

"Think of Apple’s fourth-generation box as a way to turn your TV into a giant iPhone."


Global Equities' Trip Chowdhry noted that the Apple TV platform is problem for Netflix, he argues, since in this Apple app ecosystem, Netflix would be just another app, or a "second-class citizen." (Source: Barron's).

A STEP BACK
Streaming Video on Demand (SVoD) is just one of a few themes in technology that is exploding higher. In fact, worldwide revenue from just this segment will grow from $12.4 billion in 2015 to nearly $27 billion within five-years, and this is the first kill shot for Apple. Here's the chart from Statista:

As large as that growth is, even just in the United States, less than half of the country has access to SVoD. It will take time, but that number will reach near 90%.

But that’s not the epic shift that's coming.

SALES
Estimates come in as high as 25 million Apple TVs to be sold in 2016 in a market that shows strong growth moving forward. On the latest earnings call, Tim Cook said:

"We had our best quarter by far for Apple TV sales, and the number of apps developed for Apple TV is growing rapidly."
Apple

Now here's the first part of seismic shift and after that, the combative attack on everyone -- and Apple is going to win.

APPLE TV: CONNECTED HOME
Apple TV is the next big move Apple is taking to bring its ecosystem into your home, literally everywhere.

A company called Grid Connect launched new ConnectSense electrical plug sockets with integrated Wi-Fi that support control via Apple’s Siri voice recognition system. So you can turn products on or off with just your voice (Source: Forbes). Of course, the technology goes much further.

Our physical homes are going to become the next market place and the Apple TV is now the front door.

But that isn't the really big shift, either.

APPLE TV: THE EPIC CHANGE
There are 133 million households in the United States alone with a cable TV subscription (Source: AYTM). Remeber that number.

Outside of TV and we learned this: On the earnings report on 7-16-2015, Google disclosed that watch time for YouTube rose 60% in the second quarter and the video service had more viewers aged 18-49 on mobile alone than any U.S. cable network.

We can try to guess which content provider will win: Nettlfix (NFLX), Google's YouTube (GOOGL), Amazon's (AMZN) Prime, Facebook, Hulu, whatever. Or, we can find the company that is going to pull it all together in one place.

Now, enter Apple TV: The Motley Fool reports that Apple is rumored to be working on a subscription TV service, one that would serve as a replacement for traditional pay-TV providers. Now, remember our first image -- let's expand it:

Apple is going to bundle ESPN, HBO Go, Showtime, NBC, MLB, and even Facebook and the NY Times along with whatever other cable networks we love – and it will also combine Netflix and allow access to YouTube. Yes, Apple is going to become the largest cable bundler in the world and the first to allow all venues of viewership.

And the provider, the hardware, the interactor, the bundler, the ecosystem -- that's the Apple TV. That’s tens or even hundreds of millions of subscribers paying our $30-$40 a month for cable and apps and the checks go to 'Apple, Inc.'