From smartphones, wearables, streaming video on demand, and online video, to advertising, e-commerce, the cloud, and virtual reality -- it's these companies that will transform the future. Let's examine them in seven charts. 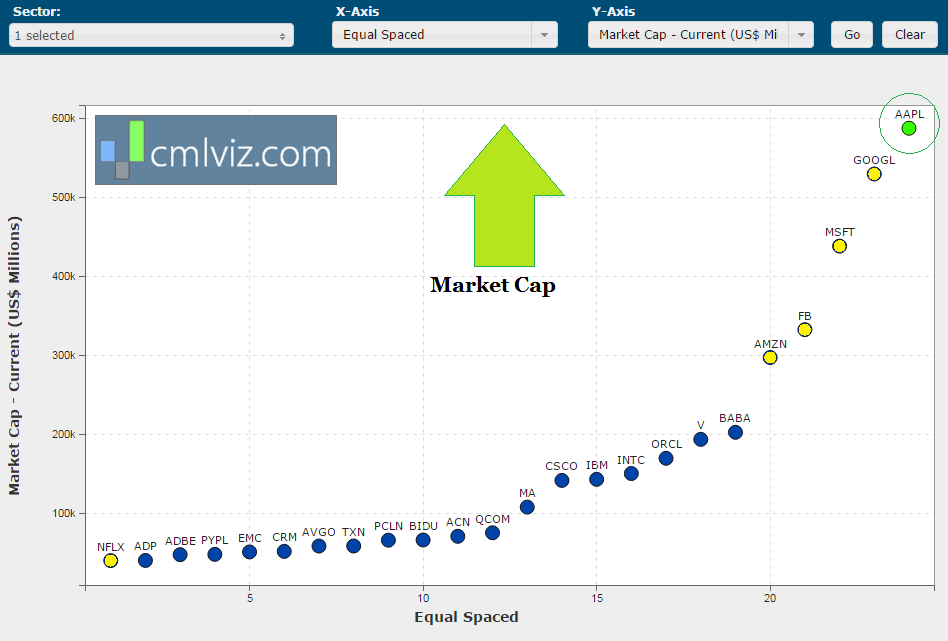 It was once unimaginable to consider a company reaching the one trillion dollar mark in market cap, but both is more than half way there and Google is right behind it. These two mega caps are the most valuable companies in the world in any sector.

CHART 2: REVENUE
Let's look at the revenue generated by these companies in the trailing twelve-months (TTM): 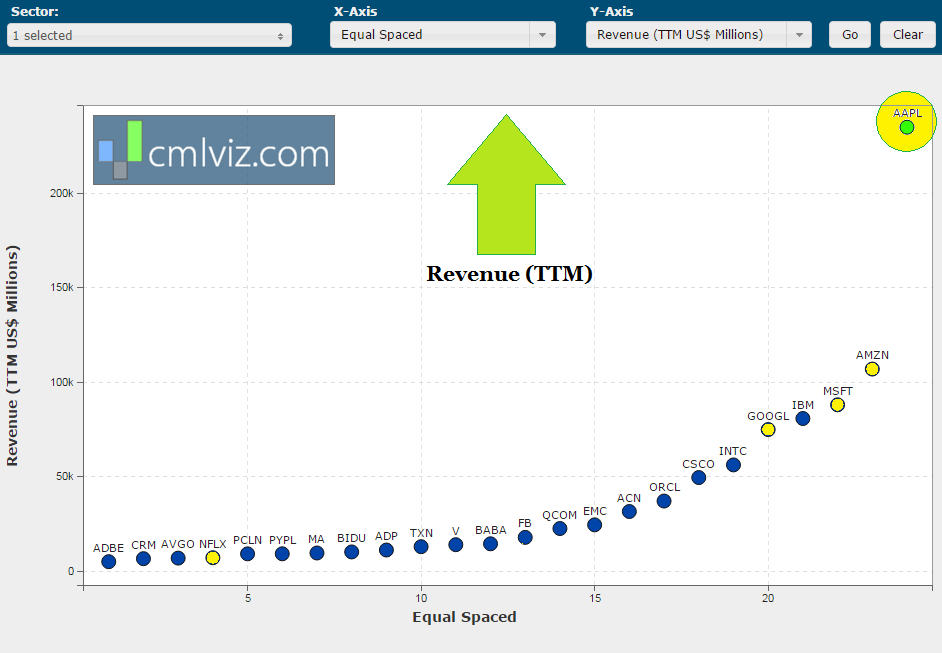 Apple again tops the list with the largest revenue of any technology firm. The surprise may come from Amazon, which comes in at number two and by a rather staggering amount. By the end of 2017, First Call estimates put Amazon at over $150 billion in revenue, which are nearly double Google’s recent results. 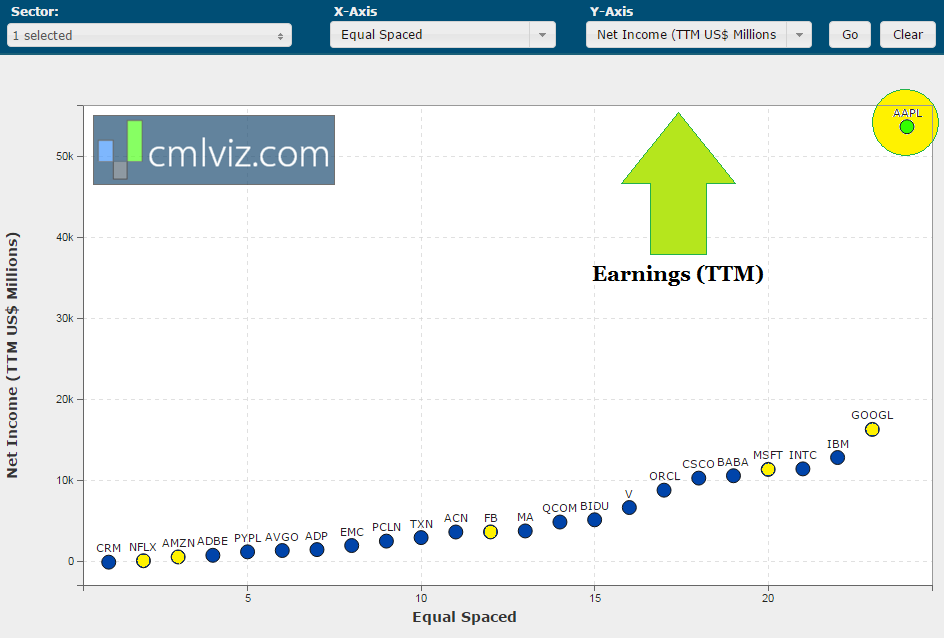 Make it three for three for Apple as the company tops the list again. But this time we see a difference so great that we almost need a separate chart for the rest of the peer group. For all the clamoring by the bears of an Apple descent, let us remember that as of now, no company has ever delivered larger earnings than Apple in a year in any sector, in any country on any exchange.

CHARTS 4 AND 5: RESEARCH & DEVELOPMENT
First, let's look at the raw amount spent on research and development (R&D) in the latest quarter: 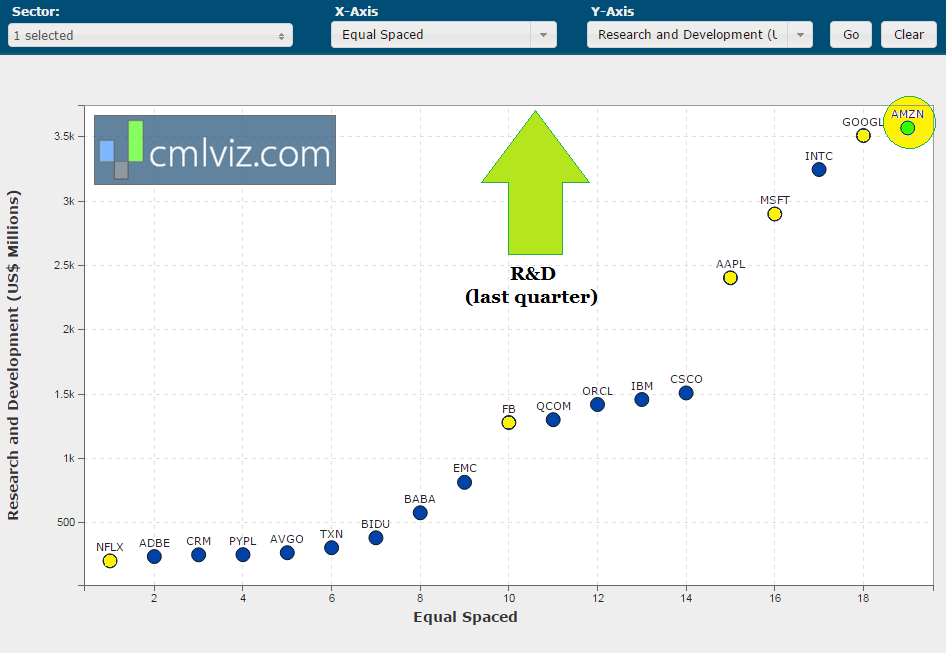 Perhaps it may surprise you, but Amazon is the largest spender on research and development but the headlines often miss this reality. Amazon doesn't list a line item on its income statement as "research and development," but rather lists "technology and content." The mainstream media has missed this so many times it has become an ongoing joke amongst analyst insiders.

Coming in at number two is Alphabet's Google. Note that while Apple is the largest company in tech world by market cap, revenue and earnings -- it is not spending the most on R&D. Having said that, Apple has increased in R&D spending by fully 80% in the last two-years and the innovation coming is breathtaking.

Now let's take a look at R&D again, but this time scale it to size. We look at R&D expense per $1 of operating expense: 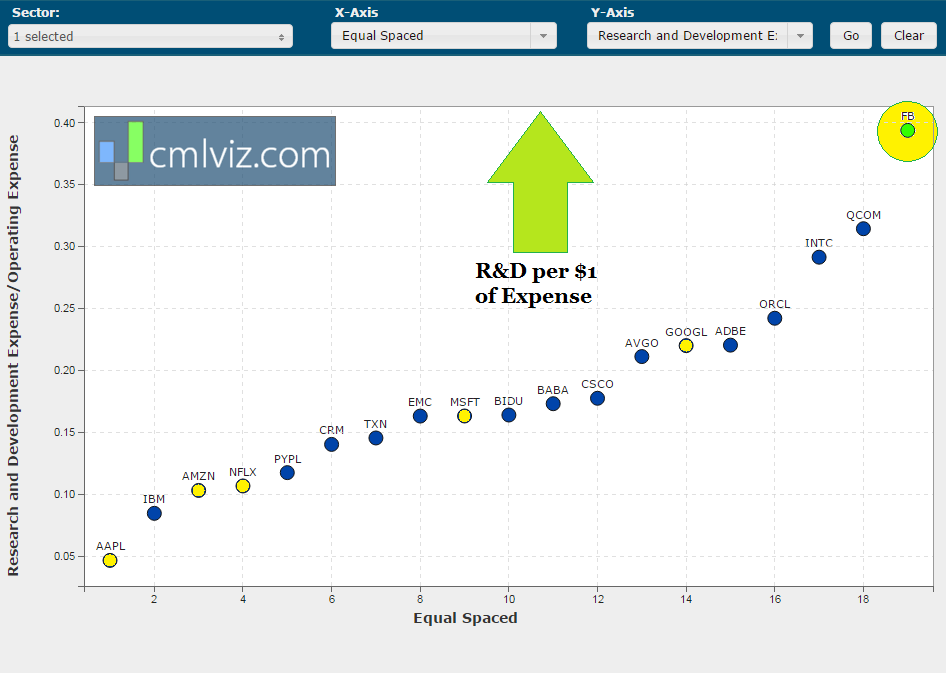 This may be the most fascinating of all the charts. It turns out that Facebook spends more on R&D than any other technology company per $1 of operating expense. We also see that Apple drops all the way to the bottom.

CHART 6: BUYBACKS
The scale of stock buy backs in the recent bull market has been unprecedented. In fact, some analysts believe that nearly 60% of the stock volume on exchanges has been due to company's repurchasing their own stock. That's a frightening reality for those that are looking for a widespread reason to believe buying shows strength in the market. 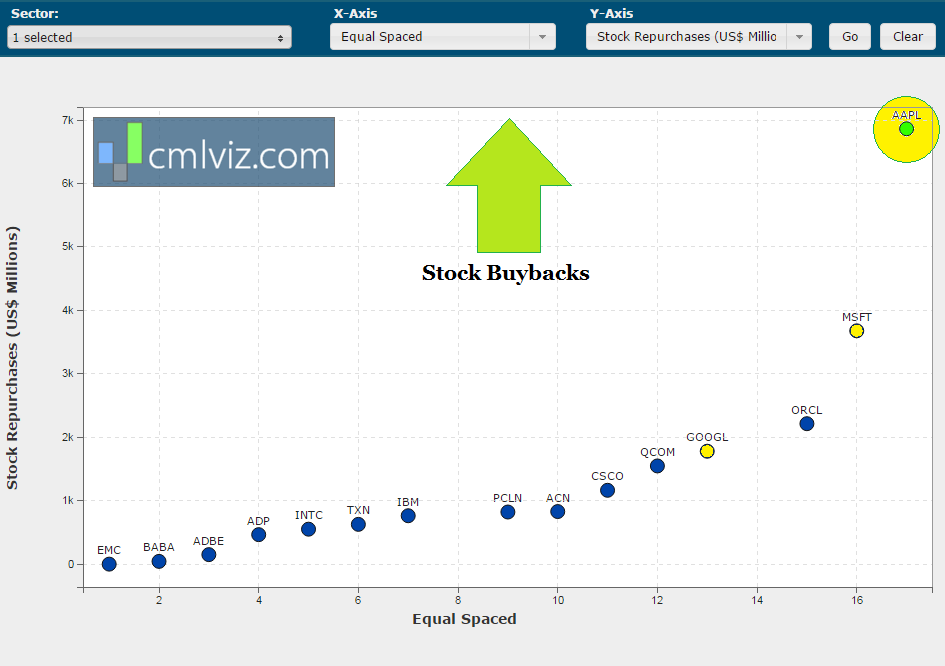 While Apple is one of our favorite companies in the world as an investment, its buyback binge has not only been unprecedented, but worrisome. Apple has purchased more of its stock that the value of Netflix times three over the last few years. It's relieving to see some of that expense now go to R&D, where Apple has turned on the growth engine again.

You'll note that Facebook, Amazon and Netflix aren't on this chart -- those firms have found other places to spend their corporate cash.

CHART 7: PRICE TO SALES
Finally, we can see exactly how the stock market is pricing growth when we look at the price to sales (P/S) comps: 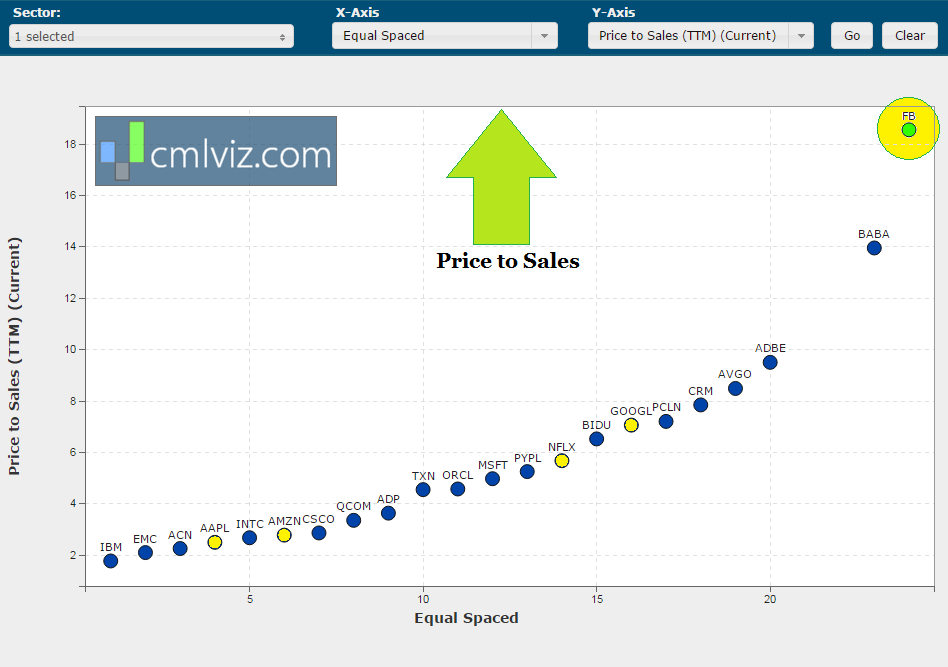 Facebook has earned itself a premium far and above its mega cap peers and that's strictly a reflection of the anticipated growth. If Facebook hits its numbers, the firm will generate well over $33 billion in revenue within two years, nearly a doubling of its latest year.

WHY THIS MATTERS
Of course this is barely the start of the real analysis. There's so much going on with Apple, FANG and Microsoft it's impossible to cover in one report. But, to find the 'next Apple,' 'next Apple,' or 'next FANG stock,' we have to get ahead of the curve. This is what CML Pro does. Our research sits side-by-side with Goldman Sachs, Morgan Stanley and the rest on professional terminals, but we are the anti-institution and break the information advantage the top .1% have.