Apple: 3 Stunning Facts Before Earnings That Mean Everything

PREFACE
Apple (NASDAQ:AAPL) will realize its first year-over-year sales decline this quarter when it reports earnings at the end of the trading day.

Here's the thing though, a stock price isn't based on the next two quarters -- it's focused on free cash flow into perpetuity. Here are three facts that, based on main stream media coverage, you would think were locked in some secret government safe as classified documents. But they aren't classified documents -- they're public information that Wall Street would prefer you didn't know.


FACT 1: APPPLE IS GAINING MARKET SHARE
Regardless of iPhone sales and revenue this quarter (or next quarter), we must examine data that is actually relevant to the future. Here's one snippet that is earth shaking for the firm and noon other than Apple's CEO is even talking about it.

In fact, when you read the next fact, you might question the accuracy, so we'll show it to you straight from Tim Cook's lips and then in a research note Goldman Sachs sent to institutional clients.

That was in the last earnings call. And if Tim Cook doesn't carry enough voracity, here's a note from Goldman Sachs surrounding an independent survey it conducted (emphasis added):


The survey [] indicates a decent chunk of iPhone 7 sales, near 25%, coming from people switching from other platforms, like Android, suggesting that Apple will continue to gain market share."

No matter how you slice it, whether sales cycles are slowing, or whatever other catch-phrases are out there that hyper focus on the next quarter, just take a step back and realize that Apple is gaining market share, not losing it. That reality will positively impact earnings and revenue in the future.

FACT 2: APPLE HAS NEVER BEEN MORE RELEVANT
Facebook (NASDAQ:FB) is 'cool'. Amazon.com (NASDAQ:AMZN) is 'cool'. Netflix (NASDAQ:NFLX) is 'cool'. But the main stream media would have you believe that Apple has lost its 'cool' factor.

Now, that's not a trivial accusation -- Apple is only able to charge a premium for its products because its brand is so well recognized as a high quality, if not luxury, item. Let the noise of click bait news die down, here is another fact:


69% of teenagers surveyed are currently iPhone users. That's the highest interest in the iPhone among teenagers since at least 2013.

Teenagers are compulsive smartphone users and many spend six hours a day on their phones. But most importantly, a teenager grows into an adult and brand loyalty is a subject that has been studied for decades.

Apple is more relevant now to the growing populace of future consumers than it has been since 2013. Apple is not losing its "cool factor," friends, it has never been cooler. And that means, it has never had more pent up demand from young consumers.

FACT 3: APPLE DOMINATES
We won't get into a conversation about the total and utter misrepresentation of the Apple Watch. Suffice it to say that the Apple Watch sold 200% as many units in its first year as the first iPhone did. Yes, that's right, 12 million Watches were sold in year one versus 6 million iPhones in year one.

But forget that -- we're discussing market power and this chart is the perfect example of why Apple is not only a market leader, it totally and utterly defines every market it exists in (via Statista): 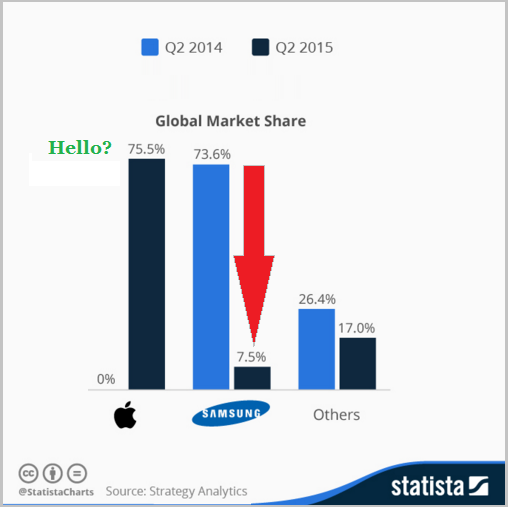 The Apple Watch didn't exist in 2014 so it carried 0% market share, while Google's (NASDAQ:GOOGL) device held nearly 75% of the market. Then 2015 happened.

Apple jumped to 75% of the market while Alphabet / Google fell to single digits. Again, it's not an argument about whether the Apple Watch is going to be a success (it will), it's a demonstration that Apple has never been more relevant, more dominant, and more powerful with its brand.

WHY THIS MATTERS
If any of the information we shared feels like a surprise, in many ways it is. Apple spans almost all of technology's transformative themes and looking one to two quarters in the future is not how to find a proper investment. Further, to find the 'next Apple,' or 'next Google,' we have to get ahead of the curve. This is what CML Pro does. Our research sits side-by-side with Goldman Sachs, Morgan Stanley and the rest on professional terminals, but we are the anti-institution and break the information advantage the top .1% have.