Apple's Secret Revealed: Apple is Taking Over a $120B Industry

PREFACE
Breaking news revealed that Hulu has taken the first step that will change everything about the way hundreds of millions of people access cable TV. It also serves as a reminder that the Apple TV is coming for cable, to kill it, and then to own it. That's a $50 billion cable TVmarket and a $70 billion cable advertising market.


HULU
First, here's the news that came out today from Hulu:


Hulu is developing a subscription service that would stream feeds of popular broadcast and cable TV channels [] a move that would make the company a competitor to traditional pay-TV providers and other new digital entrants.

This new service would compete with cable TV, and here's how it works:

As the cord cutting trend has proliferated, both pay cable and broadcast channel s are realizing that they need to decouple their content from a burdensome cable subscription package. They have turned their networks into apps -- like HBO, Showtime, ESPN, ABC, FX, Fox News, USA and a long laundry list of others.

With this move, we can now subscribe to Hulu, hand select our cable bundle, and pay for only what we want, and discard the rest. Cable bills will go from hundreds of dollars to $30-$50. It's a brilliant move, with one catch.

Apple is preparing to do the same thing, was waiting for Hulu to do it first, and is now ready to step in and take all of it.

THE PRIZE
Streaming Video on Demand (SVOD) revenue is climbing at astonishing rates. Here's a forecast from our friends at Statista:

We're looking at a segment that will grow 120% over the next five years to nearly $27 billion. This segment is dominated by Netflix (NASDAQ:NFLX) and secondly, Amazon (NASDAQ:AMZN). Here's a great info-graphic from Statista: 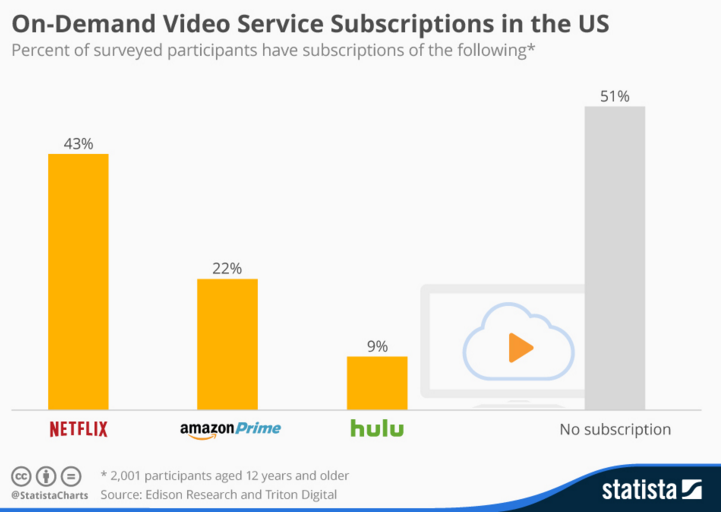 The market is still untapped, with 51% of American households still unable to use SVOD -- it will grow, no one is concerned about that. But that's just a part of it. Online video portion is also booming.

Both Facebook (NASDAQ:FB) and Snapchat announced that they now both receive 8 billion video views a day. Here's what we learned from Alphabet / Google's (NASDAQ:GOOGL) YouTube on the latest earnings report:

APPLE
Estimates come in as high as 25 million Apple TVs to be sold in 2016 in a market that shows strong growth moving forward. On the earnings call that ended 2015, Tim Cook said:

"We had our best quarter by far for Apple TV sales, and the number of apps developed for Apple TV is growing rapidly."

Now here's the seismic shift and the real gem:

NEW KING
There are 133 million households in the United States alone with a cable TV subscription and 75% of those people watch TV everyday (Source: AYTM). But, Comcast noted that nearly one quarter of its new subscribers in Q4 2015 signed up for a "skinny bundle" of channels rather than the large bundle. The big, heavy, expensive cable packages are a dying breed.

So, we can play the game that tries to guess which content provider will win: Disney, HBO, Netflix, YouTube, Amazon's Prime, whatever. Or, we can find the company that is going to pull it all together in one place. Now, enter Apple TV:

Just like Hulu, Apple TV is planning to allow a bundling of cable networks and apps and charge a monthly fee. In fact, it's the secret in plain sight if we just look at the Apple TV desktop:

Whether it's a TV channel, online video on Facebook, streaming video on demand from Netflix or YouTube, it's all going to sit in one place and we all get to choose what we subscribe to. That's 133 million cable subscribers in the US alone. That's 75 million SVOD subscribers in the US alone. That's over 20 billion online video views a day. And it all will have one home: The Apple TV.

BUT WHAT ABOUT HULU?
Hulu is actually owned by a consortium of the national broadcasters. It was first created to compete with Netflix and for all intents and purposes it has failed -- the Netflix brand was too strong to displace. Apple's target has always been to wait for a market to form and then to go ahead and take it all. Here's one example:

In 2006, 60 million smartphones had been sold. The iPhone entered the market in 2007. By 2015, over 1.2 billion smartphones were sold and Apple sold more than 80 million iPhones in just three-months in the holiday quarter of 2015. The same was done with the iPod.

Apple is going to create a subscriber base of hundreds of millions of people, each paying $40 a month to "Apple, Inc." and that revenue stream will be recurring and therefore given a valuation two to three times higher than Apple's current hardware business. When it comes down to it, it's just easier to have one platform with everything there for us. It's brilliant, combative, and also a huge money maker.

Apple is going to take the entire SVOD industry, put it in its pocket, and then take cable along with it. Note to Time Warner Cable (TWC), Comcast, Netflix -- here comes the real giant.

To identify Apple and then go beyond, to find the next Amazon or next 'FANG stock' we have to get ahead of the curve. This is what CML Pro does. Our research sits side-by-side with Goldman Sachs, Morgan Stanley and the rest on professional terminals, but we are the anti-institution and break the information advantage the top .1% have.

Amazon is one of just a precious few 'Top Picks' for CML Pro. Each company identified as the single winner in an exploding thematic shift like artificial intelligence, Internet of Things, drones, biotech and more. In fact, here are just two of the trends that will radically affect the future that we are ahead of: