This dossier first appeared in CML Pro -- the institutional research built to break the information asymmetry that the top 0.1% hold.

Preface
Today we will discuss Top Pick Apple (NASDAQ:AAPL) with regard not just to the upcoming earnings report, but the future at large.

Apple (NASDAQ:AAPL)
Before we look forward with Apple, we must look back. So, here are the facts, first.

HISTORY
Apple released its iPhone 6 series back on September 19, 2014. This was a gigantic shift for the company because it was the first large screen phones they had produced -- sort of catching up with Samsung's Galaxy and Note franchises. The results were astoundingly good. Here is a chart of Apple's calendar Q4 revenue (aka the holiday season quarter). 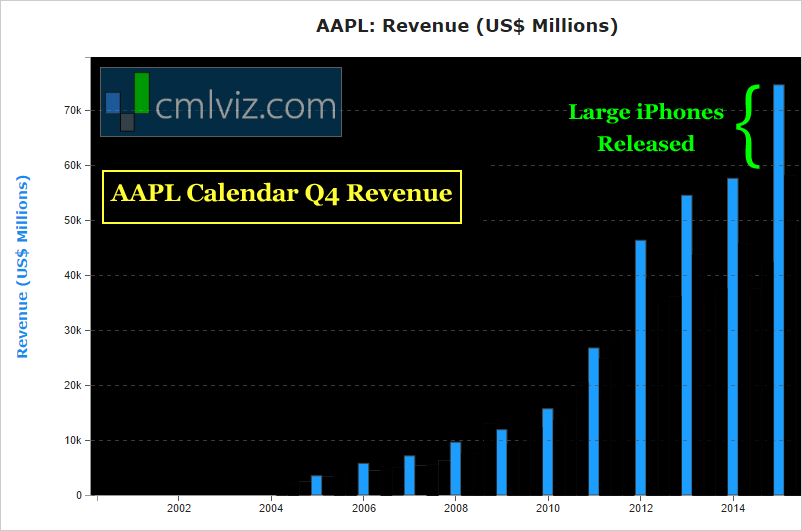 We can see that huge spike at the end of 2014. While that is a revenue chart, that quarter was also the single largest quarterly earnings ever reported by a public company.

But, many analysts opined that the pop was based on pent up demand for a larger screen phone, and less about Apple's newly found additional market appeal. That was a reasonable guess -- nobody knew the future.

But, as it looked like demand might be falling, the mainstream media found a new click worthy idea -- that Apple was going to shrink. Much to many people's surprise, here's what happened in the holiday quarter ending Dec 26th, 2015 (the next year). 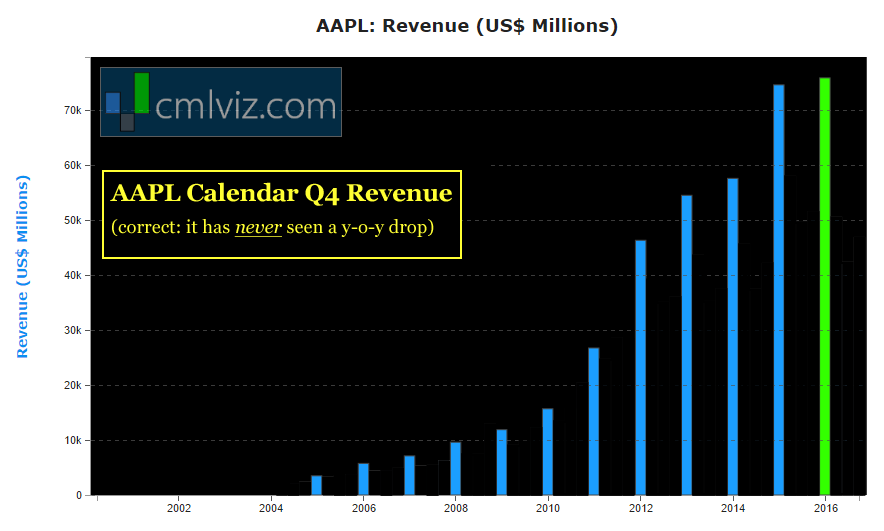 Even in the face of an absurd up tick, Apple actually grew revenue again, and it broke the all-time record for largest earnings ever by a public company yet again. As that chart reads, Apple (NASDAQ:AAPL) has never seen a year-over-year drop in revenue in its holiday quarter in the relevant time (over a decade).

I know that sounds like a total reversal of what you may have read in the news -- but we are sharing the financial statement data here -- no opinion in these charts. Now, non-holiday quarter revenue has definitely dropped in 2016 from 2015 -- that's not misleading, that is also fact.

For the record, while we don't know yet, Apple has guided, generally, that they will break their own all-time revenue highs again in this upcoming earnings release (2016's holiday season, but they may not break an all-time high in earnings).

Very few analysts have Apple not growing that bar yet again -- even in the face of the "disastrous iPhone 7," which wasn't a disaster at all (at least not yet).

SOMETHING HAPPENED
While stories about Apple's demise grew to be the norm, the story really caught hold in 2016. Apple (NASDAQ:AAPL) stock sunk to $89 and all of a sudden there were calls for a $60 stock price from some super bears.

While that was happening though, something else was building at Apple and it needs context, so if you will, let's turn to Facebook for a second.

Facebook had a huge number of people on its various properties but what it needed to do was turn that group of people into revenue. Advertising is Facebook's answer, and my goodness, they have done an absurdly good job -- so much so that Facebook now is 60% the market value of Apple.

That 60% valuation is put in to better context with this table, comparing the company's revenue and earnings (after tax) to Apple.

Yep, Facebook's revenue in the trailing-twelve-months is about 10% as large as Apple and its net income is about 15% as large, yet its market cap is 60% as large.

Now, a big part of that disparity is growth expectations -- Facebook has growth pegged at high double digit percent and Apple is trying to squeak by with low single digit percent growth. But that's not all of it.

The real reason we see this is the different sources of revenue. Apple sells hardware, mostly iPhones, and those are one-time events. In other words, after an iPhone is sold, that's it, the revenue is collected and it doesn't recur unless the owner comes back to purchase another one later on.

Facebook's advertising revenue is recurring. Advertising is just a service, let's call it that. A business purchases this service, and it will continue to purchase the service as long as it provides the needed return on investment.

The great part of Facebook's business is that even if user growth stagnates, the service it provides generates more and more value as time goes on.

As anyone who has advertised knows, as time passes, the advertising becomes more refined, more accurate, and more profitable for the buyers. Or, we can just say, the service becomes more valuable. When we add user growth on top of that, well, we get a company that really is pretty small in terms of revenue and earnings but is now the fifth largest company in the world by market cap.

SO WHAT?
That reality -- that service revenue is worth more to valuation because it is recurring and predictable -- hasn't gone unnoticed by Apple (NASDAQ:AAPL) and this where the bullish thesis for the company builds.

First, unlike Facebook, Apple Inc gets paid to grow its user base -- people buy iPhones, Macs, iPods, iPads, whatever. While a Facebook user joins for free, an Apple user joins for hundreds of dollars.

Now, as we read the news carefully, which is to say we avoided the click bait, we noted that the press releases from Apple started sounding a lot like a services company.

We broke the story when Eddie Cue, the head of Apple Services, noted that iMessage rates hit 200,000 messages a second. This makes Apple one of the largest social media networks in the world as a side effect of its other businesses.

It's on the periphery of what we're talking about here, but CML Pro also broke the story that Apple filed a patent for a Social Network centered on its iPhone (The Secret's Out: Apple is Creating a Social Network).

As time passed, CML Pro has hyper focused on Apple Services as a whole. Here are snippets from our dossiers:

Apple Services is turning into a legitimate revenue and earnings driver for the company. In fact, while services accounted for just 14% of revenue, the segment accounted for nearly 25% of operating income. Here's a revenue chart for Apple (NASDAQ:AAPL) Services. 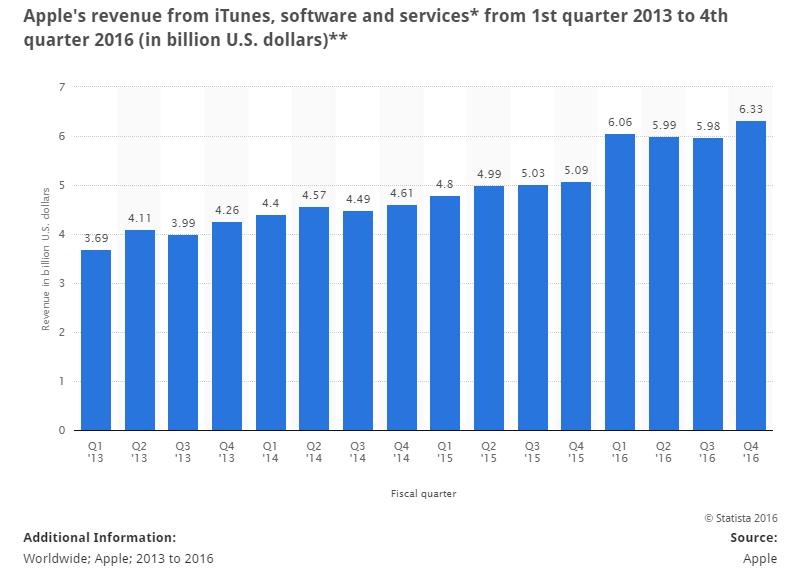 For context, Apple's revenue in the last year from Services alone is about the same size of all of Facebook's revenue in totality.

Apple Services comprises of iTunes, iCloud, the app store, Apple Music, Apple Pay and other Apple software and services. This segment is Apple's "diversification" play away from the iPhone.

Tim Cook noted on the last earnings call that Apple Services would be showing growth even if iPhone sales stagnate, implying that the current install base of users is spending more and more money with their iPhone on services. He also noted that within a year, Apple Services would be large enough on its own to be a Fortune 100 company.

Embedded in Apple Services is the potential giant that is Apple Pay. As of right now, Apple Pay has yet to make a material impact on revenue, but its potential is gigantic. In fact, it's so large and so complex, we have dedicated several CML Pro dossiers to the subject with great specificity. Here is one of the better ones: Update: Apple Pay is Turning into a Big Win.

I rarely recommended leaving a dossier to look at another, but in this case, I really do encourage a read of that piece. It's too long to include in this dossier, but it is the very guts of Apple's future. Even further, given what we are going to discuss below about Apple Inc recent failures, this is a huge part of the long thesis for the company.

I just can't say it anymore plainly, if you own Apple stock, you should read that dossier on Apple Pay. In any case, Apple Pay saw 500% year-over-year growth per the last earnings call, with more transaction volume in September of 2016 alone than all of 2015.

THE PRESENT
Now, these are the realities at Apple (NASDAQ:AAPL). The company will probably break its own all-time high in revenue and could break another all-time high for all pubic companies ever in earnings with the quarterly report this week -- but even if it slips a little -- it doesn't really matter. The future is Services and, as an aside, its hardware business keeps growing as the iPhone 8 (possibly called the iPhone 10) will be released later this year.

But all the while, Apple Services is turning into the driver behind the company. Apple is doing the one thing no other company in the world can do -- it has combined the largest hardware business on planet Earth, which is now the most profitable business of any type on planet earth, while also building a huge services company.

WHAT TO WATCH
First, we must remember that whether or not Apple Inc sells more iPhones than it did in the year ago quarter, the total number of iPhone owners is growing. To use our Facebook corollary, the number of MAUs is growing. So then we need to watch...

As long as Services revenue is growing (we already know that the number of total iPhones is growing), then we have our bullish thesis.

APPLE INC'S FUTURE
While the hardware to Services business is huge, Apple actually has a lot more going on. Rather than try to fit everything into one dossier we direct you to our prior discussions:

And the risks:
* Risk Alert: Apple Faces China's Wrath
* It's Time to Have a Serious Talk About Apple

We remain bullish on Apple Inc for the reasons posted above and in the various dossiers we have authored.

The writer is long shares of Apple (NASDAQ:AAPL).

WHY THIS MATTERS
If you enjoyed learning about Apple (NASDAQ:AAPL) but actually being ahead of the curve, this may be up your alley: Our research sits side-by-side with Goldman Sachs, Morgan Stanley and the rest on professional terminals. Of our Top Picks, Nvidia is up 250% since we added it. Ambarella is up 60% since we added it. Relypsa was taken over for a 60% gain and we are already up nearly 50% on Skyworks.