Updated 2-19-2017: Apple has released a trailer for its second show - an impossible to copy stake in the ground using the massive celebrity and talent already on Apple Music (trailer below).

Preface
Cord cutting is coming -- and Apple (NASDAQ:AAPL) is ready to disrupt the video world, with the added bonus -- to humiliate the skeptics again.

REVOLUTION
A revolution has already arrived with respect to video. Some estimates have us consuming 80% of our content from video by 2020. Facebook and Snapchat boast their numbers of over 10 billion video views a day. Alphabet Google's YouTube has more viewers aged 18-49 than any other broadcast or cable network in the United States -- and that's on mobile alone.

Average daily time spent with online video has grown from 35 minutes to over 70 minutes in a matter of years: 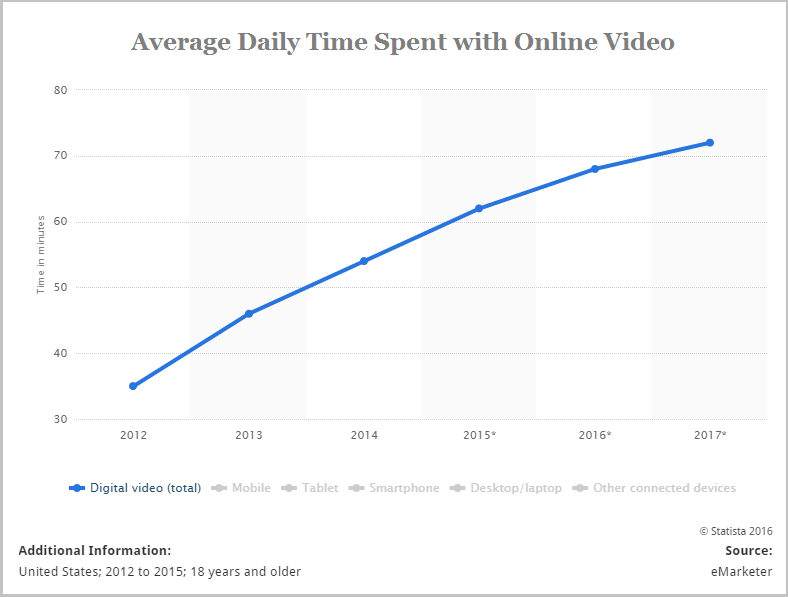 Even further, Netflix and Amazon have become absolute masters of the original content world -- producing their own shows, winning Emmys and now, for the first time ever, Amazon has an original feature film that has been nominated for six Oscars.

But the real question everyone wants answered is -- where is Apple?

SERVICES
By now we all know the story for Apple (NASDAQ:AAPL) -- turn its hardware heavy business, namely the iPhone, into a Service heavy business, which has the benefit of recurring revenue rather than one-time revenue from a phone (or Mac) sale. Apple Services include the App Store, iTunes, Apple Music, Apple Pay and iCloud.

Apple Services has hit lift-off trajectory, reporting over $7 billion in sales in the latest quarter and well on its way to being the size of a Fortune 100 company on its own by the end of this year per CEO Tim Cook. Here's a quick look at the revenue trend rolled up into a 4-quarter moving average: 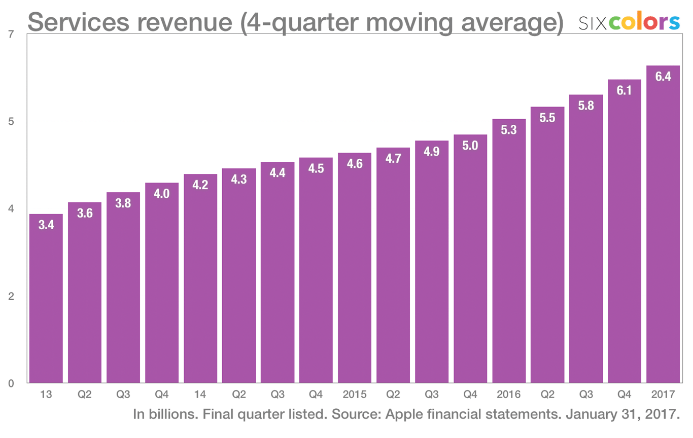 
Even more impressive was Apple (NASDAQ:AAPL) CEO Tim Cook stating that he intends to double Services revenue by 2020. Here's what he said:


We feel great about this momentum, and our goal is to double the size of the services business in the next four years.


VIDEO
While the App Store and Apple Music have been pushing growth in Services, it's time for Apple to look at video -- but that will come inside the Apple Music subscription. On January 12th, CML Pro reported Apple Goes After Video - Yeah It Really Matters. From that dossier we got this:


Apple will be (finally) stepping into the realm of original video content. Apparently Apple has had discussions with top Hollywood producers to acquire rights to new shows, and even further, that this new content could be delivered by the end of this calendar year.


And just a few days ago, we see the Apple (NASDAQ:AAPL) first trailer for its first original show, called "Planet of the Apps." While the general reception has been negative by skeptics, that's because people have no idea what they're talking about, really. In fact, it's actually fun to relive the skeptics' reviews. Not fun -- hilarious.

Here is the trailer:

Apple is doing what it always does -- giving people what they want, not what they need and there simply has never been a better company ever that has delivered to want better than Apple. But there's more.

We can doubt Apple Inc -- we can laugh at how late the firm is and listen to skeptics, or we can remember that Apple is almost never the first to market. Blackberry was a giant as 60 million smartphones were sold in 2006, the year before iPhone. Now Apple sells 200 million phones a year and the market bears 1.2 billion a year.

There has always been cacophonous sneering from skeptics at Apple. Matthew Lynn of Bloomberg now infamously known as "that guy" said, and we quote:


But you know what, others made similar comments, and other products were also laughed it. Try these "reviews:"

Friends, we don't know if Apple Inc will succeed with video, but we do know that everyone doubting it is pretty much par for the course.

WHY THIS MATTERS
If this kind of research on Apple or other companies interests you then what we offer may be up your alley: Our research sits side-by-side with Goldman Sachs, Morgan Stanley, Barclays, JP Morgan, and the rest on professional terminals as a part of the famed Thomson First Call group. We do this research several times a week and we also have a list of spotlight companies.

Each company in our 'Top Picks' portfolio is the winner in an exploding thematic shift like self-driving cars, mobile data and connectivity, health care tech, artificial intelligence, Internet of Things, drones, biotech and more. For a limited time we are offering CML Pro for $19/mo. with a lifetime guaranteed rate. Get the most advanced premium research along with access to visual tools and data that until now has only been made available to the top 1%.