Apple (NASDAQ:AAPL) Is Heating Up

Apple (NASDAQ:AAPL) Is Heating Up

This article is a snippet from the original published to CML Pro members on 4-25-2017.

LEDE
While we focus on the smaller technology and genomics companies, now is the time to focus back on Apple (NASDAQ:AAPL), which is heating up in its progress.

Here are some of my favorite headlines:

But, alas, Apple is up 40%, is still the largest company in the world, and there is reason to believe that the company's future is still bright.

HOW TO GET APPLE RIGHT
With all the analyst and media coverage on Apple Inc, the real key is not to try to find that little missed gem of information, believe me, whatever it is, it has been uncovered. The real key is actually very simple -- listen to Tim Cook and just assume he isn't lying. Seems easy enough, right?

Here are some Tim Cook statements, just from the recent earnings call, before we get to the new data.

Before you read these little snippets, I want you to consider, first, what it is you believe is happening at Apple with respect to the iPhone 7, the Apple Watch, Apple Wearables, Apple Pay and Apple Services.

* iPhone 7 Plus has earned rave reviews for its advanced new features, especially the dual camera system, which produces stunning portraits and high-quality zoom. This is a uniquely Apple feature that is surprising and delighting our users.

* It was our best quarter ever for Services, with almost $7.2 billion in revenue.

* Services are becoming a larger part of our business, and we expect the revenues to be the size of a Fortune 100 company this year.

* Apple Pay continued its strong momentum, with the number of users more than tripling over the past year[] Transaction volume was up over 500% year over year Apple Pay on the Web is delivering our partners great results.

* It was also our best quarter ever for Apple Watch, both units and revenues, with holiday demand so strong that we couldn't make enough.

* With AirPods off to a fantastic start, a strong full first year for Apple Watch, and Beats headphones offering a great wireless experience using the Apple-designed W1 chip, we now have a rich lineup of wearable products.

* [iPhone] Customer demand was even higher than our reported results, as iPhone unit sell-through was up 8%.

* We also saw 50% of our iPhone sales in China were to switchers and first-time buyers, which is a very high number that we're pleased with. And obviously, our total installed base continues to grow there in the strong double digits.

* If you look at the absolute number of upgraders, it was the highest that we've seen in any quarter.

Those were all facts. While the media had us believe that iPhone 7 was going to be a dud, had few features worthy of an upgrade and would fall flat, it did not. Rave reviews, record sales, exceptional demand, highest absolute number of switchers -- these are all phrases, word for word, from Tim Cook.

We wrote a dossier abut this Apple is Getting Dead Serious About Growth just one month ago, and shared this:

[N]ew data released by IHS Markit revealed the top ten selling smartphones in the world and the 'failing Apple Inc iPhone' took not just the top spot - not just the top two spots - not even the top three spots - fiends, Apple Inc Phone took all of the top four spots. 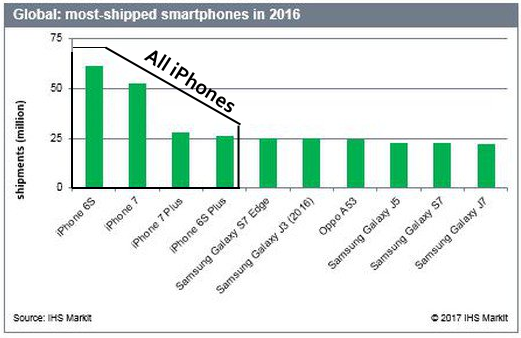 We wrote a totally dedicated dossier to demand for the iPhone 7: Apple iPhone 7 Demand Could Beat Expectations.

We'd like to claim so sort of brilliance to our analysis, but really, all we did was read the data and listen to the CEO. That has yielded nearly 40% returns.

I'm really not sure when it become in vogue to doubt Apple's iPhone, when a few years ago it was totally the opposite, but it has happened, and every time it has been wrong. And now, we see more data (our emphasis added):


There are still nearly 50 million iPhone 6 users, in addition to the more than 20 million iPhone owners who have an iPhone 5 model or earlier, according to new data from comScore.

These 70 million collectively represent a massive base of users who are ripe for an upgrade to an iPhone 8 or the likely larger, iPhone 8-plus.

Almost taking a backseat in comScore's latest data dump is that iPhone ownership in the U.S. has hit an all-time high. There are now 85.8 million iPhones being used by smartphone owners 13 years of age or older.


And then we got a note from Morgan Stanley brought to us by Forbes:


Apple's shift to the OLED iPhone is apparently so massive that Morgan Stanley upped its forecast of the displays used on that phone by a whopping 2X this past week. But delays are also baked into the forecast.

Back in November, our checks pointed to 50M [million] OLED panel supply to Apple but the range has expanded to 50-100M with production yields at Samsung the key variable.

MORE
All of this is still against the backdrop of our broader bullish thesis for Apple that we lay out in several dossiers:

The Astonishing Truth Behind Apple Services

Update: Apple Pay is Turning into a Big Win

Apple's Next Big Thing May be Here Soon

WHY THIS MATTERS
Apple continues to be a marvel, but it's finding the technology gems that will turn into the 'next Apple,' 'next Google,' or 'next Amazon,' where we have to get ahead of the curve. This is what CML Pro does. Our research sits side-by-side with Goldman Sachs, Morgan Stanley and the rest on professional terminals.