Apple Inc -- The Upside is Still There

Apple Inc -- The Upside is Still There

This article is a snippet from the original published to CML Pro members on 5-17-2017.

LEDE
While Apple (NASDAQ:AAPL) is making all-time highs and the focus has been squarely on both the new iPhone cycle and Apple Services, it turns out there are other stories brewing, and they complete a rather broad bullish thesis for the tech giant.

We have three updates today, that fit within one of the broadest most far reaching collection of bullish theses we have collected for one company.

STORY
There are three parts to this update, and we will start with Apple's investment in Corning.

Apple announced it would invest $1 billion in a "advanced manufacturing fund" to promote technology driven manufacturing jobs in the United States. Some people felt this was a sort of peace offering to the current U.S. administration in an effort to ease the way toward an one-time tax holiday for Apple's massive overseas cash hoard, which in total now tops a quarter trillion dollars.

For my take on the cash hoard, you can feel free to watch my interview with Peter Armstrong on CBC.

Apple announced a plan to invest $200 million of that $1 billion into Corning, which is a long time Apple supplier, making the glass for the iPhone and iPad touchscreens. The monies pegged for Corning are specifically noted to be invested in research and development (R&D) and glass making divisions.

With a portion of the money now clearly defined in its distribution with an Apple supplier, the cynical crowd has grown a bit quieter, and here's why.

The next iPhone is going to have wireless charging, if any of the superstar analysts that cover Apple Inc are right. That means the back of the iPhone is going to need something other than just metal. Here is what Oppenheimer analyst Andrew Uerkwitz, who covers Corning, said:


Metal can interfere with wireless charging technology. That means you need glass on the back of the phone, but glass that won't break. Or you need to use ceramics. Corning has a long history of investing in both glass and ceramics.


That is semi-interesting, but likely baked into the expectations for iPhone X (or 8, or whatever it's going to be called). We actually side more with Patrick Moorhead of Moor Insights -- that this is a move to progress Apple's augmented reality vision.

Remember, Tim Cook has said out loud that augmented reality is the future for Apple (NASDAQ:AAPL), and CML Pro broke the patent filing that supports this claim. In our dossier Apple Files a Patent for Augmented Reality, we dive deep into the renderings and obfuscated language of the filing and came out with this:

Here's a snippet from the patent filing and then a rendering Apple included in the filing.

The technology Apple Inc. is inventing will allow an user to create a 3-dimensional map of an area, in real time, which is then overlaid with information that augments their reality. But it's not just video games that Apple is after. While the filing discusses auto mechanics and teachers it also went a step further -- a step that is becoming clearer and clear.


Doctors might also use it to superimpose medical information over a live video of a patient, or a X-ray or MRI could overlay the video so medical professionals could better diagnose an issue.


Apple is going after Healthcare technology -- that is another of the segments that Tim Cook has been rather explicit about. In our dossier Apple Leaps Forward in a New Market we discuss the news that Apple (NASDAQ:AAPL) has a "secret" small team of biomedical engineers to develop sensors that can noninvasively and continuously monitor blood sugar levels to better treat diabetes.

This would be a continuous monitoring of glucose levels - something that has never been done before, and in that vein, it has been called the "holy grail" of medical devices.

Remember that last sentence, we are going to turn back to it in a bit with the second update to Apple. On October 3rd, 2016, we wrote Apple is Getting Dead Serious About Health Care. In that dossier we got a look at this device:

Fast Company reports that "Annual global health spending is more than $9 trillion." In fact, if we take that spending out to 2020, $1 out of every $5 will be spent on health care. Here's what Tim Cook told Fast Company in 2016:


We've gotten into the health arena and we started looking at wellness, that took us to pulling a string to thinking about research, pulling that string a little further took us to some patient-care stuff, and that pulled a string that's taking us into some other stuff.


CML Pro went further when we penned the article "Apple Goes After Enormous Medical Technology Market," in where we note that Apple officially stepped into the health care technology realm by partnering with GlaxoSmithKline plc (NYSE:GSK).

TAKING A STEP BACK
What we are seeing is the investment in Corning is possibly (likely?) a push forward in Healthcare Tech, which CML Pro has long argued is also tied to Augmented Reality.

Now, let's move further down the path of health care tech, and this time, with the Apple Watch.

SECOND STEP: APPLE WATCH
Any member of CML Pro for at least six-months knows our belief that the Apple Watch is not a failure, but even further, is turning into a large success. We even have a dossier Breaking: Apple Watch is Winning, and it Really Matters.

The narrative was written before the product was even released - The Apple Watch was going to be a disaster. The data flew in the face of that narrative, but it didn't matter - when the mainstream media decides something is a fact, it's a fact.

Or, we could look at actual facts - that CML reported since 2015. Here is a gorgeous representation of the impact the Apple Watch had on the world of watches well back in 2015: 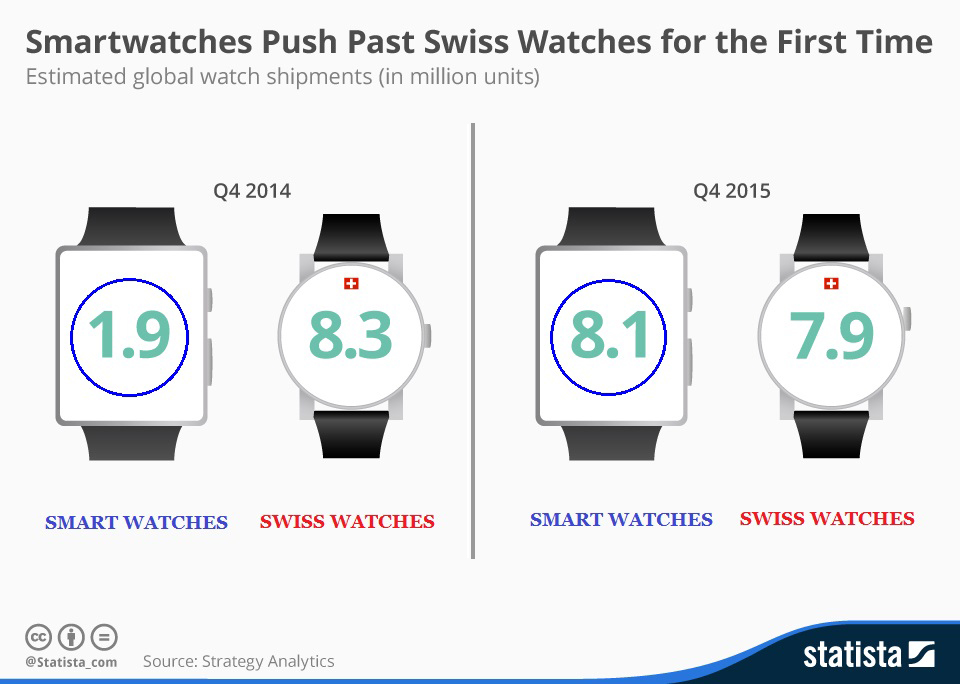 Just to be perfectly clear: Smart watch sales rose more than 4-fold just as Swiss watch sales started to dip. Again, throw out our biases – this is data driven. This was the first time ever that the smart watch segment sold more units than the Swiss watch market.

As for that 8.1 million units back in Q4 of 2015, yep, estimates have it that more than 5 million were the Apple Watch.

But that's the past, and the narrative continued.

We recently got news from Strategy Analytics that Apple shipped 3.5 million wearables in the first calendar quarter of 2017, 59% rise from last year's quarter. That number has made Apple Inc the largest wearables seller in the world, moving past Fitbit. Apple currently commands 16% of the global market for wearables, Strategy Analytics reported.

And then earnings came, where Tim Cook continued to beat the drum. Here is a quote directly from the last earnings call:

* It was also our best quarter ever for Apple Watch, both units and revenues, with holiday demand so strong that we couldn't make enough.

The argument for the Apple Watch as failure hinged on the idea that after the first release, Apple would not be able to find "new" people to buy the product -- that this was for Apple fans only. That exact argument, literally, was used for the iPod, iPhone and iPad. Remember this?

And now we turn this back to health care.

APPLE WATCH AND HEALTHCARE
A study done by the University of California at San Francisco (UCSF) noted that "the Apple Watch is 97 percent accurate in detecting the most common abnormal heart rhythm when paired with an AI-based algorithm."


Cardiogram began the study with UCSF in 2016 to discover whether the Apple Watch could detect an oncoming stroke. About a quarter of strokes are caused by an abnormal heart rhythm, according to Cardiogram co-founder and data scientist for UCSF's eHeart study Brandon Ballinger.

"Cardiogram tested the deep neural network it had built against 51 in-hospital cardioversions (a procedure that restores the heart's normal rhythm) and says it achieved a 97 percent accuracy in the neural network's ability to find irregular heart activity."

But, while we're on the iPhone, let's discuss update number three.

iPhone - INDIA - YES
Another topic CML Pro has been adamant about is the opportunity Apple has in India.

On April 2nd, 2017, we published Apple is Getting Serious About India. That story is too long to reprise here other than a few snippets, before we get to the update.

India is the second largest smartphone market in the world, Apple has nearly no footprint in the country, but that may be about to change dramatically and Wall Street estimates have not accounted for that change.

First, we start with the size of the market. This is the chart of smartphone owners in India, through time:

A tectonic shift began in 2015 with a visit by Apple's CEO Tim Cook and a private meeting with India's Prime Minister. While the meeting was rather private, the results were not - we included a full discussion on our dossier Apple's Secret: The Hidden Handshake with India Is Enormous.

While there are doubters out there surrounding the cost of an iPhone in India relative to the average selling price of a smartphone, of course, the analysis is weak. As we wrote:


When using China as a proxy, we see the ASP number never has to reach the $424 that the United States yields for Apple to have a success. Even further, Apple does not sell to the average.

The iPhone SE, Apple's smaller sized phone that still has beefed up hardware has always been the conduit to India. Of course, we wrote that as well. On April 23rd, 2016, we noted, explicitly that the SE was Apple's play into India. And now we get update number three:

iPhone SE INDIA UPDATE
The Wall Street Journal just reported that Apple has now already assembled its first iPhones in India -- and what do you know, it is the iPhone SE.

The manufacturing is complete and sales will start this month -- on a small scale. Yes, it's no longer "when Apple manufacturers in India," it's "right now."

We do note that the manufacturing was done in India, but by an Apple partner, not Apple itself. We also echo the WSJ's take, which is simply: "Production of SE model marks escalation of push to crack fast-growing market."