Why Apple is Falling

LEDE
Hello, all. This is Ophir writing.

Apple (NASDAQ:AAPL) is dropping hard after its event to announce the new series of hardware, in particular the new iPhone 8, 8 Plus and X as well as the Apple Watch 3.

APPLE
Normally when Apple stock dives on lukewarm product reviews we stand firmly in our position that the stock market reaction is over blown. Our simple thesis for that response is to look at demand, which is hypnotically strong, every time. That is not the case this time.

THE NEW RISK
Apple announced a more complicated lineup of iPhones this time around. It introduced the iPhone 8 series which is an upgrade to the iPhone 7, and then it announced the highly anticipated iPhone X(pronounced iPhone Ten).

Then the company made the iPhone 8 available this month, but pushed delivery of iPhone X to early November, with pre-orders starting in late October. That has created a risk -- one which I did not see then, but is quite apparent now.

It turns out that Apple hyped the iPhone X so much, and poured so much new technology into it, that it has left the demand for iPhone 8 lackluster in Apple terms. Here's what we mean.

If you go to the Apple Store, and try to purchase an iPhone 8, the wait time is essentially 1-3 days for the smaller memory version. Here is an image: 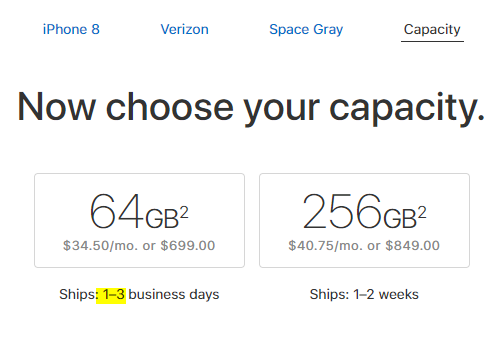 That is for the iPhone 8, in Los Angeles, on Verizon's network. The other networks are essentially the same. A normal wait time for a new iPhone release is usually several weeks, let's say 2-4 depending on where you are in the world.

There are also reports that in store lines are much smaller than before, with one report pinpointing Sydney Australia, where only 30 people were camped out for the new release. Reports from China are similar.

Here are links to two stories:

Turnout for iPhone 8 Launch in Australia 'Bleak' as Customers Hold Out for Upcoming iPhone X The iPhone 8 launch in Sydney saw "a bleak turnout," reports Reuters, with fewer than 30 people lining up outside of the Sydney Apple Store on George Street. In past years, hundreds of people have lined up for new iPhones on release day.

Tim Cook just said he "couldn't be happier" with the iPhone release (and Apple Watch 3). While sales are lower than prior models, there is one reason, a big reason, that he may actually be telling the truth.

IS THERE A PLAN?
One of the headlines that surfaced from the Apple Event was that the iPhone X was very expensive, starting at $999 and climbing to $1,200 based on the configuration.

It's possible, maybe even likely, that Apple decided to release the iPhone 8 for less to make it appear that it was not forcing Apple loyalists to buy a far more expensive phone by offering a reduced priced new model (iPhone 8).

In fact, it does appear that even in the bearish analyst notes, each tends to comment on the fact that demand reduction for the iPhone 8 is simply a reflection of the outsized demand for the iPhone X.

If that's true, then Apple will have an average selling price (ASP) significantly higher than in prior times, and if demand is in fact to the point where Apple also sells more units, then that would bring a windfall of profits larger than any company has ever seen in one quarter.

If that sounds overly bullish, it's just the choice of words -- Apple already has the largest earnings ever in one quarter, so this would be a breaking of its own record -- also known more simply as, "growth."

BACK TO RISK
While there is a rather bullish narrative to wrap around this odd iPhone selection, there is also, in earnest this time, a reasonable bearish thesis.

Apple won't be delivering its iPhone X until well into November, and if demand is very strong, it might not even be able to deliver before the holiday season in the United States. And while, certainly, if all of those sales simply occur later in the year (early 2018), then that's fine, but to consider that a foregone conclusion is a step we are not willing to take with blind faith.

Some consumers, perhaps many consumers, will not wait. And while Apple loyalists may stick around for a later date, the all-important "Android switchers" (those smartphone Android owners that switch to Apple) may not -- and that is a real risk and worthy of a stock drop, until proven otherwise.

While the mainstream media likes to talk about Apple being dead, the reality is that Apple's market share in the United States is jumping as Android loses. On January 11th, 2017, 9TO5Mac wrote iPhone market share grows 6.4% in USA, takes share from Android in most markets.

Apple gained 9.1% in the UK, mostly at the expense of Windows phones.

The iPhone grew its market share in Australia, France, Italy, Japan, Spain, the UK and USA, with Android seeing its own share drop in all of these countries bar Italy, where its growth was less than half that of iOS.

Those are Android switchers and Apple may have just put that group, or at least that trend, in serious jeopardy.

OUR TAKE
We believe the iPhone X is going to be a knock-down drag-out mega hit, and the elevated price will make it yet an even larger success. But, the risk that Apple took, as of right now, is hurting the company both with iPhone 8 sales, and potentially, with Android switchers. And that, for once, is not a false narrative weaved by a sophomoric main stream media, that is accurate.

That risk means the stock should drop, and is dropping.

But, we're not done yet. What we did not show you, and is easily missed unless you are really looking, is how hard Apple is pushing the iPhone X over the iPhone 8 -- in our opinion.

I recorded a little video arriving on the Apple Store and looking at iPhones. I have turned to video to allow you to make your own decision, as opposed to snapshots which are too selective and a be used to weave any narrative the author likes.

When you watch this video (below), decide for yourself if you feel that Apple is purposefully pointing people to the iPhone X over the iPhone 8. Here we go:

That's hardly headline grabbing footage, but we found it noteworthy.

QUICK NOTE ON APPLE WATCH 3
There have been some pretty poor reviews of the Apple Watch 3 surrounding its LTE connectivity and its battery life. This is one of those times where the reviews are meaningless. Demand is strong and that's all that matters.

Here is a snapshot from the Apple Store for that product: 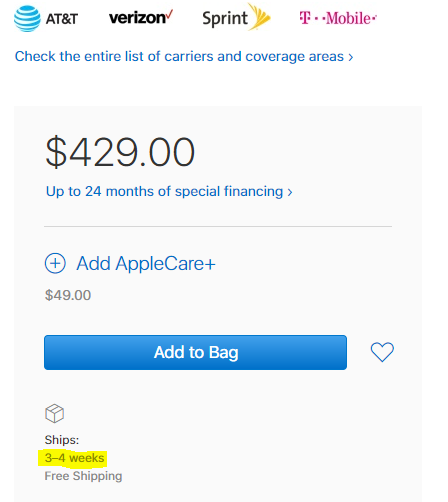 We see the Watch becoming a runaway success as people learn to use that wearable device as a standalone product -- leaving the phone at home on runs, meetings, swims, hikes, and whatever other times such a convenience could be desired.

CONCLUSION
We maintain our Top Pick status on Apple, but have certainly tempered our bullishness with an undeniable new risk. It might work out very well, but, it might not, and that is a new risk to Apple stock.

WHY THIS MATTERS
It's understanding technology that gets us an edge on finding companies like Nvidia early, finding the gems that can turn into the 'next Apple,' or 'next Amazon,' where we must get ahead of the curve. This is what CML Pro does.