LEDE
Spotlight Top Pick Apple (NASDAQ:AAPL) was downgraded today by Nomura Instinet to neutral, citing valuation concerns versus prior iPhone cycles. On the other hand, new data is out from Hon Hai (aka Foxconn), Apple's largest manufacturing partner, and it shows record growth month over month.

In that story, we noted that high profile Apple analyst Ming-Chi Kuo, of KGI Securities, had changed his view of the iPhone X cycle. The first report of a supply shortage had Kuo dropping estimates for initial fourth quarter shipments from 30-35 million to 25-30 million units.

He's now saying that Q4 2017 shipments could be "10-20 percent higher than previously estimated."

STORY
Nomura Instinet lowered its rating for Apple to neutral from buy, and here was the rationale:


We argue that the stock's gains for the iPhone X supercycle are in the late innings. We believe unit growth, if not quite ASP growth, is well anticipated by consensus and a historically full multiple.


This downgrade came one-day after had just set a new all-time in stock price. Nomura wasn't so much bearish as it was noting that the valuation for this iPhone cycle had reached the peak of prior cycles:


But there is other data -- some empirical, some heuristic -- that may point to higher growth than expected. Let's turn to that data.

That's the empirical evidence that iPhone sales are in fact booming. But there's more -- this time less scientific, but nonetheless noteworthy.

SURVEY DATA
RBC Capital's Amit Daryanani did a survey and it was reported by the great Tiernan Ray of Barron's.

Daryanani noted that demand for the iPhone X and the most expensive version of the iPhone 8 Plus were significantly better in China than even the United States.

Here are his takeaways, with our emphasis added:

This likely means tailwinds strong mix and higher ASPs should be particularly strong in the Chinese market.

This is slightly higher vs. our US survey in which 57% of iPhone X prospective buyers preferred to buy the 256GB model.

Both replacement demand and switching trends appear healthy. ~28% of prospective iPhone purchasers indicated that they were switching to iOS from another OS.


Much like Ming-Chi Kuo, Daryanani believes the reduced wait times for iPhone X are not a function of demand, but rather a function of increasing supply. Recall above that Kuo saw production from Foxconn increasing 5-10 fold from his initial channel checks.

Further, Business Insider shared a chart that shows iPhone X adoption outpacing the iPhone 8 and the iPhone 8 Plus. 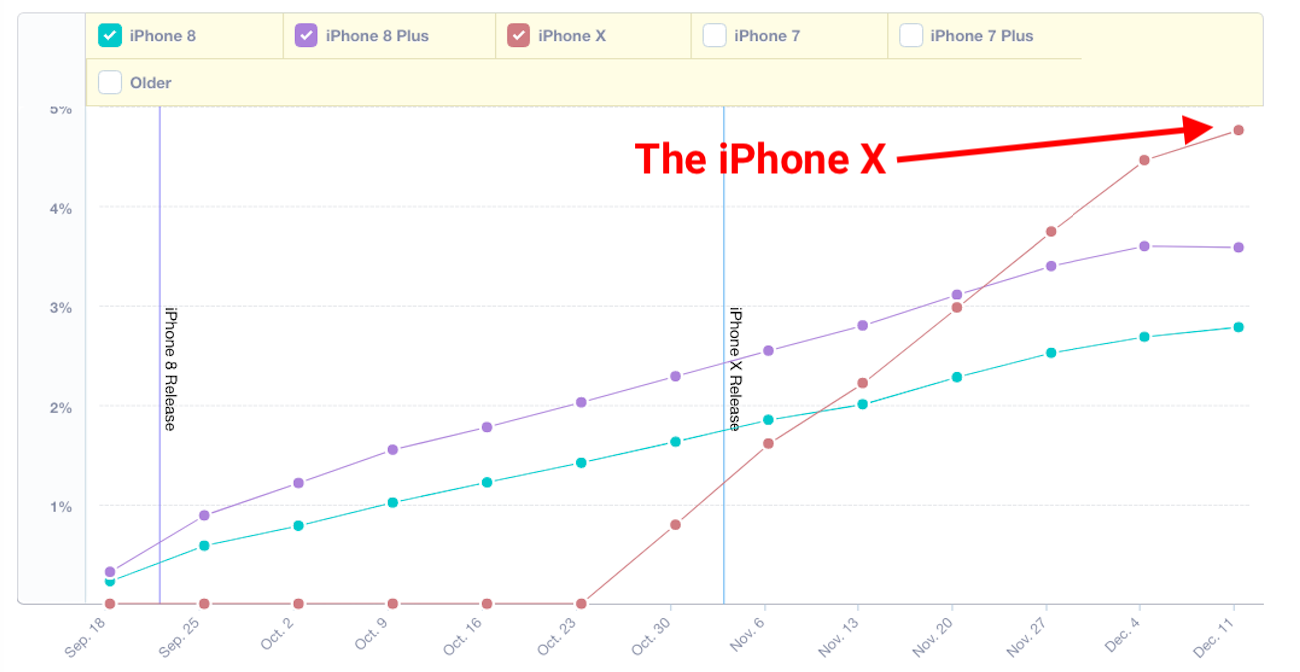 
The data for that chart comes from analytics firm Mixpanel.

ANOTHER STORY - MORE DEMAND
Another story that we have been tracking is the demand for and supply of Apple's Air Pods.

A quick visit to the Apple Store shows that AirPod orders placed on Monday won't be delivered until January. In August CEO Tim Cook said "we have increased production capacity for AirPods and are working very hard to get them to customers as quickly as we can, but we are still not able to meet the strong level of demand."

The Air Pods story is nice, but a little 'nichey,' unless you take a bit of a leap forward, which we have. We believe that the Air Pods combined with the new cellular enabled Apple Watch 3, together make an entire ecosystem for wearables.

While Apple Watch series 3 order on apple.com appear to ship same day, there is an argument to be made that the demand for Air Pods is in part a reflection of demand for the new cellular enabled Watch.

On November 14th we penned, Apple Watch is Winning, and we noted that according to Canalys research:


Apple retook the lead in the wearable band market in Q3 2017, with shipments of 3.9 million.

It posted its strongest quarter so far in 2017, thanks to the release of the Apple Watch Series 3.


Canalys Analyst Jason Low goes onto write that "strong demand for the LTE-enabled Apple Watch Series 3 has dispelled service providers' doubts about the cellular smartwatch not appealing to customers."

And then the analysis gets yet more bullish for the product (our emphasis is added):


Apple Watch Series 3 did not reach its full potential in Q3.

Service providers had underestimated demand for the new Apple Watch.


Now, when we take the sales numbers from Foxconn, which are empirical, then the survey data from RBC and analytics from Mixpanel, we see that the iPhone 8/X cycle may be nowhere near at its peak. Going further with the empirical evidence that Air Pods are sold out and delivery is weeks away with data surrounding the Apple Watch, we have further evidence that this quarter for Apple could be a massive win.

SEEING THE FUTURE
It's understanding technology that gets us an edge on finding the gems that can turn into the 'next Apple,' or 'next Amazon,' where we must get ahead of the curve. This is what CML Pro does.

The author is long shares Apple at the time of this writing.