Surprise: Apple is Crushing It After All

Surprise: Apple is Crushing It After All

LEDE
Apple just reported the single largest quarterly after tax profits ever (aka net income), and generally beat estimates for earnings, but the guidance for the current quarter was less than stellar and its booming Services business boomed, but did not KABOOM, and that was reason for some worry.

New data surrounding the iPhone's dominance has been releases, and while the "super cycle" didn't come in volume, my goodness, it has come in terms of dollars.

But it is the latest number crunching from two analytics firms that pushed Apple higher last week, and may see it test that all-time high yet again. Let's get to the data.

SURPRISE: IT IS A SUPER CYCLE
Apple did something very odd with its iPhone X super phone -- it held it back. The company first released the iPhone 8, and delayed its release of the $1,000 phone.

That was hotly contested and it was a huge risk. Analysts still disagree about the outcome, even though the outcome is now an observable fact (we saw sales and earnings). The idea that consumers would pay up more than $1,000 for a phone was risky, and it was yet riskier to let people "opt out" by just going with iPhone 8.

But, the real movement for Apple last quarter was the astonishing rise in its average selling price (ASP) per iPhone. Here is a chart: 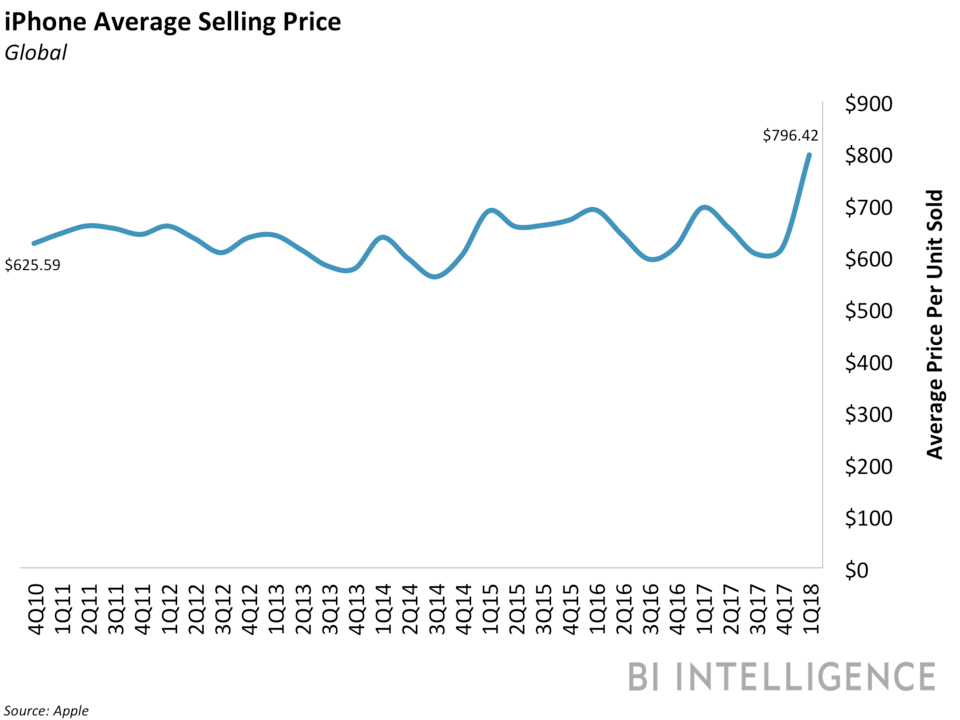 I don't know why BI decided to use a line chart rather than a bar chart, but let's let the non math people do as they will -- the data is what we want and the broken trend is still easy to see.

This cycle (quarter) saw a huge pop out of a pretty tight range. The big jump is because of the $999 super-premium iPhone X, which costs nearly $240 more than the iPhone 7 Plus, which was previously Apple's most expensive phone.


Honestly speaking, there's no comparison in the revenue, it's hugely different. In a positive way, obviously.


SO WHAT?
Counterpoint Research Director Neil Shah shared some new data and it reads pretty crazy.


The $1,000 smartphone-along with iPhone 8 and iPhone 8 Plus-helped propel Apple (AAPL) to a commanding 76% of smartphone revenue in North America and 57% in Europe.


Then Strategy Analytics came out with more data. According to the firm, Apple has taken more than half of the global smartphone revenues for Q4 of 2017.

And then we got the real data (our emphasis added):

* The iPhone's $800 ASP is three times the industry average.

And while reports have come out that Apple might ditch the iPhone X, the famed Ming-Chi Kuo of KGI Securities actually went the other way claiming that Apple was going to launch an iPhone X Plus. Yes, a larger, yet more expensive phone.

For the record, KGI also carefully noted that Apple has not made a final decision and certainly has not made an official announcement.

CONCLUSION
Wall Street wanted an iPhone super cycle, and that meant volume. Well, volume beat expectations, but then was lowered for this quarter's guidance, but revenue, that is in a super cycle. And that super cycle has given Apple all kinds of absurd statistics relative to its competitors, from size to market share.

For now, the arguments can stop -- Apple had a super cycle -- it was in revenue, and that led to the largest single quarter of earnings ever by a public company. Apple beat another mega cap's record... Apple. And it also dethroned the number three spot, which was... Apple.

As for the weaker than expected guidance, we could also just listen to Tim Cook, you know, the CEO, when he said on the earnings call:

We also note that the all-time high in ASP was also a poke in the eye of analysts that said people would not spring for the super expensive iPhone X - wrong. iPhone X was the bestselling iPhone every week it was out.

SEEING THE FUTURE
It's understanding technology that gets us an edge on finding the gems that can turn into the 'next Apple,' or 'next Microsoft,' where we must get ahead of the curve. This is what CML Pro does.

The author is long shares of Apple Inc at the time of this writing.