Breaking: Relypsa By the Numbers


PREFACE
Relypsa (RLYP) is a small-cap clinical stage biopharmaceutical company with a market cap of ~$700 million. The company has a single drug named Veltassa that treats hyperkalemia, which is a condition of fatal levels of potassium in patients with chronic kidney disease or heart problems.

Sales of Veltassa officially started in January of this year and in total it is expected to have an addressable market of 2.4 million to 3 million people and to reach peak sales of $1 billion within several years.

BREAKING
Relypsa just released its first ever sales update. I was on the conference call and Periscoped it here: Relypsa Conference Call. Here's what we know:


Initial demand for Veltassa has been encouraging.

Since Veltassa became available on December 21, 2015 through February 12, 2016, 1,229 new outpatient prescriptions were written for Veltassa.

Source: GlobeNewswire
The number of patients who received a free starter-supply of Veltassa, outpatient prescriptions filled and hospital units sold since the launch on December 21, 2015 through February 12, 2016 are detailed below.

The weekly average number for all three groups increased 86%, 168% and 50%, respectively for free starter-supply, outpatient prescriptions and hospital units.

The stock has enormous short interest. Here's the the accumulation: 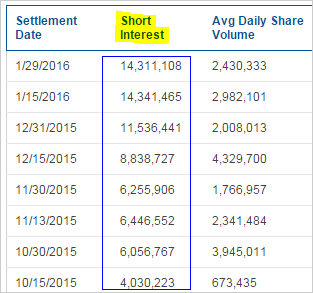 The drug is doing quite well, awareness is high, demand is high and the drug is welcomed as a much needed alternative. The immense short interest makes for a rather uncomfortable disconnect between the business and the stock.

Every time we get more data on the company, it reads positive. The 409 scripts in Janaury is larger than all seven other drugs the company considers within a comparable specialty. In fact, the largest was 300, the rest were near 100. In other words, Relypsa views the first month as essentially better than anyone has ever done before in this field. But, the stock market disagrees.

At the same time the short interest has accumulated, the closing stock price of $16.78 compares to the median price target from all 10 Thomson/First Call analysts is $45, which is a staggering 160% higher than the current price.

MORE RESULTS
Agreements have been signed with Express Scripts and CVS Caremark, the two largest pharmacy benefit managers in the United States.

This affects about 1.8 million of the 3 million-plus Veltassa-eligable patient population being covered by Medicare (Street Insider).

WHAT'S GOING ON
The Relypsa story is one that seems so bullish and at the same time so steeped in fact that it will feel almost impossible. At the same time, the stock market is never 'wrong,' and the price is tumbling.

THE FUTRE VALUE
Analysts predict that Relypsa's drug will reach peak sales in the United States alone of $1 billion. That's not to speak of Japan, and Europe. As of the close of trading today, Relypsa is trading at a confounding 0.4 price to future sales. The IBB biotech index has an average price to sales of 6 to 1. The stodgy S&P 500 has a price to sales of 2 to 1.

Now, large cap pharma AstraZeneca paid $2.7 billion to takeover ZS Pharma for its hyperkalemia drug candidate. Yes, while we can play the "price-to-sales" game all we want, a major pharma company has said outloud with its pocket book that just the chance of a drug approved in a year to treat hyperkalemia is worth more than $2.7 billion.


"The valuation gap between ZSPH ($2.7B) and RLYP (~$800M) now stands at ~$1.9B, which is embarrassing from a market efficiency perspective for several reasons."

BLACK BOX
It turns out that on news of the drug approval, Relypsa stock actually dropped nearly 40% in one day because the approval was met with a black box label -- the FDAs strictest warning.

On the conference call, Relypsa announced it would submit its drug-to-drug (DDI) interaction results,which were quite strong, to the FDA by mid-year and they expect the FDA to respond by year end.

Relypsa aims to have the six hour window cut down to three, to have the data from the DDI study included in the packaging, and to have the black box warning removed, and turned into a more general safety indication.

CONCLUSION
At a $550 million market cap as of the after hour's trade, the argument made by the vast majority of Wall Street analysts appear to be falling on deaf ears. The stock price is now controlled by the massive short interest.

But, at CML, we still hold this company as one of the few gems in small cap biotech with an approved drug, accelerating sales and a large addressable market. It had the best first month ever for a drug in its category, the company refuted accusations that it would go to the equity market to raise money, and the weekly sales gains are tremendous.

WHY THIS MATTERS
Relypsa is still a CML Pro 'Top Pick.' Patience is the better of valor -- this company has an organic growth trajectory that appears to be quite steady.

As we said at the top -- if any of the information we just covered feels like a surprise, in many ways it is. But while CML Pro research sits side side-by-side with research from Goldman Sachs, Morgan Stanley, and the rest, we are the anti-institution, and make this type of research available to our retail family for just $10 a month.

The Internet of Things (IoT) market will be measured in trillions of dollars as of next year. CML Pro has named the top two companies that will benefit. Here's cybersecurity: