Valeant Collapse: It's Much Worse than We've Been Told

Valeant Pharma is collapsing on fraud allegations. That's what we've been told. But the stock's implosion goes ever further than that -- to facts that are not only undisputed, but openly admitted to by the company's CEO himself. I promise, you will leave this article with more knowledge than you came here with, including realities that nearly all of Wall St. has ignored. Here's one:

Valeant's entire mode of operation (acquire drug companies, slashing jobs, costs, and R&D and then raising drug prices) is over. Period. The company can no longer acquire any more companies nor can it raise prices.

Quick Recap
First, the accusations are actually pretty simple and they read like this in plain English: Accusation: Valeant has literally booked revenue that didn't exist by creating a secret network of specialty pharmacies that it owned, then went ahead and sent drugs to them and counted those transfers as sales. Yes, an outright fraud. That's it.

Now, let's get to the issues before, during and after this crisis that are breathtaking.


I. Fact: Valeant is Not a Drug Company
CEO Michael Pearson reportedly believed that drug companies were terribly inefficient spending money on research and development that often went no where (Source: Fortune).

Instead, Valeant become focused on distribution, letting other firms do the R&D and then implemented a strategy of rapid acquisitions. After companies were acquired, staff was laid off and R&D was dismissed and prices on all drugs were raised. The end result was a company with an enormous amount of debt, but a stock price that was rising.

Here's the problem, debt is now an issue, and it could take Valeant down. A thorough discussion of debt is included below, below. But to give you taste, it looks like this (debt through time): 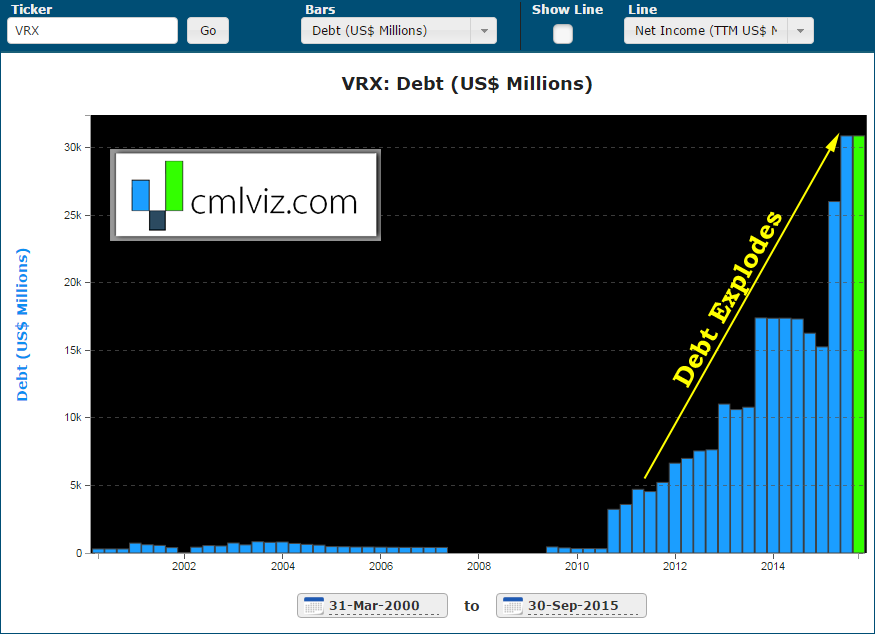 What can Valeant do if it can't borrow anymore?


II. Fact: Congress Was Already Investigating Valeant
August 14th: Even before this saga began, Valeant became the subject of vitriol due its immense price increases on two drugs to the tune of 525% and 212% that came overnight. Senator Bernie Sanders and Congressman Elijah Cummings requested information on the two price hikes but the company refused to furnish the documents saying the requested information was "highly proprietary and confidential" (Source: WSJ).

September 28th: A month and a half later, 18 Democrats on the House Committee on Oversight and Government Reform called for a subpoena of the company. The stock dropped ~15% in a day.

It takes more than click bait and a 140 characters to be an expert. Get free news alerts (once a day) from us and you will be the expert in the room. You will be powerful. Get Our (Free) News Alerts.


III. Fact: Price Gauging Was Massive
On October 5th, a Deutsche Bank analyst revealed that it wasn't just two two drugs but rather 54 other medicines in 2015 alone and by an average of 66%. Aside from the accusations, Wall St. analysts started noting that a revenue growth strategy based on price hikes of this magnitude was not sustainable. Again, this is all before the fraud accusations.


IV. Fact: Board Members of Largest Valeant Shareholders Resign
The $7.5 billion Sequoia fund had a nearly 30% weight in Valeant as of the end of June. The Wall Street Journal reports that Vinod Ahooja and Sharon Osberg stepped down from Sequoia Fund's independent board of directors and that the two "had raised concerns in recent months about whether Sequoia should have such a large position in the embattled pharmaceutical company" (Source: Barron's).


V. Fact: Debt Has Exploded
There's another issue, an inarguable issue, and issue openly admitted to and signed off by the CEO of Valeant. Here it is:

Valeant has nearly $31 billion in debt and just $1.4 billion in cash. The company's total market cap as of this writing is just $34 billion. The company has a additional "revolving credit facility" (think of it like a credit card) of $1.5 billion. Here's where it all falls apart:

Whatever happens to these fraud allegations, Valeant will not be raising prices again in the near future. The company has $2 billion in debt due in 2016, and other $2 due in 2017 and $4 billion due in 2018. Yes, that's $8 billion just in debt payments and bond redemptions (Source: Fortune).

If you're wondering whether this debt situation is normal for Valeant, the answer is unambiguously, no. Here's how the debt has exploded through time.

The main stream media doesn't have the vocabulary to understand breaking biotechnology. Get free news alerts (once a day) from us and you will be the expert in the room. Get Our (Free) News Alerts.

Debt is up 90% year-over-year. S&P downgraded Valeant on October 30th down to B+ from BB-. Here's what S&P said along with the downgrade:


"Given the multitude of legal, regulatory, and reputational issues that Valeant faces, we are revising our assessment of management and governance to 'weak' from 'fair,'
Source: MarketWatch.

VI. Allegation: WHOA!
The accusation of specialty pharmacies that were owned by Valeant making fake orders to book false sales when drugs moved from one room to another room is the allegation. Here's how it is accused of going down:

R&O pharmacy is accusing Valeant of fraud and on a grand (grand) scale. The quick and dirty is that a sole proprietor, 64 year-old Russell Reitz, sold his pharmacy for $350,000 and even before the sale was completed, other pharmacies began using an R&O identification number to bill for prescriptions that R&O hadn't filled, sometimes for drugs the store didn't stock, turning in revenue of $230 million according to the court documents (Source: Bloomberg).

Before the sale was actually done, Reitz asked why Valeant had signed an insurance-company audit for the pharmacy that Reitz still controlled. The next day, Reitz received surprise visitors from a firm called Philidor RX Services.


Reitz's effort to learn who was selling drugs in his name -- peeling back, along the way, layers of corporate structures -- emerges in e-mails, letters and other documents filed in state court in Los Angeles, as well as in a lawsuit R&O filed against Valeant in federal court there early this month.
Source: Bloomberg.


And thus the fraud allegations took off.


VII. Fact: Philidor Failed California's Sniff Test
Philidor is a mail-order pharmacy with licenses in 46 states But one state, California, said no, and here's why:

"The board, on its website, said Philidor had made misleading statements about its ownership, failing to include information on four out of five partners." For context, fewer than 1% of such applications are denied, according California's board executive officer, Virginia Herold.


VIII. Fact: Valeant Cuts Ties with Philidor
Valeant has cut ties with Philidor a week ago but the announcement only came hours only after the nation's two largest pharmacy benefit providers, CVS Health and Express Scripts, said that they had ended all interactions with the company, citing its business practices (Source: NBC).

Conclusion
Now you decide. Is this company a fraud? Given the debt and price hike situation which disrupts its entire mode of operation, does it matter any more? Or, is this the greatest buying opportunity in a biotech in years?

Note: The author owns a small put spread in Valeant which earns a profit if shares decrease.